This week’s random topic is something that’s been gnawing at me for a while. I’ve been batting it around, trying to come up with a good way to explain it, and I think the catch is there really isn’t a good way to do it. This is one of those slightly-more-advanced writing things I either understand or I don’t. If I do... I probably already know to avoid it.
Anyway let’s see if I can stumble through some analogies and examples and hopefully make this a little clearer.
You’ve probably heard the term framing once or twice. It has to do with how I choose to present things in a story. If my character is talking about something, how they’re saying it is part of the framing. So is how people react to it—in both out loud and unspoken ways. How I choose to describe it in the text says a lot about it, too. Framing can involve a lot of subtext, and a lot of not-so-sub text.

(also, just to be clear, we're not taking about frame stories which are something else altogether that I've meant to ramble on about for a while now)

So let’s jump storytelling forms for a moment and I’ll give our first example.

In moviemaking (and photography) people talk about framing a shot. This is a very similar idea. If I’ve got Phoebe on camera, it’s how I’m choosing to set up this shot. How are going to set the edges of the shot? What’s in the background or foreground? How close are we to her? What angle are we seeing her from? Is the camera static or moving? And if it’s moving, how is it moving?

How I frame the shot affects how we, the audience, perceive this shot. It’s an added layer of meaning. A sort of visual subtext, if you will.

Here’s an example I’ve given you a few times before. Let’s say our scene is the young lovers dashing up to the bedroom. One pushes the other down on the bed and then does a sexy, laughing striptease for them. Easy to picture, yes? 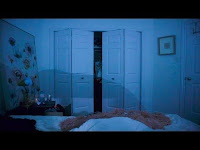 However... we’re going to frame this with a handheld camera, looking though the crack between the closet doors. As the shirt gets tossed and those pants are wiggled out of, the camera can tilt one way or another, so the audience can see as much as possible. Where things land, what state of undress people are in. But, y’know... all through that narrow crack.

And this has suddenly become different scene, hasn’t it? Not so fun and sexy anymore. Now we’re just waiting to see who—or what—comes bursting out of that closet. because there’s definitely something in that closet, right? They wouldn’t be framing the shot this way if there wasn’t somebody in there watching all this happen.

That’s kind of the key point I’m awkwardly getting at here. Things can get weird in movies when there’s a big disconnect between what’s going on in the scene and what the subtext tells us is going on in the scene. One of them will usually override the other, and since movies are a visual format, the camerawork—the framing—can override any spoken text pretty easily.

Now, a lot of time this is deliberate. That scene I just described above (and a few hundred just like it) is a pretty standard horror movie shot, especially for slasher movies. The unknown killer watches from the closet. Or maybe just that pervy voyeur they’ll yell at when he stumbles out of the closet (and then they’ll throw him out of the room and he’ll be the one who gets killed). Point is, the storytellers (in this case, the filmmakers) are deliberately subverting what should be a sexy scene by framing it in a way that make it very creepy.

Thing is... it isn’t always that way. If you’ve ever followed along with Saturday geekery on Twitter, you know one of my common complaints is when inexperienced filmmakers try to copy a shot from another movie without really understanding why it worked in that movie. I’ve seen folks do the “peeking out of the closet” shot or the “looking through the window from outside” shot and they did it because, well, that’s how you film sexy scenes in horror movies, right? Wasn’t it super hot when she was swaying at the end of the bed and pulling open her...wait, what? You thought it was ominous? Why? Now suddenly the film is stumbling because the sexy scene is creepy as hell but it was supposed to just be... well, sexy.

And the audience will sense this screw-up. Even if we don’t always know the syntax or conjugation, so to speak, we know enough filmic language to realize something wasn’t landing right there. We’ll figure out eventually from context (y’know, when something doesn’t come out of the closet), but that stumble is going to break the flow and throw us out of the movie as we try to figure out what’s actually going on. Was this a creepy scene or a sexy scene or what? How were we supposed to feel about it?
And we can frame things in our writing, too. We can layer in that subtext through our characters and their reactions, our story structure, even just with with our vocabulary choices. We can make insults sound like compliments, word something innocent so it could be flirty, make it really clear how weak that guy making the loud, angry speech is.

If we’re not careful when we do this, we can end up with that same stumble I was just talking about inexperienced filmmakers causing. If Yakko just insulted Phoebe but my word choice makes it sounds a little too much like a compliment, even though we know Yakko wouldn’t compliment her... well, wait, what’s going on? Or if everything structure-wise says this is when I learn if Phoebe is the super-werewolf or not and instead it’s revealed that we first went to the Moon in 1969... I mean, that’s not remotely the answer we were looking for. It’s not even really an answer. It’s just a random fact. Is it even relevant to this story? And why is it in italics? Why are we emphasizing it? Did somebody think the Moon landing was in some other year?

I know this is one of those things that sounds kind of silly and self-apparent, but I’m surprised now often I’ll come across it. A writer pretty clearly trying to do X, but they’ve set everything up as Y. Unusual framing. Odd vocabulary. Weird emphasis. Things that feel like they’re meant for a different version of this scene. And like with the films, I think these writers are trying to copy something they saw work, but haven't quite worked out why it worked.

And that’s why this is a tough thing to explain. It’s hard for me to say “make sure you’re using the right subtext for your scene” when I don’t know the scene or the subtext you’re currently using or the effect you’re trying to create with it. It’s going to be different for every writer, every project, every scene.

Okay, I know this hasn’t been super-helpful, so let me toss out a few last suggestions that should make it easier to avoid this issue.

1) Know what words mean—This should be a serious basic for any writer. A bad habit most of us start with is running across words we don’t know and kinda getting their meaning from context, and then using them as we kinda think they’re intended. Which, no surprise, can cause real confusion for people who actually know what the word means. And that’s not even taking into account that I might spell it wrong and spellcheck swaps in some other word altogether. Which I also don’t know.

2) Know how this is supposed to make my readers feel-- is this a sexy page or a scary page? Funny or creepy? Should my readers be tense or fascinated? If I don’t know how this bit’s supposed to make them feel, how can I get any sort of emotion across on the page? Bonus—knowing this should also help me figure out if any moments are particularly jarring. Not in the way I might want.

3) Work on my Empathy-- I’ve said it before and it’s still true. I need to understand how other people are going to react to things. If I don’t have a good, honest sense of how this character’s going to be received, how that line of dialogue’s going to go over, how my readers will react to this beat or that reveal... well, it’s going to be tough to tell a story. I need to be able to put myself in other people’s shoes so I can take a look at my work and say “Wow... if I do it like this, the readers are totally going to think someone’s in the closet watching Chris and Pat.”

Anyway... this was a little rambly, but hopefully you got something out of it.

Next time... look, I’ll be honest. I’m not sure there’s going to be a post next week because I’ve got a four or five hour drive on Friday and then a talk about worldbuilding. Plus—if you hadn’t heard-- I had a new book come out last week and I’ve been a bit overwhelmed. Which means now I’m playing a bit of catch-up. But I’ll try to get something out, if time allows.