Hey, everybody. Many thanks for your patience while I sorted out family crisis stuff.
And, jeeez... now it’s three weeks until Christmas.  What the hell...?
Anyway, I wanted to take a quick minute to talk about something I used to screw up a lot—word choice.
I know I go on and on about spelling and vocabulary a lot.  To be honest, I make a point of working it into the schedule every four or five months.  I’ve mentioned before how many editors, script readers, and contest directors mention spelling as one of the main problems in a manuscript.
Thing is, if I want to be taken seriously as a writer, I need to know my vocabulary.  Not guess or generally understand or depend on my spellchecker—know.  Because there are lots of subtleties to any language –especially a crazy, messed up one like English.  One word can have a slightly different meaning than another, and that difference can have a huge impact on how that sentence or paragraph is understood by the reader. 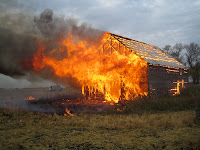 In my current project, there’s a big gun fight in a barn.  Between three different groups.  And did I mention that the barn’s on fire?  There’s a lot of stuff going on, and it’s a big, loud moment.
And it made me look at my “loud” dialogue descriptors, because I realized the tone of the fight didn’t feel consistent.  Some people sounded angry, others scared, and a few almost seemed... well, bored.
Check it out.  Here’s the same line of dialogue a few times with a different “loud” descriptor on it.  Take your time, pause between each one, and read through them...

D’you notice how they all have a slightly different feel?  Shouted and called out feel kind of low-energy with screamed between them.  It just seems a bit more urgent.  Shrieked gives the line a bit of desperation, whereas bellowed makes it sound kind of like a demand or order.
Y’see, Timmy, this is that subtlety I was just talking about.  I’ve seen these words used lots of different places, lots of different times, so I’ve picked up on the distinct use.  And I’ve taken the extra step of looking them up—I want to know what the words mean, not just have some vague idea.
Because if I only have a vague idea what words mean, I’m only going to be able to create vague scenes with vague emotions.
And nobody’s going to connect to that.
Next time, I’d like to reminisce about a wonderful talk I once had with one of my favorite screenwriters.
Until then, go write.