Where The Problem Is

A quick pointer...
Every now and then I throw open the floor here to suggestions.  What would people want to hear me ramble on about next?  What topics or elements are giving them trouble in some way, or maybe they just want a few pointers on something?  Pretty much every time I do this, someone will ask about agents or networking or publishing, and I will politely explain I don’t cover that stuff here. 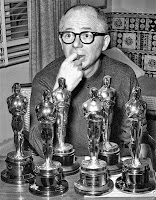 Why?
When asked for screenwriting tips, Oscar-winner Billy Wilder would often remind would-be writers of a simple rule of thumb.  To paraphrase, a problem with your third act is usually a problem with your first act.
In other words, if the end isn’t working, it’s probably because of the way I did things in the beginning.  Perhaps I didn’t establish characters well or set up things for that twist.  Maybe the gruesome, depressing ending just doesn’t work after two acts of comedy and slapstick.
My career as a writer has three acts, too.  A beginning, middle, and an end.  I learn the basics and practice a lot.  I write a good book.  Someone gets interested in the book and offers me money for it (either in a contractual or individual sense).
So if I’m having trouble with that last part, the third act of my writing career, maybe the problem is in my first act.
Maybe it’s not that publishers and agents are jerks who won’t recognize my genius or try anything new.  Perhaps the problem rests in that first part of the equation.   Do I even know my basics?  Did I bother to practice and polish my skills?  Or did I declare the first thing I scribbled out perfect and leave it at that?
It’s just possible, believe it or not, that I can’t get anyone interested because I didn’t write a good book.
Next time, I’d like to share some thoughts about a new topic I’ve been researching.
Until then, go write.
1 comment: