Oddly enough, not a Halloween-themed post. Although... maybe it is. It’s all perspective, I guess.

Since I first started taking this whole writing thing seriously, there’s been a general mindset I’ve seen bubble to the surface once a year or so. Maybe more in some places. It’s the idea that I can’t write about X if I haven’t personally experienced X. Can’t write it well, that’s for sure. If X hasn’t been an integral part of my life at some point or another, I’m just wasting everyone’s time by trying to write about it. Definitely by putting that writing out there. It’s a version of the old “write what you know” superball that gets bounced around. If you’ve never known X, you certainly can’t write about X.

Starting out in the horror community, I’d see this again and again. The folks who’d insist it just wasn’t possible to write horror without a horrific, awful background. You want to write horror? Real horror, not this weak “vampires and demons and zombies” crap? Well you better have fought in a war and had several people killed in front of you. Or had a horribly abusive family. All your pets better be dead, and most of your friends too, and if you’re not dealing with it through life-crippling addiction to something, you’re just a goddamn tourist who has no business in this genre.

Because of this, I’d see some folks get scared off from their chosen genre. Have I experienced real, soul-wrenching love? I mean, really experienced it? Maybe I shouldn’t be writing romance. My parents loved me a lot, I get along well with my brother, and I’ve got a bunch of really cool friends. Maybe I don’t have any business writing horror. And, heck, I’ve never even killed a human being before. I guess murder mysteries really aren’t for me.

And a friend of mine recently pointed out this is such a pervasive idea that even some readers believe it. There’s no way I could write about a character that awful unless I myself am truly that awful, right? I mean, somebody couldn’t just make that stuff up, right? If one of my characters has sex more than twice, I’m clearly a sex addict (and let’s not even talk about what their chosen sex position says about me). Heck, I think I’ve talked before the weirdness that can happen when you name a character after a family member or friend without thinking about it.

Now, before I go any further... as I mentioned above, this has all been proven wrong again and again. Seriously. Yeah, there’s definitely some horror writers out there who’ve seen some awful stuff and I’ve known one or two folks over the years who’ve written intense erotica as an outlet when, y'know, no other outlet was available. There are some action writers out there who have very intense backgrounds in the military or private security, and a few sci-fi writers with pretty solid scientific credentials.

But I also know a ton of horror writers who had really nice childhoods and now live very happy lives, without a single dismemberment or traumatic beating or other ghastly event in their past or present. I know action writers who haven’t been in a single barfight or high speed chase or gun battle. I know people with no military experience  who write very successful military books. There are more than a few sci-fi writers who haven’t traveled in time or even left earth orbit once. And I know people who write sex scenes in their books who have, if I may be so bold, fairly vanilla sex lives. At least, going off all the pictures one of them showed me. Like, insisted on showing me.

That was a really weird brunch.

I think all of this ties back to a few things I’ve talked about here a few times. So I thought  maybe it’d be worth mentioning a few totally valid ways we can write about things we haven’t actually experienced. For example...

Voice—A big step for all of us is the day we realize midwestern grocery store clerks don’t talk the same way as third-generation bio-apocalypse survivors. Dwarven warrior queens have a different vocabulary than techbro CEOs. And fresh-out-of-grad-school schoolteachers don’t sound the same as battle-hardened Army sergeants. And getting that voice right, knowing how she’d say this vs. how he’d say it vs. how I'd say it is a big step in our growth as writers.

Research—seriously, we live in a freakin’ golden age of resources for writers. I’ve been doing this just long enough that I remember ads in the back of magazines for small press books about what it’s really like to be a doctor or a homicide detective . Or I’d spend hours in the library trying to find pictures of that didn’t involve the or a museum. These days, if I need to know something I have access to so many sources. I can find research papers or anecdotal accounts or heck, even actual people who will answer my questions or help me find the answers, and usually tell me some other useful things if I’m paying attention. 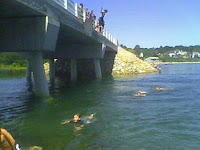 Extrapolation-- I’ve never been shot in the knee, but I’ve had the meniscus behind my kneecap rupture (and collapse again and again and again). I’ve never done super heavy drugs but I’ve been very drunk a few times. I’ve never been able to fly, but when I was a kid there was a bridge in my hometown we all used to jump off into the river. Yeah, these experiences aren’t the same, but I can use them as building points. If this registers as a six, what would a nine be like? If it felt like this for ten seconds, what would it feel like after twenty? Or thirty? I stayed conscious here but would that much short out my brain for a few seconds (from pain or pleasure or excessive introduced chemicals)? It’s a basic creativity exercise.

Empathy—I’ve talked about empathy here a few times, and I have to say once again it’s the most important trait a writer can have. Seriously. It’s what everything here really boils down to. Being able to put myself in someone else’s shoes. I’ve never had a parent die, but I’ve had friends who did. I’ve never served in the military, but I have family who did. I’ve never been married or had kids or burned dinner when someone’s coming over I really want to impress. But I look at my friends and family, I listen to them, I take note of what they’re saying and what they’re not saying, and I try to relate it to things I’ve gone through. I try to imagine how I’d feel in a similar situation, based off my own experiences. And I use some of that in stories.

In fact, let’s take this one step further and address one of the points that started this off. If I’m going to tell someone they can’t write great horror unless they’ve been through awful stuff (like I have)... well, isn’t that kind of implying I don’t have great empathy? I mean, think about it. I’m saying I can only write this because I experienced it, and I’m also admitting I can’t imagine being a person who can write it without experiencing it.

Maybe it’s just me, but I don’t think that’s something I should be bragging about.

Y’see, Timmy, much like “write what you know,” this mindset assumes people can’t learn or grow or imagine anything. And if I want to be a good writer, I have to be able to do that. I can’t tell myself not to write about bank robbery until I’ve actually tried to rob a bank. Hell, where does that people who write murder mysteries? Or giant robot sci-fi? Or dark period fantasy. I mean, if you haven’t had sex with at least three people from the twelfth century, how do you expect to write medieval romance? I need to understand most writers research things, extrapolate feelings and reactions, get inside their character’s heads, and just try to have an honest sense of what someone else would feel in this situation.

Look, the truth is, if I’m doing my job right, you should feel like all my characters are real people in real situations. The janitor. The nymphomaniac barista. The half-human, reluctant cultist. The little kid with PTSD. The burned-out secret agent trying to forget most of his life. The world-ending cosmic event that they’re all tied up together in. And when we read a description of a real person, when we hear about the believable, relatable aspects of their life, it’s natural for us to assume they’re... well, real.

And the obvious real person is me, the author, telling you this story. So it’s not surprising some people think I must’ve experienced these things firsthand.

But I shouldn’t need to.

Next time, I want to throw a bunch of characters at the wall and see which ones stick.