I wanted to talk a little bit about horror today, as I tend to do around this time of year. More I thought about it, though, I was having trouble thinking of an aspect or angle of horror I haven’t done before. Sometimes more than once. I’ve talked about sub-genres of horror. Talked about monsters. Talked about the victims.

So then I thought I’d talk about the mechanics of horror. But even that’s tough because of the wide and varied sub-genres. I’ve mentioned this before. The horror of Frankenstein is not the horror of, say. Experimental Film by Gemma Files which is not the same as Bradbury’s Something Wicked This Way Comes and none of those are The Devil's Rejects. Depending on what kind of horror I’m aiming for, I could be trying to do some very different things. Which means different rules and guidelines and expectations.

And this made me think, of course, about comedy.

Structure-wise, comedy’s a lot like horror. It’s got many levels and subgenres. It can be subtle and nuanced or in-your-face blatant and over the top. It’s really common for people to like one form of it but not another. I  also think they’re both something that’s kind of ever-present in our lives, on some level or another. There’s a lurking dread or a potential for laughs in almost any situation.

I made what I thought was a semi-clever observation about comedy a while back, and I think the same parallel holds for horror as well—scary is to horror the same way notes are to music. One is made up of the other, but just having a bunch of those components doesn’t automatically make the bigger thing. Just taking a big pile of “scary things” and dumping them on the page doesn’t mean I wrote a horror story, in the same way that, well, having a big pile of meat and bones doesn’t automatically give me a person.

See? That was kind of creepy, right? So is this post a horror story now? No, of course not. No, not even if I add a jump scare. Or is it? Maybe as we keep going you’ll realize how I’ve lulled you into this false sense of security and then maybe you realize... you’ve been in this horror story all along.

Also, it kind of matters what’s in that pile. I can’t just have a big pile of bones, especially the same kind of bones. A big pile of skulls definitely isn’t the same thing as a person. I also can’t mix in random horse bones or gorilla muscles or insect DNA. I can’t just shove anything in there and expect to end up with a working person (or horse, or insect). And even when I get all those components right, they can only go together a certain way. These bones go here, those muscles connect there, that part... okay, look, that’s kind of optional. You can put it in or leave it out at your discretion, just remember what you did with it.

This might seem kind of boring, just putting together a person. Makes it sound like every person we make is going to be like every other person. And on some level... yeah, they are. There are a lot of basic similarities between people, but there are a lot of differences, too. Yeah, even on this basic constructional level. And even more so once we get to know them.

Also, quick pause before we move on. Please don’t get confused by my use of a body as a metaphor for a story. If I’m writing horror, yeah, obviously mixing horse parts with human parts can be an element in a great story. Mixing in some insect DNA has been the basis of several great horror stories. But that’s talking about things in the story, not the structure of the story itself. To fall back on said metaphor, that’s me focusing on an individual bone and saying there’s absolutely nothing wrong with it while ignoring the fact said bone is in a pile of meat that used to be a person.

Or that I’m trying to tell you is still a person...

So, anyway, how do I do this? How do I figure out which parts I’m going to sew together into this new person a.k.a. story? Which ones do I want in there, which ones need to be in there, and which ones... okay, look, the antlers are cool, yes, but people don’t have antlers. No antlers!

A lot of this is going to depend on two things. Knowing what I want to end up with and general empathy. The first one’s easy. Once I know what kind of horror story I want to tell, it’s easier to choose the parts I need to tell that story. Yeah, there’s some general stuff I’ll need, but after I’ve got the rough framework there I can start fleshing in (so to speak) all the little details and elements that are going to make this story unique. And this can be a multi-step process. I don’t need to get it all right on the first try, I can go back through and shape the story to better be what I want it to be. 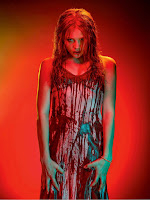 The second part, general empathy, is a little tougher. As I’ve said here once or thrice, I can’t tell you how to have empathy. But it’s sooooo important in horror, because I need to know what my audience is expecting and I need to understand how they’re going to receive these elements in my story. Is that person being sprayed with blood and gore and slime supposed to be horrific? Awful-but-funny? Mildly erotic? Am I sure my readers are going to take it the way I intended it? Because having a beat land wrong can really kill the flow of my story.

And that would be... well, horrible.

So there’s some quick thoughts on horror. Should be easy for you to swallow, now that they’ve been deboned and cut into little bite sized chunks. Yeah, some of them are still moving, don’t worry about that...

Narrator: And as they choked down the morsels, they realized... it had been a horror story all along.

Next time, we could probably talk real quick about NaNoWriMo.

Until then... I’m not letting you out of the room until you swallow every last piece of this.

I mean, hahahahaaa, go write. That was it. Go write.