Oh, hey there.
So, if you’re one of the hundred or two regular readers of this space, you may notice this past year’s been a little... sparse. Not quite the standard level of output for this blog. Normally by this point in the year I’d’ve made at least a dozen posts, and I think this one makes seven so far for 2022.

It’s not for lack of topics. I’ve got two or three on deck, plus a nice question about foreign languages someone asked in the comments a while back (thanks, Oliver!). And I’m sure I’d end up with one or two more by the time all those are done. Saturday geekery usually spawns a good one every other week or so. 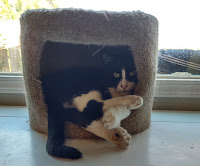 Truth be told... I’ve just been fried. Since 2022 started I’ve traveled for the first time in two years. I’ve been reading books for blurbs. I’ve been trying to work on my new novel and also the novel after that and a pair of short stories for different anthologies. There were a few vet visits (cats are all fine, no worries) and a new kitten who can be VERY loud sometimes (often in the middle of the night). Taxes are coming up and I still have a ton of work to do to get those even semi-organized. And of course, I had a new book come out—The Broken Room—which is a whole big thing in itself. Many thanks to those of you who may have read it and left a kind review someplace.

And, yeah, I know a lot of this is just what a pro writer’s supposed to be doing. Juggling stuff and scheduling time and making it all work. I’ve been doing it for many years now. But these past few months—since the holidays, really—I’ve just been friggin’ burnt. And like a lot of folks who hit this state, I’ve been letting one or two things slide. Not intentionally. It just sort of... happened. And this blog was one of the easiest things for it to happen with because...

Well, let’s be honest. This has never been a major stop for the general writing community. I really, truly appreciate all of you who’ve found your way here over the years, but I also see the numbers and I know this has never been a super popular spot. I’ve had plenty of off-the-cuff tweets that get far more visibility and interaction than posts I’ve spent multiple days working on. I enjoy doing this, but if something was going to slide it was bound to be the thing that feels like it's got the lowest work/return ratio.

So I’m going to try to take a little time, maybe the next two or three weeks, and just try to get myself back to a place where I can get all those balls back up in the air and keep them there. I know I can do it. I want to do it. But one thing most people don’t realize about juggling is that it’s a serious arm workout. And you can only do any workout for so long before you either collapse or start getting kind of distorted.

This weekend I’m going to be at WonderCon in Anaheim. I’m hosting the Writer’s Coffeehouse on Sunday (11-1:00) where I’ll be talking about publishing, answering questions, and trying hard to be educational and entertaining. If you happen to be there, please stop by and say hi.

Next time... we will talk about languages. I promise. And I’ll make sue you all know when it’s up.