As I mentioned the other day, I just moved.  And, in moving, realized how many LEGO sets I have.  A huge number of them unopened and never assembled.  A few of the huge ones, but also some small, simple ones. 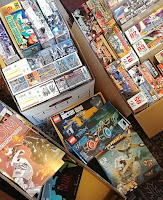 Plus there were a ton of Gundam models.  Truth be told—I’ve seen maybe ten Gundam episodes ever.  But I’ve loved the models since I was a little kid. They were peak “Japanese robot” to thirteen year-old me.
And so much Warhammer stuff.  Age of Sigmar and 40K. I got rid of maybe two hundred models before the move and I still have a whole bookshelf filled with armies and scenery and rulebooks.
Books.  We won’t even talk about all the books.  There’s going to be an actual library in the new place.  Screw having a guest bedroom, that room’s getting floor-to ceiling shelves all the way around.  And we’ll probably fill them.
Why do I mention this?
Aside from further establishing my geek cred, that is....?
I’ve mentioned before that I worked with a physical trainer years ago, and he stressed the need for balance a lot.  Some days were more reps, others were more weight.  Some days favored arms and shoulders, others favored legs and core.  Losing weight and getting in shape was about working the whole body.
Because we’ve probably all seen someone who doesn’t balance their workouts.  The almost-hunchbacked guy who works his chest, but never his back.  That person who always skips leg day.  Someone who runs marathons but never hits the gym.  These folks end up getting a bit... distorted.  Out of proportion.  Sometimes it’ll actually change the shape of their bodies.
More to the point, it starts hindering what they originally set out to do.  The guy overworking his chest ends up drawing attention to his tweaked posture.  The marathoner has a harder time because their arms are weaker and have less stamina.
Figure out where we’re going with this yet?
I encounter people sometimes who do nothing but write.  Write, write, write, write.  I’ve seen writers brag about never taking a day off.  I had one guy dismissively tell me once that “real writers don’t have time to read.”

This is just my personal opinion, but I think the brain works a lot like the rest of my body.  In some aspects.  I can exercise and train it to get better.  But I can’t over-focus on just one part.  That’s when things get off balance and grow... well, distorted.  Deficient. They stop functioning correctly because I’ve overworked that one aspect without working anything else.
I build little toy soldiers and Gundams and LEGO sets.  It lets my brain focus on shape and color and spatial relations.  I make it solve completely different types of  problems
I know a lot of other writers who play tabletop and miniature games.  And video games.  I know some who paint or draw.  I also know writers who cook, run, do martial arts, play basketball, garden, refinish furniture—I even know one who fences.
And despite doing this other stuff, they’re all very prolific.
A few years back I was having a serious writing problem.  I’d just signed a new contract with a publisher, but I constantly felt stressed and overwhelmed.  And it had an effect on my writing.  It was so hard to do anything.  To focus.  To hit word counts. 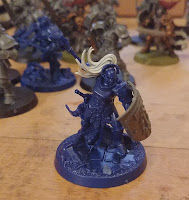 I solved it by setting a firm rule for myself.  A mandatory day off.  Every Saturday, no matter what—take the day and recharge.  No writing.  I watch movies, build some of those toy soldiers, or maybe go for a long walk.  I have a couple drinks and post funny comments on Twitter.  Maybe all of the above.  I cook dinner for me and the lovely lady—a dinner that requires cutting and peeling and setting timers and all that.
And it helps.  It really does.
He said, as he dove into his eleventh (arguably twelfth) novel.
So take a moment.  Take a breath.  Try doing something else—anything else—and exercise a few different mental muscles for a change
Next time... a few more thoughts on chosen ones.
Until then, go write.