I first heard this story many years ago under a different title—the slutty new idea—and while the story/idea is very true, in retrospect I’ve realized the original title is unnecessary and also doesn’t make a lot of sense, if you think about it. It’s implying there’s something wrong with the idea even though the writer’s the one being a bit *cough*cough* promiscuous here. And I don’t want to be one of those people blaming someone else for my behavior. Hopefully you don’t want to be that way either. Plus, I’ve seen it bandied around  a lot more lately as the shiny new idea, which makes a lot more sense. It’s something new and eye-catching and...

Well, let’s talk about the shiny new idea. The story goes something like this...

I, the writer, am out with my story. Maybe it’s a novel or a screenplay or a comic book script. Whatever it is, I’ve been with this story for a while now and I’ve fallen into a good pattern with it.

Perhaps too good. Maybe a bit of a rut. I just don’t have the enthusiasm for the story I once did. There was a point that it was fun and playful and exciting and all I could think of, but as of late... well, the honeymoon’s over and now it takes some effort to get anywhere with my story. Things aren't bad, mind you, they've just become a bit... rote. Maybe even mechanical.

So, anyway, the story and I are out and about and that's when I happen to notice a shiny new idea across the room. It’s big and bright and it’s got that look to it that just says “hey, you know it’d be fun to tumble around with me for a while.” It’s got a sharp edge to it, and it’s showing just enough I start thinking about all the parts I’m not seeing, and all the fun this idea and I could probably have together. Just looking at it, it’s clear that is the kind of idea a writer’s supposed to have, not the dull thing I’ve somehow ended up with

In fact, let’s just take a moment and be honest with ourselves. That’s how we all want things to be with our ideas, right? It’s what movies and TV shows and so many twitter threads have assured us the life of a writer is like. It’s supposed to be this wild and spontaneous and intoxicating relationship we just can’t get enough of. We want it to keep us up late and wake us up early so we can get right back at it.

Wait, what do you think we’re talking about? No! This is a writing blog! Get your mind out of the gutter!

Anyway, a lot of us know the simple truth of the shiny new idea. Sure, it’s fun and exciting at first, but then one of two things happens. Sometimes we find out there’s not really anything else to it. Oh, that first weekend is fantastic, maybe the week after it is pretty cool, but it doesn’t take long to realize the shiny idea is... well, it’s a bit shallow.  We had some fun, but after a couple days we realize things just aren’t going any further.

On the other hand, things might work out with me and the idea. The passion fades a little bit, but I’m still giving it my all and getting quite a bit in return.  Eventually the two of us settle down into a comfortable story together. And just as I realize things are becoming a bit of work with my story, the two of us are sitting down one evening and I happen to notice a shiny new idea hanging out over at the bar...

Again, we’ve all been there, yes? Hell, I’m there right now. I’m working on this big six-book outline/ pitch document and yesterday I was filling Keyser holes in the lawn and had this whole new book idea pop into my head. So I went inside and scribbled out three pages of notes and oh, look, haven’t gotten much done on that pitch document today, have I? 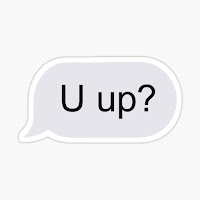 There’s also a sad parallel to the shiny new idea which I’ve come to refer to as the booty call idea.  This is the idea I used to spend a lot of time with, but now I don’t for one reason or another. Maybe we needed some time apart. Maybe it just wasn’t working out, and I couldn’t figure out how to make it work. It’s possible the idea and I just admitted it wasn’t going to work and decided to call it quits.

But, sometimes there I am late at night, and that idea looks kinda sweet again. There’s definitely some things I could do with it. Nothing serious, mind you, just a writer and an idea playing around, having some fun, no pressure. Yeah, there’s probably other things I should be working on, but one night won’t make any difference, right? Heck, not even the whole night. Just a couple hours to ease back into it and take care of that little itch I’ve had. And maybe this time it’ll be different.

But more often than not, come morning I just feel a bit guilty about the time I spent with the booty call idea when I should’ve been, well, doing other things.

Y’see, Timmy, it all comes down to focus. As I’ve said here once or thrice before, writing isn’t always going to be fun and fast and exciting. Sometimes it’s going to be work. There are going to be times when the days blend together.

But if I stick with it and don’t chase after every little idea that flashes me a bit of plot, I find that most of the days are going to be good ones. And more than a few will be fantastic.

Don’t chase after the shiny idea. Resist the urge to check in with the booty call idea. Don’t ignore them or forget about them, but don’t let them interfere with what you’re working on right now.

Okay, before we get to next time, this weekend is WonderCon! They’re now celebrating their second virtual year, and they’ve got a bunch of stuff lined up. For example, Saturday at (Pacific Time) we’re doing a virtual Writers Coffeehouse, where I’m answering questions about writing and publishing (and I convinced Sarah Kuhn, Stephen Blackmoore, Fonda Lee, and Greg VanEekhout to join me).

And then starting at on Saturday it’s... Saturday Geekery, WonderCon edition. We’re going to watch some wonderful movies together, like Thirteen Ghosts, Solomon Kane, and John Carter. It’s going to be tons of fun, with hashtags and other writers and stuff like that. Feel free to follow along (most of them are free to watch on Tubi or Disney+).

And next time here... I think we need to revisit a core issue. You know witch one.