...A Very Good Place to Start

Last week I mentioned I was starting a new project. A huge one. Easily the biggest thing I’ve ever done and very  probably the next two or three years of my life.

To call it intimidating is a bit of an understatement. It’s been ridiculously easy to find other things that I need to do. Not that I’m avoiding it, of course, it’s just... look, I’ve needed to paint these Space Marines for a while now. And, if you missed it, I bought a Shogun Warrior to restore, a Raydeen like I had when I was a kid. Not to mention, I really need to spend more time with the cats. They’re feeling a bit neglected, and I think I’m making some real headway with Doctor Wade . Heck, we haven’t even discussed all these ranty blog posts.

Okay, yes, I’ve already started the big project. But I’d be lying if I said I didn’t think of other things I could be doing. Or maybe some I should be doing.

I mean, let’s be honest. There’s arguably a ton of stuff I need to do before I start a project. I should have a rough idea of who my characters are and what they want out of life. At least a bare-bones sense of a plot. Which could mean some degree of research.

Plus, it wouldn’t be the worst thing if I knew what my chosen genre’s expectations are. Or had a notion of what’s been done before in it.

If you’ve been following this collection of rants for over a year, you may remember the A2Q. It’s a dozen long-ish posts about how to take a novel from the bare bones idea through to a finished manuscript. And almost two-thirds of them were things to do before we started our first draft.

When we get right down to it though, there’s only one thing I really need to do to start a new project. And just based off my own experience (and some experiences I borrowed from other folks) it’s probably the toughest thing. I know I used to get caught up on it a lot.

So what’s the all-important, ultimate step to writing a project?

We start writing it.

I know that sounds stupid but, well, it really is what it comes down to. I can do a lot of research and practice and character sketches and pin a hundred index cards up on the wall with different colored yarn. I can block out scenes with action figures and act them out with friends and take long walks where I have silent conversations with myself. But at the end of the day... I have to start writing it. Until then it’s just prep work at best, procrastination at worst. 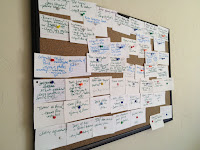 I know some people might take offense to such a statement and insist all those character sketches 100% count as writing. And the multiple outlines. And the four months of research. To which I say... sure, of course it does. Again, I wrote around 25K words last year about all the prep work you can do before starting a first draft.

But I also wonder why some of these folks are so quick to take offense. I mean, at least four or five times a year here I point out that my method is my method and your method is your method. No problem at all. But if the mere suggestion that my wall of index cards doesn’t count as writing gnaws at me that much... maybe it’s because I know it doesn’t?

Two or three times here I’ve told the story of Jerzy, a personal trainer who helped me to lose a lot of weight by just pointing out all I had to do was follow the schedule he’d given me. I could come up with a lot of reasons for not doing it or to put off doing it or... I could do it.

Yeah. It’s scary and it’s work and it’s a commitment. And we all want to do it right, to create something fantastic. We can always find good reasons not to start, to put it off, to convince ourselves we’re not quite ready to do it yet. Because it’s going to be tough.

But it’s going to be a lot easier than trying to lose sixty pounds was, believe me.

Next time, I’d like to revisit that idea of throwing rocks at people in trees. Even if you’re doing it for a good reason.