So, I figured I’d start the year—y’know, really start it—by talking about a word that gets tossed around a lot in writing circles. I also think it gets kinda mystified a lot and sometimes talked about in hushed tones like it’s some secret, sacred thing. The word is process, and I wanted to babble for a few minutes about mine and yours.

Really simply put, process is how I write. It can refer to using elements like outlines and character sketches, but it can also refer to where I write and when. Maybe even what shoes I like to wear (or not wear). All of this is part of our process. I’ve talked about the Golden Rule here a bunch of times, and it covers a lot of what we’d call process. It’s a lot of the personal aspects of writing, the preferences and rituals we all have.

I think I’ve mentioned my mom’s old electric typewriter once or thrice, the machine I wrote some of my very first stories on. It was this massive Smith Corona, probably weighed fifteen or twenty pounds, and the hum when you turned it on would actually make the table vibrate. The typebars hit the paper hard enough that a letter with a closed loop (like o or p for example) had maybe a 30-40% chance of punching a hole through the paper.

I had this little toy monster I’d always perch on top of the typewriter. I’d bang out words (literally), and every ten minutes or so the monster would shake its way down , and bounce off the keyboard. I’d have to stop typing, pick it up, and put it back in place. It was with me for all those early short stories and very bad comic book scripts and embarrassing attempts at a novel. I wrote all of them in little ten and fifteen minute bursts, pausing to put the monster back up on his perch.

Weird as it sounds, that was part of my process as a little kid. It was just something I did that made it possible for me to write—or write easier. I’m not saying I couldn’t write without said little toy monster (eventually I did), but at the time it was part of my regular ritual that let me get to the actual writing part faster and easier.

You may have heard about people who only write at night or early in the morning. Some folks where comfy sweats or bathrobes, others get fully dressed, and I know some who claim they don’t even bother with pants. There are people who can write absolutely anywhere and others have their writing space set up exactly how they like it. Some folks have coffee before, during, or after writing. Some have water. Some have booze. 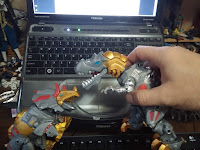 And of course that’s not even getting into the more technical stuff. Do I like outlines, and if so how much of an outline? Do I use notecards? Do I make character sketches? What software do I use? Or maybe I’m old-school and use a legal pad. Or an old electric typewriter. I used to know a guy who blocked out all his scenes with action figures and Matchbox cars. We all have our own feelings about these things and use them (or don’t use them) in our own way.

Because that’s what process is. It’s whatever gets me to the actual act of writing while causing the least amount of stress. And it’s unique for each of us. We all have our own process. There may be overlaps. You may notice commonalities. But my process will always be mine, yours will always be yours.

There’s a kinda-joke I tell at the Writers Coffeehouse a lot. If the only way you can write is on one Sunday out of the month you strap yourself into that “enhancing” corset you got at the ren faire last summer, stand on your head, and then use voice dictation software, but you write 30,000 words that day... well, that’s fantastic. Power to you. You’ve found a process that works friggin’ amazingly for you. Granted, it’s probably not going to work for anybody else but it doesn’t really have to. It’s your process.

I think one of the reasons process gets mystified sometimes is because... well, there are folks who use their process as a reason not to write. Not so much a reason, really, as an excuse. Consciously or not. I mean, I can’t wear the corset twice in a row. Plus that’s a specialty item, y’know it’s dry clean only. I’m not going to have time to get to the dry cleaners until next week at best, and then they’ll have it for a couple of days and, look, next month is going to be all about the writing, okay?

Yeah, that’s my goofy joke again. But I’ve heard some folks describe a process that’s so specific, so elaborate, or so both that it’s almost impossible for the conditions to ever be met. “I can only write on days that have an R in their name, and only after being served rare Himalayan tea boiled at precisely 100 degrees centigrade and served to me by a left-handed supermodel. No, not one of those ’s Secret trollops. At that point I’ll be ready to begin my research into possible dietary limitations of the supporting character’s great-grandmother. I might not need it for this bit of flash fiction, but I feel it’s important to know than not know...” These folks need 200 page outlines for 35 page short stories. They wait for inspiration or the mood or the right lighting at their computer. They always have one more book or article to read for inspiration or education or clarification.

And again, to be perfectly clear, if this is what you need to get words down—and you happen to know a couple supermodels who like serving tea—again, power to you. Your process is your process. It’s whatever helps you write.


But, I’d suggest that if overall my process stops me from writing more than it starts me... I may want to reconsider a few things. Because to my mind, that’s a bad process. It’s not making things easier, it’s putting up obstacles.

Now, speaking of process... I had an idea I wanted to bounce off those of you reading this

(analytics tell me there’s a couple hundred of you, although I’d guess a percentage of those are bots with no real interest in improving their dialogue or story structure).

I was thinking of doing a kinda-series-thing here on the blog, something with its own keyword or whatever so it’s easy to find, and going through the whole process of writing a book from beginning to end. Start with a raw, basic idea and finish with something ready to send off to an agent/editor. It’s all stuff I’ve talked about before, but I figure this is a good excuse to revisit a lot of it in order and freshen up my takes a bit. It’d probably be every other or every third post, so there’d still be space to talk about other topics as they occur to me (or you).

Would that interest anyone? Please let me know down in the comments (or over on Twitter) with a yay or nay or something. 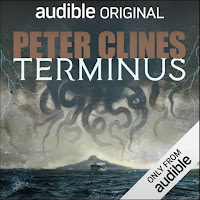 Oh, and by the way--my new book Terminus is up for pre-order over at Audible (and maybe Amazon?). It comes out in three weeks, but please feel free to add it to your lists and carts now. You can read more about it over at Audible and I also talked about it a bit in the FAQ (which I really need to update sometime soon...)

And one last note. The Writers Coffeehouse is this weekend at Dark Delicacies in Burbank. Sunday, to three. Come join us.