I’m posting this one a bit early because... well, hopefully you’ve all got other plans for tomorrow.  I know I do.  Alita: Angel is finally out.  And also some book about zombies on the moon...
Oh, yeah, and it’s Valentine’s Day tomorrow.  With all the fun activities we associate with said holiday.  And that’s kinda what I wanted to talk to you about...
Look, you’re getting to that certain point in your writing career.  Your voice is developing.  Your body is changing.  Your facial hair is growing out nice and thick, which is probably a big change for most of you women.
Anyway, I figured it’s time we sat down and talk about... well...
Writing sex scenes.
Yeah, this is going to be a little awkward for all of us.

Like sex itself, a lot of this is going to come down to our own personal preferences, comfort zones, and what works in a given situation.  As such, it’s going to be really tough to offer any specific advice about when and where and how these moments should happen in your book.  I’ve tossed out some general suggestions in the past if you really want them.
What I wanted to talk about here is more of the act itself, so to speak.  Writing sex scenes is a tricky skill to master.  It’s a constant balancing act of too much and too little, exciting the reader or maybe horrifying them, and it’s ridiculously easy to make people roll their eyes (not in the good way).
So here are three big things I think should be in mind when writing a sex scene.
First is that we don’t always need to show sex happening in order for sex to have happened.  Subtlety and nuance are a huge part of sexiness—on the page and in real life.  If we know Wakko and Phoebe sneak off to the supply closet for half an hour during the office party, we can make an educated guess what they’re probably doing in there.  Especially with the appropriate context around them sneaking off and how they sound/look/act when they come back.
So depending on the overall tone of my story, maybe I don’t actually need to write out my sex scene—I can just let my reader fill in the blanks themselves.  And again, like so many well-done subtle things, this can end up being much, much sexier than actually showing stuff.  As an artist friend of mine once pointed out, “nudity isn’t sexy.  It’s what you don’t see that gets you turned on.”
There is one small pitfall to doing things this way.  If I’m too subtle, people might not get what I’m implying.  Their assumptions may go much too far, not far enough, or maybe end up on that awkward balancing point where they try to figure out what just happened.  Or if anything happened.  I don’t want to knock my readers out of the story with a confusing “did they or didn’t they”—unless that was the whole point of my fade to black.
Second, if I’m definitely going to show my sex scene, I need to remember that sex is... well, action.  I don’t mean it needs to be wildly enthusiastic, just that this is a case of actual, physical things happening.  And any sort of action can get boring fast if it’s written poorly.
I'm a big believer that most action shouldn't take longer to read then it would take to happen, especially when we're in the moment.  A punch shouldn’t take three paragraphs to describe.  A car crash probably shouldn’t take two pages unless it’s some massive, seventeen-car pileup 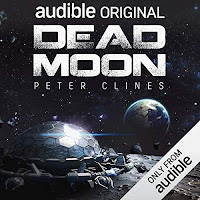 Hey, speaking of sexy things, I’ve got a new book out tomorrow, exclusively through Audible.  Have I mentioned that recently?  Dead Moon is a fun little zombie story set... well, you can guess where.  And it’s also set in the Threshold universe, so there may be some other things in there that appeal to a few of you.  Please check it out so I can keep buying cat food and rum.
Next time...
Well, okay, look.  I’m in the last few weeks of finishing up another Threshold book, so I don’t have a lot of time.  Truth is, I’m probably going to take the next week or two off to focus on that.  If you want to use this time to toss out a few suggestions for thing you’d like me to rant about, that’d be fantastic (thanks in advance).
And one way or another sometime very soon, I’ll be revisiting the whole outlining thing.
Until then, go write.
Happy Valentine’s Day.