I know, I know.  Asking-for-trouble title on this one.  Please just stick with me, though, okay?  There’s a good reason for it.
Which I shall explain with this shocking revelation and a quick story.
When I was in seventh grade, I found out I was color blind.  This may seem like a weird thing for someone to “discover,” but it makes sense if you think about it.  I’m daltonic (or deuteranomalous if you want to get super-specific), which means I can see most colors, but I have trouble with reds and greens.  I just kind of learned by filling in the blanks.

For example, leaves, Sleestaks, and the Hulk were green.  Grass is the same color as leaves, therefore grass is also green. The Lizard is the same color as the Hulk, therefore the Lizard is also green.  I just matched things up with what I learned from books and comics and Sesame Street.
In other words... I learned just like everyone else did.
Of course, it never occurred to me that what I was seeing might not be what everyone else was seeing. Why would it?  My vision was perfectly normal.  Nothing made this more clear than several determined childhood attempts to manifest either X-ray vision or optic blasts.
(and maybe teen attempts)
(...okay, last week)
Then one day I got to Science class and the teacher had a slide show set up.  It was a bunch of those pictures-hidden-in-colored-dots things (an Ishihara test, if you were so interested).  Like that one right down there.  And much to my surprise... I couldn’t see anything in them.  Almost two-thirds of them looked blank.  Just like that one down there.  I can’t see anything in it. No pictures or patterns or anything.  If you can, feel free to say something in the comments.

Anyway, I had a low-level, seventh grade freak-out about all the important stuff—Will I still be able to get a drivers license?  Will I have to get glasses?  What girl will ever want to kiss me knowing I’m color blind?!
Once that was done, I spent the next day or two re-examining my whole world.  What did Sleestaks really look like?  That “grass is always greener...” thing had always seemed stupid to me, but did it make sense to everyone else?
And that’s when it suddenly hit me.  How did everyone else see the world?  What was I missing out on?  I mean red, white, and blue Captain America looks really good to me, but how much of that was being told for most of my life that red, white, and blue were complementary?  How did everyone else see those red stripes?  I couldn’t imagine a “new” color that could fill that slot.  Would most people be horrified at what I saw?
I spent weeks pondering this.  What were other people seeing?  How were they experiencing the world?  If red was the color of anger... was their anger different than mine?  Their envy?  What would alternate-green envy be like?  I was honestly second-guessing everything (which, granted is what most of seventh grade is, but this was on top of the usual stuff).
Anyway...
Once or thrice here I’ve talked about empathy.  Really simply, it’s the ability to understand what other people are going through.  If your friend has a hangover, goes through a bad breakup, or saves a bundle on car insurance with Geico, these are all experiences we can relate to, and we can apply how we felt to guess how they’re feeling. 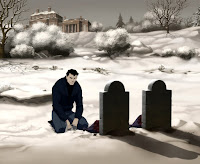 But really, empathy goes beyond that.  I still have both of my parents, so I didn’t know what it was like when one of my friends lost his.  But I could extrapolate from how I feel about my parents and from huge losses I have suffered.  Empathy’s being able to relate to people even when you haven’t directly experienced what they have.
I’ve never had that ice-water in your spine moment what I realized I’m sitting in an office with a serial killer. I’m guessing most of you reading this haven’t, either. But our job is, quite literally, to convince people we have.
Y’see, Timmy, I don’t think it’s exaggerating to say I can’t be a good writer if I don’t have empathy. If I can’t see the world through the eyes of different people—not how I think they see the world, mind you, but how they see it—I can’t have good characters.  And without good characters...
Well, you know.
Next week is... oh, holy crap, next week is San Diego ComicCon!  And I’m going to be there next Thursday, hosting a Writers Coffeehouse with Jonathan Maberry (he of Glimpse and V-Wars and the Joe Ledger books).  Plus I’ve got a couple of signings scattered through the day.  I’ll put up a schedule very soon.
And next week, for the rest of you...
Well, I’ll come up with something.
Until then, go write.