Can You Describe the Suspect?

So, a friend of mine gave me a book a while back...
Okay, gave might be the wrong word.  I think she got rid of the book and I happened to be the unlucky recipient, like a bottle imp or that sexually-transmitted monster in It Follows.  She needed it out of her life, I just happened to conveniently be there at the right time. It was nothing personal.
Anyway...
The first page of the book was nothing but exposition about the main character’s backstory. Exquisite, laboriously crafted, meticulous exposition.  Where she grew up. How she grew up. Facts about her mother, father, and brother.
Page two was her life as a child, a teen, and a blossoming adult.  Favorite toys, sports, and fashions.  Random crushes. Assorted adventures.

Page three was the college years.  Classes she liked and didn’t. Boys she liked and didn’t.  Women she liked and didn’t.  Intellectual growth, sexual discovery, more fashion, and a tiny bit of body modification which would lead to arguments with her parents.
Page four was after college. The new job. New fashions.  Being an amateur athlete. Competing in the office and out on the street. Getting better. Moving up the ladder, seeing big things in her future at the job and the sport.
Page five was the accident. The long, drawn out accident.  Gruesome details of it as it happened.  More gruesome details as doctors took drastic action to prevent further damage.  Some of this spilled onto page six.
Most of six and seven were recovery. Coming to terms with her new life.  Depression. Self loathing.  Breaking up with Chris.  Purging everything that reminded her of who and what she used to be. Getting rid of so many favorite clothes and shoes.  Won’t be needing shoes anymore. More sulking and self loathing.
On page eight— we introduced the next character.
By sheer coincidence, page eight is also where I stopped reading.
Seven pages of long, rambling sentences showing off an impressive vocabulary, but all of it telling the story, not one line of it showing anything.  Nothing actually happened, I just got told a bunch of stuff that had happened in the past.  There wasn’t even any dialogue in all of that.  None.  After all the clothes talk, I could probably tell you how many days the main character’s bra and underwear matched, but I didn’t have the slightest clue what kind of voice she had.  Or anyone around her.
Hell, you probably started skimming all that, right?  And that was just me describing what the book was describing.
A common problem for all writers is when description gets too excessive.  I get caught up in giving all the details and nuances of this person I fleshed out in my character sketch.  Or mentioning every detail of that period furniture and firearms I spent three days researching.  Or maybe just taking all those little things I noticed on my hike through the woods and putting every one of them down on the page.
And at some point, while I’m pouring all this magnificent stuff out, I lose track of the fact that somebody’s going to have to read all this.  And since most readers are more interested in the plot and story--the active elements of my writing—odds are they’re going to start skimming after the fourth or fifth flowery description they’ve come to realize has no bearing on the story. 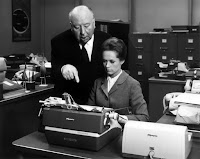 So, maybe I should question why I’m including stuff my readers are just going to gloss over. Most semi-decent storytellers would.  Alfred Hitchcock once said that drama is life with all the dull bits cut out.  Elmore Leonard said he leaves out all the parts people would skip anyway.
Excessive description that serves no purpose... serves no purpose.  That’s all there is to it.  And, no, “art” isn’t a purpose.  If I’m going to spend seven pages describing Phoebe’s wardrobe through the first twenty-six years of her life, everything that happens in the rest of the book better hinge on those clothing choices.
(Bonus tip--this kind of overwriting is deadly in scripts.  By its very nature, screenwriting is a very concise, minimal form of storytelling.  A sure way to get rejected from a contest is to put in piles of description that just shouldn’t be there.)
Now, I’d like to mention another issue with massive over-description.  We all tend to form our own mental pictures of people and objects in stories.  My lovely lady and I were chatting once about Jack Reacher, the Lee Child character, and realized we both had very different ideas about what he looked like.  I get notes from people all the time about how this cover got Stealth wrong or Cerberus doesn’t look like that.
That’s part of the joy of books.  We can all have our own image of characters like Stealth or James Stark or Kincaid Strange or Sinjir Rath Velus.  In that little movie theater inside our skulls, they have a certain look and sound that’s special just to us.  And nothing’s more distracting than to be constantly reminded of all the many details that don’t match up with that mental picture we’ve already formed.
Okay, one last thing...
There’s a flipside to description, and that’s when I never actually describe anything.  Sometimes this is an attempt to invoke mystery or suspense.  Other times it’s a way to evoke an emotional response with a clever metaphor or simile (when the knife sinks into your gut and it’s like every painful sensation in your life got balled up, hammered flat, and pushed up under your ribs).
And sometimes... well, sometimes it’s just a cheat.  I can try to avoid the monster for as long as possible, which helps build suspense and dread, but eventually I need to say what it is.  It’s not uncommon for a writer to try to find a way around an actual description at this point.  After all, I’ve been talking about how fantastic the Hypotheticoid is for three-quarters of the manuscript now, and my description of it may not live up to all that hype.
But I still need to describe it.
So, here’s an easy tip.  It’s so easy I bet half of you will shake your head and ignore it.  And some of you are probably already doing this without thinking about it.

If I’m going to describe something... I need a reason to describe it.  That’s all. I need a reason for the level of detail I’m using.  The cashier at WalMart and a medical examiner can both see a bullet hole in a person’s head, but they’re both going to view it very differently.  And if it takes me three paragraphs to explain what the cashier sees, what am I going to need for the medical examiner?
If I’m going to describe a character, I should have a reason for doing it.  I can’t describe the last police officer I dealt with, but I can give a lot of details about the last few people I went out to dinner with.  I’m betting nobody here can list everyone they crossed paths with the last time they were in a grocery store.  Oh, one or two might stand out, but let’s face it... there were probably dozens of people there.
And they just weren’t important in the long run.
Y’see, Timmy, if I waste my descriptions on the little things, they won’t have any weight when I get to the big things.  Because by then my readers will already be conditioned to skim my descriptions because they don’t matter.  And once readers are just skimming...
Well, then I’ve got nothing.
Now go write.