Those Are All Made-Up Words!

I wanted to jump back to something I mentioned a few weeks ago. Creating my own words for stories. Yes, all words are made-up-- don’t be the clopos in the room, okay? I recently got a new laptop and as I was bringing everything over I stumbled across a very old blog post about using made-up words. It had a few nice rules of thumb for separating good uses from bad uses, and I thought it might be worth revisiting them.
So let’s dive right in.

First off, let’s talk about names. Proper names for people, places or things. This may sound kind of simple, but I’ve seen it go wrong enough that I think it’s a good place to start off.
When we’re worldbuilding an alien or fantasy world, or sometimes one in the distant past or future, there’s an urge to hand out a lot of different names. For characters, towns, deities, what have you. On the surface, there’s nothing really wrong with this, but I should think a bit about how I’m going to introduce these names. Especially if I’m going to do it in dialogue or a first person POV.

Let me give you a few quick, example sentences.

“Tim, it’s good to see you.”
“We’re going to try for another child, if Phoebe’s willing.”
“Sarah, what are you doing here?”

Pretty straight-forward, yes? No confusion about what any of these sentences mean. Heck, the second one even slips in some personal information about the speaker. But watch what happens when I switch the names like this?

“Jesus, it's good to see you”
“We’re going to try for another child, if God’s willing.”
“Christ, what are you doing here?”

See? Now these these sentences are conveying different information. They’ve shifted to expletives and figures of speech. But we only know that because we recognize this second set of names. Because watch what happens when we don’t have reference for any of these names...

“Tokar, what are you doing here?”
“We’re going to try for another child, if Ostriax is willing.”
“Grothnixian, it’s good to see you.” 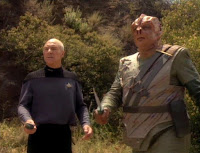 Soooooo.... now what are these sentences saying? We can’t really parse them without a frame of reference for those names. Is Ostariax the speaker’s wife, husband, or chosen deity? Heck, Tokar and Grothnixian might not even be names at all. Maybe they’re swears I made up and they’re just capitalized because they start the sentence. I mean, it’s clear to me, the writer, so I guess if you don’t understand it in context the problem’s just you...

The problem here is that when a reader stumbles across this, their brain’s going to make a decision and stick with it. It’s going to say Grothnaxian is a proper name, Ostariax is a god, and Tokar is one of those words you might use with your close friends, but not in polite company. You definitely wouldn’t use it on the internet where it might come back to haunt you years from now.

And when, fifteen or twenty pages later, my reader realizes Ostariax is actually someone’s sister... It’s going to break the flow. Like, shatter it. My reader’s going to stop and re-read those last ten pages to see how many things they misunderstood, or if some things make more sense now. And they’re going to double check Tokar to make sure they aren’t misunderstanding that name, too. Heck, odds are pretty good they’re going to be cautious moving forward, because I’ve shown I can’t really be trusted to be clear about this. All the names are suspect now.

As I said above, I need to be very careful about how I first introduce these.

Also, as a quick aside, something to consider for distant past/future names. Truth is, they’re probably not going to be that different. I mean, how many Biblical names are still in common use today? Matthew, John, Mary, Joseph, Luke, Thomas (and let's not forget Peter). Odds are you even run into some of the Old Testament ones on a regular basis—David, Abigail, Joshua, Leah-- heck, Adam and Eve. Regardless of your religious beliefs, it’s clear these names have been around historically for thousands of years. It’s not hard to believe a lot of our present names will go that far into the future. I mean, does anyone even think twice about it when names from today show up in the hundreds-of-years-from-now world of Star Trek? Christopher, Michael, James, Will, Beverly, Ben, Miles, Katherine, Tom, Harry...

You get my point. Do I really need to create “ancient” or “futuristic” names? Probably not.

As for making up words for regular things—calling eyeglasses optykwear or motorcycles bipulsors or a breastplate torsarmor—maybe I should stop for a moment and consider why I’m renaming them. Am I doing it because it actually matters to the story or plot somehow? Or is this a cheap, quick attempt at worldbuilding? Just hitting something with a coat of literary paint to try to make it look shiny and new?

Here’s one of those easy rules-of-thumb I mentioned up top. Try to sum up your whole story in about two pages. You don’t actually need to write it all out, but try to at least have the whole thing organized in your head so you could jot it down or explain all of it to me in under five minutes. This is the long-ish elevator pitch.

Okay, if at any point find myself simplifying some of my terms for this summary—just talking about my character’s glasses or her motorcycle or the breastplate that saves her life—then this is the term I should probably be using in my story. Why force the reader to remember an awkward name for something common? Let’s just call a sword a sword and be done with it. We’ve got better things for our readers to spend their time on, right?

Y’see, Timmy, I don’t want to overcomplicate my story with details that are just going to slow it down and drive readers away. If I don’t need to make up a name or a term... then why would I? It’s better just to keep it simple and let them enjoy the read without me getting in the way.

Speaking of getting in the way, this is the point where I awkwardly insert a reminder that my latest book just came out this week. The Broken Room is an action/thriller/sci-fi/horror story with a lot of heart. No, really. One blurb called it “a cosmic horror John Wick” which I was kind of fond of. You can pick it up at your friendly local bookstore, and probably in any format you could want. Fair warning—it does sound like there may have been some supply chain issues this week, so try to be patient with folk if they can’t put something in your hands right this second.

On which note, I did a signing with Mysterious Galaxy last night and scribbled in their extra copies. You could give them a call and they could ship you one. And this Saturday, for you LA-area folks, I’m going to be at Dark Delicacies in Burbank, scribbling in even more books. If you’d like one personalized, please swing by. Or give them a call ahead of time.

And speaking of time... next time, I’d like to talk about framing things.