Pop culture reference.  Long overdue, and to bring even more shame on my household, it’s kind of a repeat.  Sorry.
Before I dive into things, I must shamefully point out that the latest book in my Ex-Heroes series got released this week.  The marketing folks are lovely people, but they’ll be upset if I don’t mention it.  Ex-Isle is book #5 and it’s now on sale everywhere.  Check it out.
And now, back to this week’s rant...
This is something I’ve been meaning to talk about again for a while now.  As I mentioned, I’m kind of in a rush this week (even more on that below), so I thought this would be a good time to add in what’s more-or-less a repeat post.  At least, it is if you’ve been here since 2008...
That being said, let’s talk about “Darmok.” 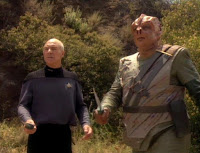 “Darmok” was one of the first episodes of Star Trek:The Next Generation‘s fifth season.   The Enterprise visits an alien race, the Children of Tama, which has repeatedly brought first contact attempts to a grinding halt because the universal translator can’t make sense of their language.  The Tama language can be rendered in Federation English, yes, but the words and sentence structure make no sense.  Sensing the problem that needs to be overcome, Dathon--the Tama commander—kidnaps Captain Picard to a hostile world where the two must fight together to survive.  Through their trials together, Picard comes to realize that the Tama language is not based on ideas and concepts, but on stories and metaphors.  They wouldn’t say “I’m happy,” they’d say something like “Scrooge, on Christmas morning.”  They don’t say they’re relieved to see you, they’d say “Indy, finding Marion in the tent.”  It’s been impossible to translate the Tama language literally because the Federation doesn’t share their history and folklore.
In a way, all of us do this every day. We reference movies, TV shows, pop culture events, and then we stack and combine them. Heck, that’s pretty much what memes are.

We also do it on a smaller scale, though.  All of us have jokes that are only understood by our family or certain circles of friends or coworkers.  Some folks crack jokes from Playboy, others from Welcome to Night Vale.  These folks obsess over Scandal and these folks watch iZombie whenever they happen to catch it.  Some people like sports, others like science.  And all of us talk about what we know and what we like.
I worked on a set once where people commonly asked “Where’s Waldo?”  A lot of my college friends understood when you talked about Virpi Zuckk, the third Pete, and nice shoes.  Some of my best friends and I make frequent references to Pod Six,  killing Jeff, and “the girl’s evil cheater magic.”
Heck, even this title is an in-joke.  It’s a reference to one of the first Adult Swim cartoons, Sealab 2021. But also, when two of my friends bought a house and decided to use their sunroom as a dedicated gaming room, we all sort of universally decided to call it Pod Six.  Because it’s where we all hang out and talk in weird references that only we’re going to understand.
See where I’m going with this?
A common problem I see again and again in stories is oblique references and figures of speech that the reader can’t understand.  It might make sense within the writer’s personal circle or clique, but outside readers end up scratching their heads.  Several of the writers responsible for this sort of mistake will try to justify their words in a number of ways...
First is that my friends are real people.  Therefore, people really talk this way, and there’s nothing wrong with it.  Alas, as I’ve mentioned here many times before, “real” rarely translates to “good.”  Pointing to a few of my like-minded friends and saying “well, they got it,” isn’t going to win me points with an editor.

Second is that I’ll argue common knowledge.  I’ll try to say this material is generally known-- universally known, even-- and it’s the reader who is in the feeble minority by not being aware of it.  This is probably the hardest to contradict, because if somebody honestly believes that everyone should know who the U.S. Secretary of State was in 1969, there’s not much you or I can do to convince them otherwise.  It’s much more likely, in the writer’s mind, that the readers are just uneducated simpletons who never learned the ten forms of Arabic verbs, don’t collect Magic cards, and couldn’t tell you the obvious differences between Iron Man and War Machine if their lives depended on it.
Third, usually reserved for screenplays, is the auteur excuse.  I plan on directing this script, so it doesn’t matter if no one else can understand the writing (or if there are tons of inappropriate camera angles, staging instructions, and notes for actors).  The flaw here is that my screenplay will invariably end up getting shown to someone else.   A contest reader.  A producer.  An investor.  Someone out of that inner circle of friends who needs to look at my script and understand the writing.
Y’see, Timmy, I can’t be writing just for my five closest friends.  Not if I want to succeed as a writer.  I’m not saying my writing has to appeal to everyone and be understood by everyone, but it can’t be so loaded with in-jokes and obscure references that nobody knows what I’m talking about.
This is one of those inherent writer skills.  Something I just need to figure out how to do on my own, mostly by reading everything I can get your hands on.  I need to know words and phrases.  I have to know them and I have to be honestly aware of who else knows them.  Using extremely uncommon terms or words may show off my bachelor’s degree and vocabulary, but the moment a reader has to stop and think about what a word or phrase means, they’ve been taken out of my story.
And knocking people out of my story is one of the certain ways to make sure the reader puts my manuscript down and goes off to fold laundry.
On an unrelated note... if you’re in San Diego and happen to be reading this just as it went up, I’m going to be at Mysterious Galaxy tonight (Thursday) talking and signing copies of Ex-Isle.  And on Saturday I’ll be at Dark Delicacies in Burbank doing more of the same.  Hope to see some of you there (and if not, you can call them and order books, too).
Next time, I’d like to talk about how ignorant some of your characters are.
Until then... go write.