I wanted to blather on about names a bit, because I read something a few weeks back that kinda went overboard with them. It’s a recurring issue, I think. Pretty sure I’ve talked about this before.

There was a school of thought a while back that every character should have a name. Every single character in my manuscript needs a proper, given name. I read through and I know the given name of the cabbie, the intern, the homeless guy at the freeway exit, the woman  ahead of the main character in line at Starbucks, the barista at Starbucks.  It doesn’t matter how important—or unimportant—they are to the story  They get a name.

I don’t know if this was something somebody was “teaching” somewhere or if it was just telephone-game advice run amok and gaining life and sentience and trying to conquer the internet. I saw this “rule” show up often on general writing forums and a on screenwriting boards. Essentially, it makes things more real. Gives every character a little more dimension and life.

Thing is... this isn’t a rule. It’s just awful advice. I should never do this. Seriously. 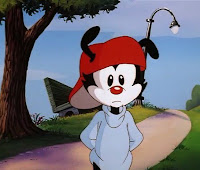 Names are a form of shorthand—in real life and in fiction. It’s a quick label we slap on that collection of motivations, dialogue quirks, and physical descriptions we call the social-web-intersections that are Wakko. But like any sort of shorthand or label, too many can get confusing. Two or three post-it notes around my computer can be helpful. Two or three hundred probably means I can’t see the screen and anything I need to remember is lost in the chaos.

That’s the other way names are shorthand. They let us know which characters are important. Yes, everyone’s important and special in real life, but within my story—within this fictional universe where I am a wise and powerful God who controls everything—are they really that important? Does some aspect of the story rely on my readers seeing them and noticing them and remembering them?

My personal rule is this--a character’s name in my manuscript should be what my main characters refer to them by.  If my main character doesn’t know their name, has no reason to, and never will... it’s a safe bet my readers don’t need to know it.  If they’re just “the cute barista” then odds are pretty good we, the readers, don’t need to keep all those quirks and descriptions in mind. We can devote that mental space to other things.

Lemme give you an example. A little indie arthouse film came out this summer called Avengers: Endgame. Not a lot of people saw it. On the off chance you were considering it sometime in the future, I’ll warn you that I’m going to drop a few spoilers in the next paragraph or three. Well, the same spoiler spread out across them. One point, discussed to some degree.

You may want to skip ahead, that’s what I’m getting at. Everyone else...

There are a lot of people in the final scenes of Endgame. Hundreds, maybe even thousands. That big battle? I mean, pretty much every superhero we’ve ever met. A bunch of sorcerers. Several tons of Asgardians (seriously, think of the bone density those people must have). And that’s just on our side. The big bad has two or three different alien armies, plus his little inner circle of specialists

So... what were their names?

I mean, sure there’s Cap and Tony, Thor and Hulk. Valkyrie, Captain Marvel, T’Challa, Shuri, Ant/Giant-Man, Wasp, Winter Soldier, and yeah, okay, there’s a bunch of them.  Plus all of Thanos’s people.  Proxima Midnight and Ebony Maw and....Urban Sprawl, I think, was the big guy? We never really got properly introduced to them, did we?

But what about everyone else? Can you name all the sorcerers who open portals? Any of the Asgardians who come through? That big space worm thing that Giant-Man slams into the ground? Surely they call it something, right?

Thing is, we don’t know. And we don’t need to know. Cap probably doesn’t know most of them past “more folks on our side” and "all of those things with Thanos."

Hell, can you imagine if every one of those characters got a close up and a quick chance to introduce themselves? Seriously, how long would that take? How many would we actually remember? It’d be like speed-dating, except you’d know from the start a lot of them were going to die. Okay, so it’s a lot like speed dating. You get the point.

How about a non-spoilery version. I’m betting most of us here have worked some kind of basic retail/food service job at some point in our lives. Something where we had to deal with customers. I did both.  That said, how many of those customers can we name? Or if somehow this doesn’t apply, we’ve all been to a store or restaurant. Probably in the past two weeks. How many of the clerks or cashiers can you name? How many of the other customers?

And the reason we can’t name any of these people (Asgardians to waitstaff) is because they weren’t important to our personal story.  They weren’t relevant to the main plot (which was our lives, naturally). In the end, if my main character doesn’t know who someone is, there’s nothing wrong with just calling them the second mechanic or the doctor in the lab coat or even just the cute barista.

This isn’t to say we (or our characters) will never, ever come across someone who stands out but ultimately has no real effect on our story. Someone with an interesting name or appearance that elevates them a bit above the crowd. But those folks are the few and far between. They’re the exception, not the rule.

Y’see, Timmy, giving every character a name may feel like it’s showing how well-thought-out my world is, but in the long run it just breaks up the flow of my story.  It’s making my readers juggle pages and pages of potential characters instead of letting them focus on the ones that are actually going to be important.

Next time... we’re all going to get our revenge. Finally. It’s going to be glorious!