I’m relatively new to Twitter.  I mean, I’ve been there a couple years now, but there are some early-adopters who’ve been there for ten years or more.  I remember a while back when Ernie Cline finally got verified, and he noted that he’d been on Twitter longer than the Twitter verified account...
Anyway, I follow a lot of writers, and most of them (and me, too) tend to toss out storytelling advice of one kind or another.  As best you can in 140 characters, anyway.  Sometimes it’s threads, random encouragements, simple reminders—there’s all sorts of stuff.
Of course, like any statement made on Twitter, this advice is often followed by a response like “Well, actually...”  You’ve probably seen it applied to a lot of things beyond just writing advice
In simple terms, this kind of response is people pointing to an exception to the rule in an attempt to disprove the rule.  And a lot of the time, they’re doing this to justify their own opinions and behaviors.  I don’t like statement X, or what it implies, so I’ll find one or two examples where X isn’t true and use it as proof that X is never true.
Here’s the thing about approaching writing—or anything in life—with that kind of mindset. 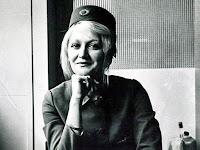 Vesna Vulovic.
For those of you who came in late, Vesna was a flight attendant back in the early ‘70s.  I’ve mentioned her here once or thrice before, and a few times at the Coffeehouse.  Y’see, her DC-9 was bombed in mid-air back in 1972.  She was trapped inside the plane’s hull as it plunged six miles to the ground.
However...
Somehow, through a near miraculous series of events and conditions, Vesna survived.  She fell 33,000 feet, was in the hospital for a couple of months afterwards, and left under her own power.  No wheelchairs.  No artificial limbs. No iron plates in the skull.  She was fine.  They did a whole Mythbusters episode about her fall.
Vesna lived a very full, rich life for another forty-four years, just passing on back in December.  She ended up working as a political activist for most of her life. And she still holds the Guinness Record for an uncontrolled fall.
So... this means one of my characters can fall six miles and live, right?  It really happened, so it must be believable.  Heck, I could probably say they fell a mile without even needing hospital time.
Let’s be clear on one thing—there are always exceptions to the rule.  Always.  Anyone who tells you that something is 100%, never-question-it always wrong--especially in art--can be ignored.  Especially if they shriek “no exceptions!!”
Here’s the catch. Exceptions to the rule are very rare.  Exceptionally rare, you could say.  That’s why they’re the exception to the rule and not the rule.
For example, maybe I can point to a dozen people who sold the first draft of the first novel they wrote.  But I can also point to the tens of millions of people—actual, literal millions—whose first draft submissions were rejected.
Yeah, there’s a double handful of authors who sold manuscript full-to-the-brim with horrible spelling and bad grammar and not the slightest clue about formatting.  There are hundreds of phone books full of people, though, whose manuscripts were tossed out almost immediately because of these same issues.
And sure, we can point at a dozen or so people who got their first book sold because they knew the right people or were related to the right people or were sleeping with the right people. But there are also the hundreds of thousands, probably (again) millions of writers who broke in by taking their time and writing really good books.
The downside of this is... well, none of us want to be in the majority, right? Nobody likes the thought of eventually breaking in, we want all the success and recognition now!  We want to be the exception!
And, yeah, some folks have gambled everything on being the exception. That’s their entire business plan. I don’t want to take the time or do the work or try improving myself and my skills.  So I’ll latch onto anything that says I don’t have to, anything that proves the advice from that experienced pro is wrong.

Okay. Fine. Just ask yourself one question...
D’you want to go skydiving without a parachute?
I’m willing to bet a fairly large-denomination bill that right now someone is itching to write a “well, actually...” down below that will explain how this isn’t the same thing.  Or that you can go skydiving without a chute. Or that there are two or three schools of thought that Ms. Vulovic maybe didn’t fall quite as far as all the reports said.  It’s just human nature. Some people need to argue the way you and I need to breathe.
Even if it amounts to arguing against parachutes when you go skydiving.
When professional writers offer advice, they’re handing out parachutes.
So, here’s my bit of advice for you, and it’s one I hope you’ve seen underlying most of the stuff I’ve said here since the first post you may have read.
Y’see, Timmy, the best thing I can do is assume I’m not the exception to the rule.  No matter how clever, how witty, how perfect my writing is, I should not consider myself to be the one person who gets to ignore all the established standards.  The absolute worst thing I can do is scoff at the rules and think they don’t apply to me.  No matter how vastly superior my work is, I should always assume I’m working under the same conditions as everyone else.
The reason I should assume this is because the person reading my work is going to assume it.  That’s what I’m fighting against when I plan on being the exception to the rule.  My audience—whether it’s an editor, and agent, or just someone reading my story for free on their Kindle or on Wattpad.  All these folks have seen attempts to break the rules again and again and again, and the overwhelming majority of these attempts have been simply awful.
Remember—exceptions are rare.  Very rare.  The vast majority of would-be writers who break the rules do it for the wrong reasons and in the wrong ways.  So when I veer away from the rules, most everyone is just going to go with the numbers and assume my work is simply awful, too.

Does that mean all these things won’t happen or can’t be done?  Not at all.  My writing may be so utterly, mind-bogglingly spectacular the reader will forgive and forget those atrociously dull opening pages.  The structure could be so rock-hard that no one notices the abundant typos.  It’s even possible my idea is so fiendishly, unbelievably clever that nobody will pick up on the fact that every single character is carbon-copied from Game of Thrones   Yeah, even my dwarf, my teenage assassin, and my Princess of Wyverns.
A nice, simple rule of thumb.  If at any single point I find myself questioning if something matters—I should assume it does.  Does my main character need to be developed more than this paragraph?  Will a reader care that I misspelled forty or fifty words?  Do I need to make that part of the story clearer?  Should I bother to look up the exact format rules for this?
My default answer for all of these questions needs to be yes.
Again, I shouldn’t be scared to do something new, because if I break the rules—break them well, mind you—I’ll get noticed and rewarded for it.
Just remember a lot of people break the rules because they don’t know what they’re doing... and I don’t want to get lumped in with them.
Next week—okay, I have to be honest.  The next few weeks are going to be rough for me, from a blogging point of view.  One week from tonight I’m going to be down in San Diego at Mysterious Galaxy, talking with Daniel Price about his new book The Song of the Orphans. If you’re in the area, stop by and hang out with us.
And then the week after that I’ll be back in San Diego for SDCC. I’m doing at least one panel, possibly two (but I haven’t heard back on that one, soooooo...), and I think there may be a signing or two and some cool Paradox Bound swag we’re giving away...
So we’ll see what happens next week.  As always, please feel free to make requests below.
Until then, go write.