Getting Paid To Do It

A funny title, yeah, but I freely admit I’m kinda lifting it from a somewhat-similarly themed book by Peter Lefcourt and Laura J Shapiro.

Look, nobody likes talking about this sort of stuff. It makes us all feel a bit uneasy, because our Puritan ancestors beat this sort of thing into us so hard we’re all still feeling it 400 years later. “Money is the root of all evil! Hard work is its own reward! Money won’t buy you happiness!” I’ll be honest—I’m aware of all of this, this kinda societal indoctrination—and I’m still feeling kinda weird sitting here writing about it.

A lot of folks are talking about this right now and I think that’s good. Different facets of this topic keep coming up to the surface every few months it seems, and a few versions have been bouncing around the internet just the past week or two. It’s like the little dodecahedron inside a Magic 8-Ball, and every time we swirl it a new face pops up in the window and says something along the lines of IF YOU WERE A REAL ARTIST THE MONEY WOULDN’T MATTER 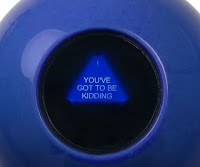 So let’s toss the Magic 8-Ball aside for now (you know we’re just going to pick it up again—they’re always so tempting) and try to have an honest talk about art and money. Because there’s a number of folks on both sides of the artist/audience line that have kinda... skewed views on, well, doing it for money.

One thing we don’t talk about is the fact that a lot of the art that gets created is inevitably shaped by financial factors. I know a ton of artists. Comic artists, painters, sculptors, actors, singers, and yeah a ton of writers of all types.  Fiction writers of pretty much any genre you can think of, screenwriters, playwrights... I’m even really good friends with a published poet.

A truly stunning thing these folks all have in common is that they’re real people. Just like the people you see on the street and work with. Artists have all sorts of bills to pay. Rents and mortgages. Utilities. Credit cards. Car repairs. Groceries. Medical bills (with and without coverage). A fair number of them have kids! I don’t, but I’m guessing  kids cost at least as much as cats, money-wise, so... wow.  So, like everybody else, artists have to make some of our decisions based on how much is in the bank.

Now, to be very clear right up front, I’m not saying any of my friends or acquaintances don’t care about art. These people love what they do, they care how things turn out, they want the things they create to be amazing.  And they turn out some amazing stuff and they (deservedly) make money off it.

Which is something a lot of people don’t get. This isn’t a binary thing. I can care about the art AND think about the money. Cause the truth is, if I’m going to do this—especially as any sort of job or career—money’s going to be a factor in my decision making process. It’s unavoidable. We can talk about the muse all you want, but at the end of the day, artists have to pay the bills just like everybody else.

There’s a Richard Matheson quote many of you have heard me mangle at some point or another-- “Writing is art,  publishing is the business of selling as many copies of that art as possible.”  The minute I’m dealing with publishing—traditional publishing, self publishing, hybrid, small press, whatever—I’m talking about business. and business means money is changing hands and certain expectations need to be met.

Money’s a huge factor in self publishing because... well, I’m the publisher. That’s the money side of the equation. Copyedits, layouts, cover art, marketing—it all costs money if I want it done right.  And if this is about the art, I want to do it right, don’t I? Which means I’m probably starting my self-publishing venture at a loss.

Even when things are going great in traditional publishing, money’s a factor.  I’ve gone to an editor with three or four things I’d like to write and they’ve said “Well... we’ll pay you X for this one, or 5X for that one.” I ask you, kind reader, if you had the choice between a six month job that pays you $10/hour or a six month job that pays $50/hour, and they’re both jobs you’re interested in... which one are you going to pick?

I know which one I picked when I got stuck with that choice. This is my job. This is how I earn money for all those bills and expenses. So I made a choice and I got to write a story I really wanted to write and get paid for it. And the other one... I didn’t write.

”But isn’t that what Kickstarters and Patreon are for? So you can just make any art you want?” says random internet user twenty two, cleverly countering me.

Well... sort of.  I don’t have a Patreon, but, I feel reasonably sure if I started one I could get a couple folks backing me for a buck or two. People who want to see me write more books and stories they like in the genres they like.

Which is kinda the catch. These folks would be sponsoring me because they want to see more of this weird cross-genre stuff I write. I back maybe a dozen people on Patreon, and I can honestly say that there isn’t one of them where I said “the past is irrelevant—I want to see what completely different thing they do next!”  I’m not against them doing new things, but the simple truth is I sponsored all of them because I liked their work and thought “I hope they’ll keep doing this.” I bet most of you are the same way with anyone you back.  If I thanked my hypothetical patrons tomorrow and announced that now I can finally write the Mediterranean romance trilogy I’ve always dreamed of... well, I wouldn’t be too shocked if that patron count dropped a bit over the next month  or so.  Sure, some folks would stay, absolutely. But most of them... they’re understandably going to move on and find something they like.

Same with a Kickstarter—it’s for one specific thing. If I tell you I’m doing a Kickstarter for X, I can’t change my mind and deliver Y. So it’s soooort of artistic freedom.  I can try something and hope people want to back it.  But I’m not really deciding what I get to do. I’m throwing options out there and letting other people choose for me.

And, to be very clear—I’m NOT saying Kickstarter or Patreon are bad things. They’re fantastic things. They let a lot of artists do a lot of work they otherwise wouldn’t get to. But using them doesn’t mean these artists are suddenly free of any and all financial constraints on their art.

There are costs to making art.  Always are, always have been.  And a lot of artists never recoup those costs. And waaaayy too many people think they shouldn’t. Think they’re bad artists for even wanting to make money. Or asking for money. Where the hell do I get off, hoping for some sort of compensation for that thing I spent six months of my life working on?

”Well, I don’t mind suffering a bit for my art and giving up a few hours of sleep!” says random internet user number seventeen. That’s cool. You do you. But the simple truth is, if that’s my path it’s eventually going to affect my health, which will mean medical expenses, which brings us back to... money. And probably time, too. Which means it cuts into the art.

And let’s have a moment of frank honesty. There are some folks who loudly insist “the money doesn’t matter” because... well, they’re not making any money. So this becomes kind of a well-padded moral armor for them. “I haven’t failed or been rejected— I just care more about the ART than about your filthy lucre.”

Look, the point I’m trying to make is... don’t be any of these people.  Don’t berate artists for wanting to make a living. Don’t mock them for having financial concerns. Don’t come up with elaborate justifications not to pay them for their work (83% of which always seem to be some twisted logic to justify piracy).

If I'm an artist... I shouldn't be ashamed that I took a job because I needed the money. Or because it just paid more. It doesn't make me any less of an artist.  Artists all through history took paid gigs and commissions to put food on the table, and they still did some of their best work with them. Likewise, I shouldn't feel bad about walking away from a job because, one way or another, I couldn't afford to do it (financially or time-wise). Yeah, even if it's something I may have really wanted to do. We've all had to pass on fun projects because, in the end, they were going to hurt way more than help.

And being an artist shouldn't mean hurting myself.

Next time... well, we talked about getting paid to do it. So I guess next time we should address if you’re getting it or not.