Just want to thank you all for your patience while I was off at (and recovering from) SDCC.
Now, back to our usual rants about storytelling...
I’ve mentioned once or thrice before that I like watching (and commenting on) bad movies.  Sometimes I find a hidden gem.  Most of the time, though, they’re just fodder for these little rants. Much like when I used to read scripts for screenplay contests, if I watch three or four bad movies in a row I almost always find some common flaws and teachable moments.
So I saw a Dracula movie recently...
He’s arguably the most commonly-filmed fictional character on Earth.  It’s not that big a surprise I stumbled across one.  Actually, it was a three-Dracula geekery day, if memory serves.
Anyway, this one was set back in the 16th Century and went the ancient-noble-prince route.  It’s a not-uncommon take on the character (Fred Saberhagen wrote a whole series that used it). Dracula used his supernatural powers to protect Transylvania and had this whole warrior code and all that.  And I’m kind of guessing 16th century.  Vlad Tepes lived in the 15th, but these people were actually dressed in a more medieval-fantasy style.

Except... we also had Jonathan Harker and Mina and Lucy and Van Helsing.  Medieval versions of all of them.  Again, not terribly uncommon.  We’ve seen lots of interpretations of these characters (looking at you, Hugh Jackman).  So Mina and Lucy being kickass demonhunters isn’t that odd.

Except... we also had this huge biblical subplot, where vampires are all descended from Cain and can only be truly killed by descendants of Abel.  Which, I mean, I’ve heard stories that tied vampires to the bible before.  So it wasn’t really an outlandish, crazy thing.
Except... we also had the romance.  You know the one.  Mina is a near double/reincarnation of Dracula’s long-dead princess.  Long scenes of wistful staring and passionate confusion ensue.
Man, that’s kind of a lot for a ninety-odd minute movie, isn’t it?
I think one or two Saturday geekeries later I ended up watching this twisty-turvy thing about dead children and stalkers and swapped identities and second marriages with creepy undertones.  That could all balance out kinda cool, right?  But there was also this whole parallel plot about guardian angels and angel sex (no, seriously) and sin and redemption.  And the plots didn’t so much as dovetail together as butt heads for a while and then have a high-speed impact (which also involved some fatalities...)
What’s my point here?  Well, I have two, believe it or not.  They’re kinda related, but still—bonus tips for you.
First, in both of these movies, the plot kept getting in its own way.  There were so many clever ideas that none of them really got developed to a satisfying degree.  We’d start dealing with one and then have to rush off to deal with another one before people forgot about it.  Or the ideas would collide head on, which led to analyzing the story instead of... y’know, enjoying it. 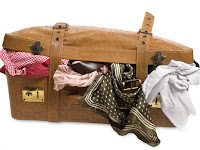 I’ve talked about this problem a few times before—where a plot or story is just overpacked with ideas.  And what tends to happen is the plot will overwhelm the story, the story will smother the plot, or sometimes they’ll just collapse into this mess of well... random plot and story points.
This is a really tough idea for new writers to grasp, because it feels counterintuitive to everything we’ve been led to believe as storytellers. If the idea’s good, how can it be wrong for a story?  Thing is, sometimes a really good idea just doesn’t work in the story I’m telling.  If it’s not driving the plot or motivating the characters, if it’s pulling us too far off course or just filling space that could be used for something else... it probably doesn’t belong there.
I got to interview Kevin Smith a few years back, and we talked for a few minutes about his legendary hatred of ad-libs. He was quick to point out that he didn’t hate ad-libs. His problem was that ad-libs rarely fit into the final story. Sure, they might be hysterically funny at the moment while filming on set, but then you’d get to the editing room. Now they had to fit in with the tone and pacing of the overall movie.  And more often than not... they didn’t.  It’s not that they weren’t funny or clever, they just didn’t fit. And then Smith even made a point of praising his then-leading man, Seth Rogen, for the ability to fire off lots of funny lines that were, as he put it “very germane to the discussion.”
Y’see, Timmy, when we come up with these really cool ideas for a new take on werewolves, some really hot and sexy dialogue, or an incredibly cool way to describe the feeling of a knife piercing the flesh... well, we want to use them.  That’s our job, after all.  To take cool ideas and make cool stories out of them.  But sometimes—a lot of the time—our job is really knowing when to take the cool ideas out.  It’s being able to cut away the excess, to figure out what our story’s about and what parts are just wasting time and space. 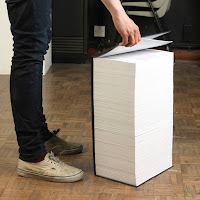 Which brings us to my second clever point...
There’s a general idea  I see crop up a lot that stories can be any length.  Any length at all.  I can make the story whatever it needs to be—fifty pages long to five hundred pages long.
And while, in a general sense, there’s some truth to this, the stark reality is that there are a lot of limits on how long a story can be.
Look at screenwriting. We all acknowledge that movies are generally ninety minutes to a little over two hours.  It’s just how it is.  When a movie’s only seventy-plus minutes... we feel kinda cheated.  It can be really good, but almost always there’s a response of “That’s it?  Only seventy-one minutes?”  Likewise, when a film stretches out over two and a half hours, it usually feels pretty excessive.  There are a few really great just-shy-of-three-hour movies, but there are a lot of really bloated, desperately-in-need-of-editing ones.  So if my screenplay doesn’t fall in the 90-130 page range... I might get some folks to look at it, but not many professionals are going to take me seriously.
And if I’m publishing... well, paper costs money.  And shelf space in book stores is precious.  Most publishers don’t want to see a massive, beef-slab of a book unless they know they’re going to sell a lot of copies of it.
Ahhh, I say, well I’ll just publish it myself, then nobody can turn it down for financial reasons.  True, but a lot of the POD sources still work off page length to calculate costs, and they’ve got much more hard ranges. Just a few pages this way or that can mean a price jump of three or four dollars per copy. And somebody’s got to eat that cost.  It’s not going to be them, so it’s either me or my readers.  This is why I had to cut almost 30,000 words out of my book 14 --the small publisher couldn’t afford to have it stretch into the next page-range.
Heck, even if I just give up on print altogether and go with epublishing only—check the numbers. Shorter books do better as ebooks, especially from self publishers.  The vast number of folks who’ve had any degree of success with ebooks are doing it with books under 100,000 words.  I think many of them are under 70,000. The “why” of this is a whole ‘nother discussion we could debate for a while, but for now we just need the simple numbers. Ebooks tend to do better as shorter books.
Y’see, Timmy (yep, a double Y’see Timmy—haven’t had one of those in a while) what all this adds up to is limited space.  Those pages are precious.  My words are precious. I don’t want to waste them on irrelevant things.  I want them to be moving things along for the plot and for my characters.  I want the ideas to work for the story, not to be flexing and contorting my story to accommodate some ideas.

A while back a friend of mine was working on a Frankenstein-esque story, and he had this super-cool idea for a detail about the monster’s origins.  And it really was a cool idea.  Thing is... his story was all structured around the idea that we never really learn much about where the monster came from or how it was built.  That was part of the mystery.  There wasn’t anywhere to use this idea, but he was soooo determined.  Even when it made no logical sense for this detail to be revealed, he kept trying to force it into different chapters. Because it was too cool an idea not to use... even though the rest of his story was suffering because of it.
You may have heard that old chestnut—kill your darlings. This is kinda like that.  I may have the coolest line of dialogue, the neatest way to explain something, or the most fantastic description of a giant robot ever, but if it doesn’t work in my story...
Well, then it doesn’t work.

And if it doesn’t work—if it’s not adding to my story—then it shouldn’t be there.
Next time, unless someone has some other ideas, I was going to toss out a few quick little tips about genre and devices.
Until then... go write.