Middleman reference.
Very sorry I missed the last two weeks. Lots going on, which I’ll get to in a minute
I wanted to toss out a couple of quick, easy genre/device mnemonics for you.  These are a couple of things I’ve heard over the years.  Sometimes—when I’m struggling with something in a story—I’ve found them helpful for getting my head wrapped around things.
So, what is it you’re working on right now. Maybe keep in mind... 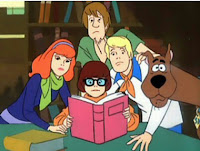 Granted, these are kind of broad definitions, and there’s always going to be an exception or two. But I’ve mentioned once or thrice before the problems that can crop up when I try to push this kind of story into that framework.  And if I’m trying to write a thriller that’s about events that already happened... well, there’s probably a reason I’m having problems with it.  Or maybe my readers are having problems with it.
It’s not a bad thing to double check what I’m writing about and what I think I’m writing about.
Now, let’s flip this and talk about devices.

I think we all mess these up a lot when we’re starting out. We’re trying to use a device or write in a specific genre, but we fall into the patterns of another one.  Or we’re so focused on having, for example, a cool mystery that we don’t realize we’ve actually set up a twist.  And it’s kind of a weak twist because... well, we’re still trying for a mystery.
Worse yet, sometimes we learn these mistakes.  They become that thing we’re convinced is right because we never learned anything different. And so we stick with these mistakes for years, focusing on other things instead fo the one clearly-wrong thing.
Make sense?
That’s why I like a lot of these little mnemonics.  They’re easy things to keep in the back of my mind and check my work, so to speak, every now and then. Good for starting out, good for later on, too.
Next time...
Okay, truth is, I had surgery last Tuesday.  Nothing super-serious, don’t worry, but it was pretty intense and the painkillers have really knocked me for a loop (and really messed with my sleep). Heck, this post was mostly done last week and I couldn’t pull it together long enough to get this up on the site.  Barely got that cartoon up the other day.
Long story short—no idea if I’ll have a coherent post done for next week.  August might be my lame month.
At the least, I’ll put up another cartoon. At the best... well, we’ll see how close I am to reality at the given moment.
As always, please feel free to toss any requests or suggestions in the comments below. Or any handy mnemonics of your own.
Until then, no matter what... go write.