Just a few quick thoughts this week. Well, not super-quick. It’s a simple idea, but it might take a bit to explain. 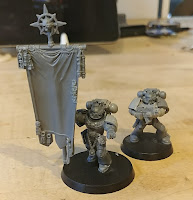 As some of you may know, I have a habit of watching B-movies on the weekend, and often tweet out my thoughts and critiques of them while I build up my armies of little toy soldiers. I recently had a brief epiphany about a common problem they have, and it’s a problem I’ve also seen in books, comics... really, in pretty much every form of storytelling.  And it kinda grows off something I’ve talked about before.


A common problem in B-movies (but as I said, it shows up in all story formats) is trying to figure out who I’m supposed to be rooting for. The story gives us protagonists who are dull, completely unrelatable, offensive, or just plain annoying. Heck, sometimes it’s not an “or” situation but an “and”—the storytellers double down on just how bad a lead character that can have, on several levels.

And I find myself wondering how this happened. How did the storytellers settle on that person as their protagonist?  They don’t hit any of the benchmarks of being a hero—either in the protagonist or heroic sense. They’re not even a good character in a general sense. So why are we spending all our time with them?

Which is, I realized, the key problem.

When we end up with protagonists like this, it’s the storytellers falling back to default mode. We’re not making any changes or adjustments of our own, we’re just going to pick up the story and run with it as-is.  It’s factory-settings storytelling, so to speak.

But there’s more to someone being my protagonist than just awkwardly being the center of attention. They have to be an active part of the story. Really, they need to be the active part, because if I’m focusing on them it’s their story.  And, seriously, why would I focus on them if there was another character doing more to drive the plot forward? If somebody else is doing more, it’s probably their story and I should really be focused on them.

And even that’s just the nuts and bolts structural stuff. There’s still all those stories where it’s assumed just because Wakko is our hero-by-default that everything he does is automatically, well, heroic. Every line of dialogue he speaks and every action he takes must be good because its the hero speaking/taking them. That’s the very definition of the hero, right—what they do is flawless and heroic!


Y’see Timmy, the default settings can work, but there’s nothing special about them. In fact, they’re usually not that great. Adequate at best.

And we all want to be better than adequate, right?

Oh, and hey-- next weekend is the Dystopian Bookclub (a.k.a. We’re All Gonna Die!) at the Last Bookstore in LA. We’re reading Lilith’s Brood by Octavia Butler, and if you start soon you could have it done in time to join us for wine and snacks and interesting discussion.

Next time, I want to go over some numbers with you.