A full day late. So very sorry.  I could make excuses about surgery and blood and all that sort of stuff but... well... No, actually that's a great excuse. And it's the truth.  So there--I regret nothing!
Okay, I’ve brought up a few times my Saturday viewing habits and why I do it.  After a few awful flicks last weekend, though, it struck me that a ton of B-movies tend to make the same mistakes. I mean, they all usually have a unique way of doing it, but they all tend to go wrong in a lot of the same ways.
And I say a lot of this as a guy who hasn’t just watched a lot of B-movies (and read a lot of scripts), but worked on many as well.  I saw a lot of these mistakes happen in real time.  Sometimes inherent flaws or technical issues, but many other times it was story elements that could’ve been fixed with very little work.
No, nobody listened to me then, either.
Of course, this is also true of a lot of stories in general.  They all tend to go wrong in similar ways.  That’s kinda how this big pile of rants got started.
So, even if you’re not interested in screenwriting, there’s probably a helpful thought or two in here somewhere for you.
Okay, top ten B-movie mistakes starts with...

Let’s just get this one out of the way, because it’s the easy one.  This’ll be a horrible blow to anyone who likes auteur theory, but the simple truth is there are a lot of professional directors out there who have no clue what they’re doing.  None.  Yes, even some directors you’ve heard of.  They have no business sitting in a director’s chair.  Even one they bought at Target and keep on their back porch.  They have no concept of narrative, continuity, pacing, anything.
And I’m not just pulling this opinion out of my butt.  I worked with a lot of truly fantastic, brilliant directors during my time in the industry, but I also worked with some really awful ones.  And friends shared stories of awful ones they’d worked with.  It’s a lot more common (and widely known in the industry) than most film professors would like their students to believe.
My point is, the director’s the one determining how the story is being told. Their job is to interpret the story on the page into a visual story on the screen, and the best story can be ruined by a bad storyteller.  How often have we seen a book or movie that had such a cool idea or interesting character... and it was just wasted?

# 9-- Looking down on genre stories
Lots of B-movies have kind of an ugly cynicism to them.  I’ve seen this on a few projects—directors, writers, or producers (or some mix thereof) who think they’re too good for the story they’re working on at the moment.  I was on a sci-fi project where the production designer wanted to do something glaringly inaccurate because he felt it looked better.  His justification?  “Who’ll know?”

I’ve heard people say they might try writing romance because it’s “so easy,” or fantasy because “you can just make it all up.”  These are simplistic, demeaning ways to look at these genres, and that sort of scorn’s always going to show in the storytelling. It doesn’t matter if it’s the latest hot thing—if I don’t like it, don’t have a background in it, don’t really want to do it... it’s probably not going to turn out that great.

# 8-- Too Much Stuff
D’you ever play Dungeons & Dragons when you were young?  Remember that one kid (we all knew this kid) who got so excited to be Dungeon Master, and made that awesome dungeon with five liches and ten silver dragons and twenty gold dragons and thirty minotaurs all wearing +3 plate armor and using +5 flaming axes and a hundred zombies and Demogorgon and half the Norse gods and...
You remember that, right?
Some B-movies get like that.  The filmmakers have too many ideas—way more than their budget or schedule allows—and they try to stick them all into the story.  Every cool idea from every other cool story, sure to be just as cool here, right?
Truth is, they almost never are.  All these extra ideas just end up being under-developed distractions at best.  And at the worst, well...

# 7-- Wasting Time
Okay, this is kinda related to the last  point.  The flipside of it, really.
There are a couple shortcuts people use in storytelling to make us like characters.  There’s one called “saving the cat” that you’ve probably heard of.  There’s also giving someone a backstory that connects them to another character.  And there’s banter and bickering and all sorts of little dialogue tricks.

Thing is, in the limited space of a movie script, all these things need to be serving a purpose.  If that touching backstory doesn’t come into play somehow, it’s just five minutes of filler I could’ve spent on something else... like the plot.  Maybe ten or fifteen minutes when we add up everyone’s touching backstories.  There’s nothing wrong with a well-rounded character, but we want those curves to go with the flow of the story, not against it.

#6-- Bad action
We’ve all seen this one, right?  The awkwardly-slow fight scenes.  The medium-speed chase that drags on waaaaaay too long.  The melodramatic challenge that clearly didn’t need to happen.  Or just shouldn’t’ve happened.
Action gets seen as filler a lot, and it doesn’t help that a lot of gurus teach it that way.  “Hit page 23, action beat. Hit page 42, action beat.”  There’s nothing wrong with action, but bad action hits worse than just about anything, especially in the visual storytelling format of movies.  If it drags on the page, it’s not going to be better when we film it.
Think of scale, too.  It’s always better to have a small, well-done action scene than a sprawling, poorly-executed one.  I can relate to two people fighting so much better that two gangs of sixty people each slamming together.

#5-- Not knowing what genre my story is
I worked on a B-level sex-revenge-thriller once, and the director was convinced he was making a noir mystery.  I’ve seen sci-fi and fantasy movies that were done as horror films, and vice versa.  Heck, I’ve written stories where I’d planned it as one thing, and realized halfway through it was something very different.
I just talked about this a few weeks ago, so I won’t go into it too much here. To sum up quick if you don’t want to hit the link, all genres have certain expectations when it comes to tone, pacing, and even structure.  If I’ve got a story in one genre that I’m telling with the expectations of another, there’s going to be a clash. And that clash probably won’t help my storytelling.

#4-- Killing the wrong people
Okay, so there’s always going to be collateral damage in stories—especially action stories. The nameless bystander who catches a bullet.  The dozens of office workers crushed when a giant monster slams into their building.  The person who dies in the early weeks of the epidemic.

Thing is, by nature of being collateral damage, the story doesn’t focus on these people and their deaths don’t really register with the audience or within the plot.  And they shouldn’t. That’s what collateral means after all—they’re secondary. Not as important.
I’ve mentioned before the awful habit of introducing characters for no purpose except to kill them.  We meet Phoebe, get five minutes of backstory and –bang- dead without moving the plot forward an inch.  Because Phoebe was never part of the plot, she was just there to wear a bikini top and let the FX crew show off.  That kind of thing is wasting time, as I just mentioned above.
The only thing worse than this is when it’s time for the heroic sacrifice... and my hero doesn’t make it.  A minor character steps forward to leap into the monster’s mouth or climb up to connect that last cable to the junction box, even though the power flowing through it could kill him.  So the "hero" sits and watches while someone else saves the day.
Why are they the hero...?

#3-- Showing the wrong thing
This comes up so often it’s sad.  It kinda falls under bad directing, but I’ve  seen it many times where it was clearly a problem inherent in the story.  Sometimes a story keeps pushing X in our face when we really want to see Y.  Or Z.  Sometimes the story calls for Y to be the center of focus, but we still keep seeing X.
I saw a B-movie recently that didn’t show the love interest’s face until almost twenty minutes into the film.  The movie kept having clever angles and shots... but it didn’t show her face.  Watched another one where the monster was revealed in a horrible panning shot that racked to it in the background.  In both of these cases, we were seeing the wrong thing—or the right thing the wrong way.
I’ve talked about subtlety, using the scalpel vs. the sledgehammer.  That’s part of this, too.  Sometimes there’s a reason we’re seeing a swirling mass of blood and gore, but all too often... it’s just because the storyteller doesn’t know what else to show us. 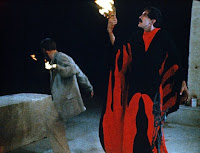 So many movies have painfully bad dialogue.  Arguments for no reason. Awful technobabble.  Annoying characters who won’t stop talking. And sometimes—too much of the time—it’s just bad.  It’s awkward, clumsy dialogue that sounds more like people reciting prepared statements than, well, talking.
Bad dialogue always drives me nuts because it means the storytellers have no idea how human beings talk or sound. It’s a massive failure of empathy, and that lack of empathy almost always shows up elsewhere.  I’ve never, ever seen a story with bad dialogue that excelled everywhere else. This almost took the #1 slot.
But, the number one thing B-movies tend to screw up...

#1-- Who am I rooting for?
This is the killer. This one brings so many B-movies to a grinding halt.
I’ve seen sooooooo many movies with absolutely no likable characters.  Everyone’s self-centered or obnoxious, idiot or arrogant.  They’re just awful, sometimes disgusting people. All of them.  The bad guys and the good guys.  People start dying and I’m honestly not sure if I’m supposed to be sad or cheer.
If I’m going to sit here for ninety minutes—and remember the story afterwards--I need a reason to follow someone besides “they’re the main character.”  I need to like them and I need to be able to identify with some aspect of their personality.  The story needs to have someone I actually care about, because if it doesn’t I just won’t care if they win or lose. And if I don’t care about that... well...
Game over, man.

So there you have it. My top ten B-movie flaws, based on years of awful movie watching. And reading. And making.
Feel free to offer one or two of your own.
And then go write.