Pop culture reference. Haven’t done one of those in ages... 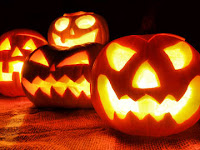 I've blathered on about different genres a bunch of times. It seemed like this might be a good time in the year to revisit one in particular that I haven’t talked about in a while. On the off chance you haven’t noticed the sudden rise of bats, pumpkins, and scarecrows in your neighborhood, we’re going to be talking about horror.

Maybe it’s just the particular bubble I’m in, but it feels like horror’s finally, truly inching its way out into the mainstream. Even just ten or fifteen years ago, a lot of folks still viewed horror as this big, general bin filled with Satanists, slashers, and screaming people. And, let's be honest, anyone who wrote horror clearly was just working through tons of childhood issues, right? Probably didn’t help that for years there were some folks who loudly insisted you could only write horror if you’d gone through something traumatic...

Simple truth is, just like sci-fi or comedy or romance, horror stories get broken down into many different sub-genres.  Us is horror, sure, but that doesn’t mean we immediately lump it in with the new Halloween reboot. Cherie Priest’s The Toll is horror, too, but that doesn’t mean it’s doing the same things as Wesley Chu’s Walking Dead tie-in book, Typhoon. And none of these are like my story Dead Moon.

I’ve mentioned once or thrice before that sometimes things get the wrong genre label hung on them, and it creates a clash of expectations. We went in told we were getting a story that would do this and this, but got one that did that by using that. And, personally, I think this is true with sub-genres, too. If I tell readers they’re getting a slasher story and it turns out to be much more of a monster story, there’s a good chance a lot of the story is just going to feel off balance to them. It won’t hit a lot of the “correct” benchmarks my audience is expecting.

That said, I wanted to toss out a couple different sub-genres of horror to think about. Some of them are well established and have been discussed (and debated) to death.  Others are just things I've noticed and named on my own that I feel are worth mentioning. I’ve brought up a lot of them before.

This one’s easy. It's pretty much the classic spooky story. The pale woman out hitchhiking alone in the middle of night.  The awful-smelling thing down in the lower berth. That creepy guy in the elevator letting you know there's room for one more...

There are a few key things about these stories.  One of the biggies is that our protagonist usually doesn’t suffer any physical harm. Their underwear needs to go through the wash three or four times and they may not sleep well for years, but overall they tend to come out okay. If anyone suffers in a supernatural story it's usually the bad guy or a supporting character. Also, these stories tend not to have explanations-- they just are. There aren't any cursed objects or ancient histories at play.  This is just the kind of stuff that happens in a supernatural world.

Thrillers
Thrillers stand a bit away from the pack ‘cause they tend to be more grounded than most horror stories. Very few vampires, no demons, not a lot of machete-killers. Even if they have a supernatural element, the horror rarely comes from that element. They’re very real-world horror stories, for the most part.

The key thing is that a thriller’s all about right now.  It's about the ticking clock, the killer hiding behind the drapes, or the foot that’s just inches from the lethal booby trap. There's a lot of suspense focused on one or two characters and it stays focused on them for the run of my story.  A thriller keeps the characters (and the reader) on edge for almost the whole story.

Giant Evil stories
These are the tales when the universe itself is against my characters.  Every person they meet, every object they find, everything they do--it all serves some greater, awful evil. It’s just so big and overwhelming. You may have heard the terms “Lovecraftian horror” or “cosmic horror” too.

I think a lot, if not most, post-apocalyptic stories fall here. The ones that lean towards horror over sci-fi, anyway. The entire world now belongs to the zombie hordes, the cannibal gangs, the killer virus, whatever. I’d probably toss a lot of haunted house stories in here, too, because the haunted house (or ship, or insane asylum, or spaceship, or whatever) is essentially the universe of the story.  There’s nothing else for us or for the characters to interact with. 1408, The Shining, and Event Horizon could all be seen as supernatural stories, but their settings really elevate them to giant evil stories.

When you get right down to it, these stories are just about body count. How many men, women, and teenagers can the killer reduce to cold meat? Point to note--almost never children.

One of the big things with slasher stories is there's usually a degree of creativity and violence to the deaths, although it's important to note it's rarely deliberate or malicious. It's just the killer using the most convenient tools at hand for the job. They’re pretty much a parkour of death. The original Friday the 13th franchise pretty much became the standard for slasher stories, and it's what most people tend to think of first when  the term comes up.

A lot slasher stories used to have a mystery sub-element to them, trying to figure out who the killer was. Then it kind of morphed into being a (usually) weak twist. Slasher stories also developed a bad habit of falling back on using insanity as their only motivation and got stereotyped as "psycho-killer" movies. Which is a shame 'cause some of them are very clever and creepy.

The tales in this little sub-genre tend to be about unstoppable, inescapable things that mean the protagonist harm. Monsters are rarely secretive or mysterious, but they do have an alarming tendency to be nigh-invulnerable. The emphasis here is that there's nothing my heroes (or anyone else) do can that'll stop this thing's rampage, and any worthwhile rampage tends to involve people dying.

I just talked about monsters a few months back, so I won’t rehash a lot of that here. You can just go read my birthday post.

Adventure Horror stories
To paraphrase from the original Hellboy movie (which fits nicely in this category), adventure horror is where the good guys bump back.  While they may use a lot of tropes from some of the other subgenres, the key element to these stories is that the heroes are fighting back. Not in a desperate, flailing way, but in a trained, well-equipped, locked-and-loaded way.

I’m not saying it won’t go exceptionally bad for them (and it often does), but there stories are about protagonists who get to inflict a bit of damage and live to tell the tale.  For a while, anyway.  To quote an even wiser man... even monsters have nightmares.

So there’s a couple of subgenres we could break horror down into.  And like I said before, there’s many more.  It’s not a complete list, and you can probably think of some others we could talk about. Feel free to add ‘em down in the comments.

Also, why are we talking about this?

When most of us start off as writers, we flail a bit. We attempt to copy stories even though we don’t quite understand all the mechanics of them.  We’re not sure where our own stories fit under that big horror umbrella (or sci-fi, or fantasy, or...).  We'll begin a tale in one sub-genre, then move into a plot more fitting a different one, wrap up with an ending that belongs on a third, and have the overall tone of yet another.

At the worst, they'll all remember me as "that idiot" the next time they see something of mine.

Next time... well, next time it’s actually Halloween. But it’s also the day before November begins. And for a lot of writers November means NaNoWriMo. So I wanted to toss out a few quick thoughts about that.