A League of Their Own...

Sorry for missing last week.  Just had a couple of those jumbled days where I kept getting called away for other things.  And while I had a topic for this week, it never quite gelled the way I wanted it to in my head.  Although four or five others did, so I’m set for a while here.
(topic suggestions are always welcome in the comments, though)
Anyway... 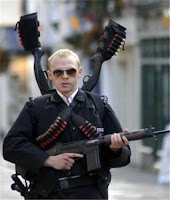 I wanted to talk a bit today about godlike characters.  Not just in the sense of robes and brilliant auras and hurling thunderbolts.  Sometimes it’s that rugged, locked-and-loaded man or maybe the tall, super-competent blonde.  Really, it’s anyone who is, for one reason or another, way beyond the level of every other character in the story.
Which really means they’re out of everyone’s league.
Quick segue.
One thing that I see come up in discussions of different open-play, MMPORG type games is a balance between players.  For purposes of this discussion, it’s when the overall population of the game has hit a level where it’s essentially unable to support new players.  If everybody’s level 72, it makes it tough for anybody to interact at level one. All those 72’s are using their bigger, badder gear to go on bigger, badder missions, where they’ll face bigger, badder monsters and get even rewarded with even... well, you get the point.
Meanwhile, I’m over here in the goblin village, poking at things with a knife and hoping I can get my dagger skill up to 65%...
And if we actually have to fight each other?  Well, I don’t have a prayer.  I mean, we can argue that statistically there’s a chance, but really... there’s no chance.  And from the 72’s point of view, I mean, can we even call it a wasted three seconds?  Yeah, there may be some jerks who just like beating up the noobs, but for everyone else... yeah, this gets to be kind of boring, right?
See where I’m going with this?
Stories need this kind of balance, too.  We want characters to have a chance at achieving their goals, but we also don’t want it to be easy.  If the story leans too far one way or the other, it just gets dull.  For everyone.
F’r example...
If my antagonist is all-powerful, my hero never has a chance.  That’s boring as hell.  There might be a few dramatic moments, if the writer really knows what they’re doing, but probably not.  We all know how it’s going to end, and if we know where it’s going... well, then this is all just noise.
Plus, it’s discouraging.  We identify with the heroes.  That’s why we’re reading.  And to see someone we identify with get beaten down again and again by an opponent we absolutely know they can’t beat...
Well, it doesn’t make for a lot of repeat reads, let’s say that.

Keep in mind, too, my antagonist doesn’t have to be a seven foot-tall somebody in body armor and a chrome skull mask.  The high school mean girl, the abusive drill sergeant, even society in general-- any of these can be the antagonist.  And, again, if there’s no chance whatsoever of beating the antagonist, my story isn’t going to hold most people’s interest.
I’ll also point out that beating the antagonist doesn’t always mean bringing about their ultimate, final defeat.  But as far as our immediate story’s concerned, the bad guy needs to have a chance to succeed at their immediate goals.  No chance means no interest.
Now, as I hinted above, the flipside of this is also true.  If my main character has absolutely no chance of ever being stopped or hindered in any way, that’s not very interesting either.  I’ve talked about this once or thrice before.  When Yakko can effortlessly deal with anything the antagonist, nature, or the universe itself throws at him, it gets boring really fast.  If Dot’s prepared and trained for everything, to the point there’s little or no chance of failure, that means there’s no challenge.  And no challenge means... well...
An analogy I’ve mentioned before is me getting a glass of Diet Pepsi.  Not exactly something epic stories are built around.  You’re not going to see teams of people stealing ships, racing down city streets, or forming Fellowships around me as we undertake the great adventure of going to the kitchen and opening the fridge.  Because it’s mundane.  It’s easy. There’s absolutely no challenge in it.
Even if something might be challenging for us, personally, it doesn’t mean we want to watch someone else do it with no effort.  I’m pretty sure if a zombie plague ever descended on the world, I’d be one of those folks gone in the first week or two.  But I don’t have any interest in reading three hundred pages of someone who walks through the undead apocalypse like it’s a guided tour.  Yeah, no matter how colorful the descriptions are of zombies being blown apart.
Y’see, Timmy, if there’s no challenge—because either my protagonist or antagonist are too powerful—it means there’s not much of a plot.  As I’ve mentioned before, no plot makes it really tough to have a story.  And you may have noticed there’s not a big market for high-stakes character descriptions.
I also want to toss out one other downside to nigh-omnipotent characters. Gods are boring as hell.  Seriously.  They’re tough to relate to, and if people can’t relate to my characters, they’re probably not going to make any investment in them.  Good characters have needs and desires and flaws, but godlike powers tend to nullify most of those things.
Even if it’s not actual powers, it can be dull.  When you have characters who can do anything and succeed at anything... it just gets boring fast.  We like reading about problems, not about potential problems that were planned for and avoided.

True fact—one I worked very hard at.  My Ex-Heroes books have a super-competent character named Stealth.  She’s their version of Batman.  Every book in the series has at least one example of her demonstrating how she’s hyper-trained and/or four steps ahead of everyone else.
But...
Every book also has at least one example of something getting past her. Something she didn’t catch or didn’t think of or somebody else figures out first.  She’s world’s greatest detective, but she’s still fallible.  She not perfect.
If you’ve got a powerful, competent character in one of your stories, take another look at them.  Do they need to be that strong?  Would they be more interesting if there were two or three scenarios they hadn’t been planning for over the past six months?  Isn’t your story going to be a bit more interesting if success and failure both seem like viable outcomes?
I think it would.
But that’s just me.
Next time I want to talk about something a little more campy.
And maybe update the FAQ.
Until then... go write.