This title might sound familiar, but I’m going to blab about something a little different this week.
Also I may be using the words “narrative” or “tale’” a lot this week, just to cut down on confusion.  You’ll see why as I go on.  Trust me, it’s easier this way.
I’ve talked about plot and story here a few times.  You may remember the idea that plot is what takes place outside my character, story is what takes place inside my character.  Plot affects the world while story affects my character.
I’d like to add to that a bit...
I was writing up a post a few weeks ago and found myself second-guessing a statement I made. Paraphrasing, I said that everything my character does, the decisions they make, the actions they take, is plot.  And I pondered that for a few minutes, then even discussed it with my special lady-friend. After all, aren’t there decisions that fall under story?  Aren’t their actions that could be considered part of the story?
Maybe not...
I think story tends to be a bit more passive than plot.  While plot results from a character’s decisions and actions, story tends to develop from their experiences and observations.  Plot develops from what they’re doing, story develops from what’s done to them.  Story is character development, their arc.

No one decides to fall in love, or to learn to trust again, or to shift their political views.  There’s no single moment where Ebenezer Scrooge decides to give up his miserly ways and be a better person.  We may come to realize these things have happened, but that’s after the fact.  The change kinda happened on its own as we were exposed to new facts and new situations.  Simple truth is... we rarely change by choice.
Even if I have a narrative where someone does make an active decision to trust again, that usually isn’t their story.  Think of any successful tale where someone makes an active decision to change—the end lesson they learn, their big realization, is almost never about that change.  If I decide to lose fifty pounds, I’ll find out I do have the willpower to do this.  Or that ultimately looks aren’t as important as happiness, and Phoebe’s really shallow for thinking otherwise.  Or that I secretly have pyrokinetic powers which have been activated by the sudden metabolic increase in calorie-burning.
But a narrative where I decide to lose fifty pounds and then I just lose fifty pounds?  That sounds boring as hell, doesn’t it?
There’s a good phrase to remember, and I’ve already used it a few times-- “...comes to realize...”  If I’m using this, I’m implying something already happened and my character’s kinda getting caught up. A lot of the time, when I’m talking about Phoebe coming to realize she’s hated her job for years or Wakko coming to realize he’s been pursuing the sexy nurse when he’s really in love with Phoebe... that’s a huge part of their arc.  That’s their story. 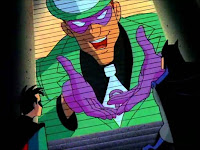 Yes, Batman can also come to realize the Riddler’s been behind this all along. That’s a different kind of realization.  Don’t get pedantic on me.
And it honestly just hit me while I was writing that Batman joke, this might be why so many “story” heavy narratives end up feeling a bit shallow.  To me, anyway.  If I accept that story develops from things happening to my character—that this is where their arc comes from—then how can they have a story without a plot?  If today’s just another day in my characters life where nothing different happens... why would they change?  And any change that did happen to them would feel really unmotivated because...well, there’s no motivation for it. Because there’s no plot.
So when I’m trying to find that plot-story balance in my work, maybe I should keep this aspect of it in mind.  My character can do things to affect plot... but the plot needs to have an effect on the story, too. Despite the title of this little rant, it’s not really plot vs. story, so much as it is the two of them in this sort of mutually-symbiotic relationship where they feed off each other and grow stronger together.
Next time... I’d like to talk about horses.
Until then, go write.