Let’s have a little moment of truth between us. At some point or another, for any number of possible reasons, most of us have been in a position where it’s in our best interest not to answer a question.  Or, at the very least, to take as long as possible to answer it.  A few such questions might be....

Now, by the same token, there are questions that should take no time at all to answer. Things where, if someone asks us and we know the answer, there are very few situations where it makes any sense for us to delay or be evasive. These are the ones where I have to seriously wonder why someone isn’t answering--and they’d better have a damn good reason for their lack of response. A few examples of that would be things like

I mean, why would you hesitate on any of these? If we need the antidote and I know which vial it is, that's a no-brainer, right? Grab the yellow vial marked #23 and pour it down his throat.

For example, I loved LOST.  Yeah, sorry, absolutely loved it. Even the questionable third season. Yes, I will fight you if you say foolish things about the ending. 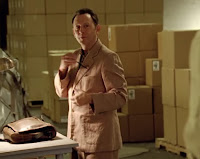 But... I can admit LOST suffered a bit when Benjamin Linus became a regular member of the cast. And a big part of that was because we all knew there was a lot of stuff he wasn’t telling anyone. There were still lots of cool mysteries on the island and Michael Emerson is a wonderful actor... but there were also lots of times where the “mystery” was just Ben sitting there... not talking.

A concept I’ve brought up here a bunch of times is withheld information. I’ve mentioned it a couple times recently, but it occurred to me I haven’t’ really explained it in... wow, ten years? Seriously? Okay, so this is long overdue.

Withheld information is when the characters (or really, the writer) hold back information from the audience for no other reason than to drive the plot forward. Characters just don’t talk about things, even though it’d be very natural for them to. Or they make vague statements when they could just as easily make clear ones. We’ve all seen things like this, yes? Where the only reason there are conflicts or challenges is because characters just aren’t saying what they know.

Withheld information’s the clumsy, unskilled version of mystery and suspense. It’s what I fall back on when my story doesn’t actually have a mystery but I’m trying to create the illusion of one. Because there’s more to a mystery—or suspense, or a twist—than me just not telling my readers stuff.

The thing is, withholding information is really just me and my characters... not doing anything. The plot may keep advancing in a clumsy way, but it’s almost always going to end up falling flat. Because information in a story tends to hit a tipping point. There comes a time when that knowledge has to come out because it just makes absolutely no logical sense for it not to. And when it doesn’t...

Y’see, Timmy, the one thing withheld information definitely creates is frustration with my reader. If Wakko’s been poisoned, Phoebe knows which one of the vials is the antidote, and she’s just not telling anyone—that’s just going to annoy the hell out of my reader. I mean, yeah, it makes the scene more tense, but why wouldn’t Phoebe save her friend? Why wouldn’t she help? If she’s the villain, sure, but other than that...?

And, wow, if we get to the end of the story and that’s when we find out Phoebe knew which one was the antidote and didn’t say anything? I mean, I need to have some ironclad reasons for her silence then. That’s when my readers are going to be looking to punch holes in things, so I need things to be sooooo solid if I’m going to go this way.

Now, all of this doesn’t mean I need to tell my readers everything. But what I don’t tell them depends on what kind of effect I’m trying to create in my story. If I withhold (or give out) information at the wrong points, my story’s going to trip over its own feet. So to speak.

So here are three story elements and how they use information.

A mystery is when the main character and the audience are aware a piece of information has been hidden from them, and my story usually involves a search for that unknown fact. At it’s simplest, a mystery is a question someone in my story is asking and trying to find the answer to.

Suspense is when there’s an important piece of information the audience knows and the characters don’t. The key here is that the characters don’t know that they need to know this vital fact. ussually as soon as possible. Like that Phoebe (who Wakko’s taking back to his hotel room) is the murderer. Or there’s a bomb under the table. These are common suspense situations we've all been in, right?

A twist is when a piece of information is revealed that my characters and my readers didn’t know was being kept from them. They didn’t even suspect those facts were out there, waiting to affect the story. A twist comes from out of nowhere and changes a lot of perceptions for the reader and probably the characters. We’ve all been assuming <<SPOILERS>> Luke Skywalker’s father is dead, so when we learn that Vader is his father, it’s a twist that alters our view of several things we’ve been told up until now.

If I’m trying to use one of these devices, I want to make sure I’m using them correctly. I don’t want to just withhold information. My characters should be just as smart and clever as my audience, and if they aren’t talking... well, I should be sure there’s a solid reason why.

Next time, I’m going to try to answer another question that got tossed my way.