There’s an empathy issue I see crop up a fair amount of time, and I ran into it a few times back in my film days, too.  I just hit a big patch of it recently, and it was while I was working on a pitch/outline that also kind of skirted around it.  So I figured it was worth talking about a bit here. 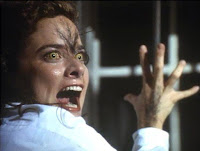 That big patch I mentioned was a werewolf anthology I read (some monster names may have been changed to protect the innocent).  One of the things that amazed me was how many of the stories had a “big twist” which turned out to be—ready for it?—this is a werewolf story!  Some of these were pretty good... but I still ended up twiddling my fingers once it became apparent where things were heading and I had to wait for the narrative to get there.
Now, granted, in this particular case a fair share of the blame for that falls on the editor.  Why would I accept a story for my anthology that’s undercut by... well, the very nature of the anthology?  That just seems like a bad idea.
But why submit such a story, either? Shouldn’t I, the writer, immediately realize that anyone who picks up the anthology is already going to be clued in to my big reveal?  And shouldn’t I be aware of the failings that creates in my story?
Either way you look at it, nobody’s thinking about what the readers are going to know when they sit down with this story.
Simple truth is, what my audience knows affects what kind of story I can tell.  It’s going to affect my structure. Maybe even my genre.
No, seriously.  Imagine trying to write a mystery story where we all know who the murderer is from the very start.  Before we even pick up the book.  If I try to tell that story in a normal mystery format with normal mystery tropes, it’s going to collapse really fast.  The whole structure of mysteries is based around the audience not knowing certain things, so if they already know them... well, that’s going to be a tough sell.
Remember that pitch/ outline I mentioned?  It’s loosely inspired by an old ‘50s sci-fi movie.  But one of the big issues is that the “science” that drives most of the story in that movie is just awful.  Oh, it might’ve been borderline acceptable back in the day, but these days my niece could poke a dozen holes in.  And she’s a high school freshman. In Texas!
That’s how weak the science is.
So if I want to tell that story now, I’ll need to change a lot of things.  Those rationales and explanations just won’t hold with modern readers because they know better.  It’ll kill their suspension of disbelief almost immediately and they’ll give up on my story before they get to chapter five.
And I don’t write big chapters.
As I mentioned above, both of these examples deal with an empathy issue.  I have to be aware of what my audience knows.  What’s common knowledge, what’s obvious, and what sort of thing they’re already aware of.  And I need to understand how that knowledge is going to affect the reception and dramatic structure of my story.  Something they already know can’t be a surprise, and something they know is wrong can’t support a string of plot points.
Please note an important difference here. Wrong doesn’t mean not real.  I can propose tons of alternate histories or secret societies or fringe science breakthroughs. I’d love to give you guidelines for making up planets or technologies or imaginary animals.  But the simple truth is... it’s an empathy thing.  Every thread in every story is going to be unique and different in how I present it and how you receive it.
Semi-related---this is also why spoilers suck so much.  They literally change the story I’m telling (or reading) because they change what the reader knows.
For example...
I’m going to spoil The Sixth Sense, so if you haven’t seen it, stop reading now and go watch it. No, seriously, go.  The whole point of this is how knowing things can mess up how you receive a story, so if you keep reading you’ll never be able to watch The Sixth Sense the way you’re supposed to.  NEVER.  If you’ve somehow managed to avoid it until now, I don’t want to be the one to take it away from you, so stop reading.
STOP! 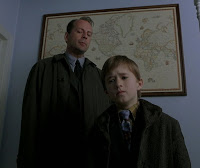 NOW!!
Okay, now that those folks are gone...
That big reveal at the end of The Sixth Sense is a jaw-dropping moment when we hit it for the first time.   But if we go in already knowing Bruce Willis has been dead all along, this is a very different story.  It’s almost an afterschool special.  “The Boy and his Phantom Psychologist,” Thursday at four on ABC.
More to the point, that ending doesn’t have the dramatic weight it would without that knowledge. And it never can.  We can’t unlearn things, much as we’d like to.
Once something’s been spoiled... that’s it.  No takebacks.  No mulligans.
I’ll even toss this out.  The ending of The Sixth Sense was such a powerful moment that it got copied many times--often by people who didn’t really understand it.  But this often-copied ending still ended up out there.  It became common.  And because it was common knowledge, so to speak, it changed how writers can tell that sort of story.  These days, most readers know to look for that sort of twist.  And they’ll pick up on the subtlest of clues or hints.  And I need to be aware of that if I want to tell one of those stories—that people will almost be expecting it.
Because if I don’t, I should know I’m about to make some clumsy mistakes.
Next time, I want to talk about some more basics.
Until then... go write.