For those who never played it, Jenga involves making a tower out of long wooden blocks. Then multiple players take turns sliding the blocks out without toppling the tower. Eventually, though, someone will pull out one block too many and it begins to sway. It might stabilize. It might not. In the next turn or two that tower’s going to come crashing down into a pile of wooden blocks.

More on that in a minute...

I’ve mentioned the idea of withheld information once or thrice before, and it struck me that I’ve never quite explained what it is and why it should be avoided

Withheld information is when the writer or characters hold back facts from the audience for no other reason than to drive the plot forward. It’s the clumsy, unskilled version of mystery and suspense. I usually see it employed by novice writers who don’t have a mystery but are trying to create the illusion of one.

If you think of it in terms of Jenga, withheld information is when you know the next block is going to make the tower collapse... so you pass your turn to Wakko. Who in turn passes his turn to Phoebe. Who passes it to Yakko. Who passes it back to you. Yes, the game is still going on, but it’s only continuing because it’s stopped moving forward. And has become very boring in the process.

Like Jenga, information in a story can hit a certain tipping point. There comes a time when you have to tell the reader everything because it’s foolish not to. I can have the mystery, I can have the characters discover the answer... and then I need to let the audience know the answer.

At some time or another, most of us have been in a position where we have a vested interest in not answering a given question. Or taking as long to answer it as possible. A few such questions are....

“Do these jeans make me look fat?”

“Are you claiming this as a deduction?”

“Did you eat the last piece of cheesecake?”

“Is that lipstick on your collar?” 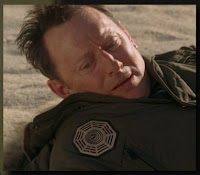 Now, by the same token, there are questions that should take no time at all to answer. When life and limb are at stake--or when nothing at all is at stake--nobody beats around the bush. These are the times you have to seriously wonder why someone isn’t answering a question--and they’d better have a damn good reason for not answering. I loved LOST. Absolutely loved it. But it did suffer when Ben became a regular part of the cast because we all knew that he knew stuff he wasn’t telling us. While there were still lots of cool mysteries on the island... well, there were also lots of things where it was just Ben sitting there with his lips pressed together in that creepy flat line.

There’s a sci-fi show on right now that suffers from this. I won’t name names, but a third of the show is the government trying to figure out what a group of humanoid aliens are up to, a third of it is one lone character trying to find out the alien secrets that are keeping him from his girlfriend, and one third of the show is the aliens themselves. And the aliens tend to talk in very vague, general terms, like they think every room and car they’re in is loaded with listening devices.

Now, there is a point when the pendulum swings even farther. Sometimes the information has been revealed, but people keep acting and insisting it hasn’t. So the audience is left drumming their fingers while they wait for the characters to learn something that’s already known.

I read a book recently that suffered from this twice-over. First, much like my own Ex-Heroes, it switched styles and viewpoints now and then. Every second or third chapter was done in epistolary form, a series of 16th century letters between a spy and his master, encoded with an elaborate, almost unbreakable cipher. Sounds kind of interesting, yes?

Thing is, most of the other chapters were about a search for the key that would let the modern-day characters read those letters. They’d go on and on about how important it was to decode them and learn the secrets contained within, etcetera, etcetera. So the motivation for a big chunk of the plot--maybe a third to half of the book--was deciphering some letters that had already been deciphered for the audience.

In the same book, though (twice-over, remember), one of the characters also had a secret. I felt there were a few too many clues, but overall it was passably hidden (I guessed it a third of the way in). At the halfway point, two different characters (solving different halves of the secret) came together and realized their halves met to form a whole. I felt clever. The characters didn’t realize what they’d discovered. The “secret” went on and on and was finally “revealed” in one of the final chapters.

In other words, for most of the book the reader is waiting for the characters to catch up.

To keep up our Jenga metaphor, this is when the tower has collapsed but your host is insisting you keep playing. So everyone’s sitting there picking up little wooden blocks off of the tabletop and telling themselves it’s a fun game of skill.

Now, I’d also like to point out that there are times when the audience does know things the characters don’t. That’s where we get suspense, and suspense is great... if it’s real suspense. Y’see, Timmy, one of the keys of suspense is that the characters don’t know they’re lacking this information, but it’s very important they learn it. Life-threateningly important. In suspense the stakes are high and they’re almost always personal. It may not be my life that’s in danger, but maybe the life of my girlfriend, my brother and his family, or even my cats. It’s tough to have good suspense without high stakes that matter to me. And the thing about high stakes is that they eventually have to pay off.

Hitchcock spoke of the bomb under the table (or was it under a chair? Or under the car...?). Wakko doesn’t know it’s there. The audience does. We can see the countdown timer and we know Wakko’s life is in danger. But if the bomb never goes off or Wakko never finds it, that bomb is just as frustrating as the pile of wooden blocks.

So, to recap, here are three great story elements that are not withheld information.

A mystery is when the main character and the audience are aware that a piece of information has been hidden from them, and the story usually involves the search for that unknown fact. At it’s simplest, a mystery is a question someone in your story is asking and trying to find the answer to.

Suspense is when there’s an important piece of information the audience knows and the characters don’t. The key here is that the characters don’t know that they need to know this vital fact. The bomb under the table. Wandering off with the murderer. These are common suspense situations.

A twist is when a piece of information is revealed that your characters and the audience didn’t know was being kept from them. They don’t even suspect those facts are out there, waiting to affect the story. When a twist appears, it comes from out of nowhere and changes a lot of perceptions for the characters and the audience. We’ve all made the natural assumption that Luke Skywalker’s father is dead, so when we learn that Vader is his father, it’s a bombshell that alters our view of everything.

If you’re trying to use one of these devices, make sure you’re using them correctly. Don’t just withhold information from your audience. Your characters should be just as smart and clever as your audience, and if they aren’t talking, make sure there’s a real reason why.

Next time, a wonderful story about Harrison Ford and a bellboy.

Until then go... you know. Do that thing. The thing we were just talking about. That.