Extra bonus points if you get that pop-culture reference.

Sorry for the delay, too. Working out some final kinks in the new computer.

In my car, in that little bin they all have under the cupholder, is a blue and yellow card. It’s from a board game called Goosebumps, based off the book series by R. L. Stein. Many, many years back, when I was living in another city altogether, I was heading out to work and discovered someone had thrown away said game but missed the dumpster. The wind and backwash from other cars had blown pieces every which way. Plastered to the driver’s side window of my car, right by the door latch, was one of the game cards.

MAGIC RING
save this to fight
the headless ghost

Not being a fool, I saved it

Seriously, it’s out in my car right now. I kid you not. Yeah, you’re smirking, but we’ll see who’s laughing when that headless ghost shows up.

This is funny for a couple of reasons, not the least of which is a grown man driving around with parts of the Goosebumps game in his car. Plus, we’re all about 99.99% sure a headless ghost isn’t going to show up anytime in the foreseeable future. I didn’t save the card for its spirit-fighting abilities, just because it makes for an interesting conversation piece.

The card’s also funny because we can probably all agree most magic rings wouldn’t have an inscription that says save this to fight the headless ghost. Heck, in The Lord of the Rings Frodo’s ring was covered with writing, but nowhere did it say wear me to turn invisible and become a megalomaniac. Imagine how silly it would be if a character in a story decided to go hiking one morning, opened the fridge, and there was a raw steak labeled bring this to distract the mountain lion. The only thing more silly, in fact, would be if that character just randomly decided to bring a steak on their hike for no reason. And then a mountain lion showed up.

More than a few times—enough that I feel justified ranting about it—I’ve seen manuscripts or screenplays where characters randomly decide to do something. They’ll decide to go visit Mom’s grave in the country where they haven’t been in years. They’ll toss a first aid kit and some cans of soup in the back seat of their car for no real reason. Or maybe, for no apparent reason, they’ll decide to make a bomb shelter in their back yard.

Lo and behold. Ten pages later it turns out this was precisely the right thing to do. The character’s random, unmotivated decision was the right one to make. That bizarre object they decided to lug around is exactly what they need. 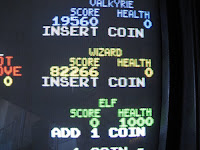 In my opinion, this kind of mentality grows out of videogames. Not the newer, sleeker ones, but the older ones. The game would only have ten or twelve things to pick up, so when you ran across one of them you knew it was going to be important and you grabbed it. This wasn’t really a fault of the games, mind you. It’s just that there wasn’t that much processing power or memory.

There’s two problems here, and they kind of build off each other.

First is that once a writer starts falling back on these sort of coincidences it removes any sense of challenge. We can’t be worried when Yakko is facing the living incarnation of the Babylonian goddess-dragon when he has the silver sword of Marduk that was specifically prophesied to kill her. If Dot is given an all-access passkey, getting locked in the sub-basement isn’t that big a deal. When I reveal my villain’s weakness is romantic poetry and a few pages later we learn the hero had a minor in Byron... well, personally I can’t get too invested in that.

Second is that it’s just shoddy writing. Depending on nothing but coincidence to drive the plot forward is like winning a game using loaded dice. I get to say I wrote a book and Wakko gets to say he won the game, but did either of us actually accomplish anything? Did either of us demonstrate any actual skill or ability? Heck, we weren’t even depending on luck. We handed the character A and then constructed a challenge that would be solved with A.

Sounds a lot like cheating, doesn’t it? On a number of levels.

Yes, William Goldman did precisely this in The Princess Bride with the holocaust cloak and the wheelbarrow. But he’s William Goldman and he did it perfectly. And I’ll save you some more effort—Phillip K. Dick already used the idea in a time travel story, and it was already adapted into a passable movie (both named Paycheck). Not to mention the fantastic Doctor Who episode “Blink” with the Weeping Angels. So give up any thought of doing something clever... unless you can do something incredibly clever.

The very nature of good writing is that the characters aren’t going to do everything right and everything is not going to work out for them. People need to face challenges and they need to overcome them.

Because we all know somebody who got everything handed to them in life. Thanks to TMZ and People magazine, we probably know a couple. And how did they turn out? Were they someone you wanted to follow and keep tabs on? Or someone you couldn’t wait to be done with?

Next time I’d like to talk about this world we live in. Most of us, anyway.