It’s getting near the end of the year and I figured I could get out one or two of the Deep Thoughts About Writing that have been marinating in my brain for a few months. Will they be any good? I don’t know. Marinating can be tricky sometimes. Leave stuff in to long and it just becomes this weird-tasting mush.

If you’ve followed this collection of rants for a while, you’ve probably noticed that I don’t talk about the art of writing that much. It’s not an accident. I believe that most art is highly subjective. I’m also a big believer that this subjectivity means any attempt to deliberately create Art (capital A) is usually wasted effort and, well, kinda pretentious. I also tend to think that sometimes when people talk about Art they’re... hmmmmmmm how to say this politely? 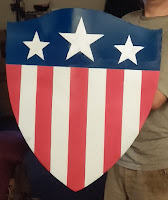 I think they’re making excuses. I think sometimes Art becomes an easy shield to protect a writer from criticism. If art is highly subjective in and of itself, whether or not it’s any good is very subjective. And if any of you have ever visited the internet (surprise—you’re there now) you’ve probably encountered one or two thousand people who are more than willing to explain how and why THIS is the greatest achievement of all mankind. Don’t agree? Well then you just don’t get it.

What I wanted to do was talk a little bit about where I think most attempts at Art go off the rails. Not all attempts, sure, because there’s a bunch of ways, but maybe the top two. Out of, y’know... a hundred and eight or so.

Also, as I have once or thrice in the past, you may see me using tale a lot here. I’m not trying to sound epic or artsy (oh the irony), I’m just trying to cut down on confusion in a couple places. Consider this your warning.

Once or thrice I’ve mentioned Shane Black and his ideas on plot vs. story. I’ve explored them a few different ways, but for time’s sake let’s just say plot is what’s going on outside my character, story is what goes on inside my characters. My own corollary to this is that plot tends to be active, whereas story tends to be reactive.

Now, again, it’s not a 100% every time thing (maybe 83%), but I’ve noticed that most attempts to be artistic lean really heavily on the story side of things. Plot is all but ignored in favor of long monologues about feelings and relationships and purpose and maybe even Art (yeah, seriously meta, I know). In the movie world these sometimes get called character pieces, and they’re usually about people sitting around airports or restaurants or taking long road trips and just... talking.

Nothing ever really happens in these stories. People talk about things that did happen, or might happen, or they’d like to happen, but at the end of the day.. they’re just talking. A key sign is that the characters in most of these tales have no arc, mostly because there’s no plot pushing them to change or develop. Their story never really goes anywhere because, without a plot, there’s no reason for it to go anywhere.

And that’s the catch. Every tale worth telling is a careful balance between plot and story. It’s the things happening outside that my characters are actively engaging in, and how these things are actively affecting and changing my characters. Key word there—active. When I upset that balance, things stop happening. Either my character stops doing things or they stop developing. Or both.

For the record, either one of these is bad. Both is just downright awful. We want active characters who grow and change. I mean... everybody gets that, right?

The other big thing in attempts to be artistic is language. Excessively elaborate descriptions using increasingly arcane vocabulary. Labyrinthine sentence structure in which one could perhaps lose a minotaur. Like, a full-size minotaur.

There’s probably something to be said for the fact that most attempts at writing art lean toward complexity over simplicity. And again, this is one of those times when defensive writers tend to whip around and say this failure is the reader’s fault. “Do you think I should lower the quality of my writing just because you got such a pathetic education you don’t know what uxorious, mytacism, or atramentous mean?”

When I’m writing my primary goal has to be that my readers understand what I’m trying to say. If they don’t understand page one, I can’t blame them for not going to page two. There are ways to make these things work, sure, but I’ve got to accept nobody’s picking up my books hoping for a vocabulary lesson or that they'll need a spreadsheet to keep track of my spiraling plot.

Fun note. When I went looking for the most obscure adjectives I could find, one of the first results was a list titled “100 Exquisite Adjectives” (emphasis mine) which I’d guess was about 20% rare and obscure words most readers wouldn’t know. So let me just ask you... how exquisite is sallisthorian as words go? Do you think most readers would find me pretentious for describing a character that way? Is it too on the nose? If they’ve got no idea what it means, is it their fault for not knowing or my fault for using it? 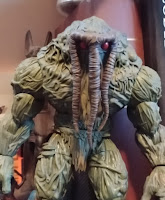 Oh, and for the record, I just made up sallisthorian while writing this. I’m saying it means “like the Man-Thing” (who was, of course, known as Ted Sallis when he was human). And if anybody wants to argue about how were we supposed to know what that means... well, that’s kinda my point, isn’t it?

Y’see, Timmy, that’s the catch with all these sort of artistic additions. I can stick in deep, emotional monologues or elaborate descriptions or super-obscure words just to show how smart or artistic I am, but at the end of the day there needs to be an actual story that my readers understand. It’s a lot like easter eggs—in the end, my story needs to work despite all this stuff. If I’m hoping my story’s going to get by on pretty vocabulary and one long speech about what freedom means to me... it’s probably not going to happen.

Next time, it’s the season and all, so I’d like to talk to you about the holiday season.