This one may ramble a bit.  Apologies in advance.


An idea struck me the other day, and I realized I haven’t talked about it here in a while so I thought I’d go over it again.  And, as usual, the best way to do that is with a story. 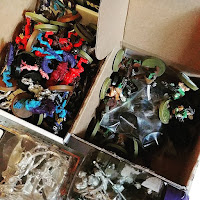 I talked last summer about moving and getting rid of a ton of old Warhammer figures.  I’d built and painted a lot of them.  Some of them were classic figs from twenty-odd years ago.  A few of them were honestly kind of beautiful, in their own way.  A couple were still sealed in the original package.

But, after a surprising amount of soul-searching, I finally just had to admit I was never going to play with these models again on the battlefield.  Or display them in any sort of cool way.  I was keeping them... just to keep them.  Because they were classics and that’s it.  Heck, I’d guess at least a third of them were for armies I didn’t even play anymore.  They were just cluttering up my shelves, and had been for years.  A couple of them for decades.


So I saved a few, maybe six or seven, that I thought I may use someday.  Or just really liked a lot.  The rest... got traded in for store credit.

But here’s the thing.  With them gone, my shelves became a lot cleaner and neater.  And I got a lot better with my hobby time.  I could find things much faster, which meant I was getting more done.   It sounds really straightforward, but getting rid of the clutter that wasn’t doing anything made my hobby much better.

I think this holds for stories, too.  As writers, we like to think the only limit is our imaginations.  But we’re still dealing with other restrictions.  The size of my manuscript.  The size of my cast of characters.  The patience of my readers. If someone’s going to take up space in my story, there needs to be a reason for them to be there.

An example I’ve given before is Guido, the super-strong mutant from X-Factor.  Guido was a fun-loving, John Lennon-sunglasses-wearing guy who made the “gorilla body” physique popular years before Luther in The Umbrella Academy.  Also, as I understand it, now he’s dead and one of the lords of Hell or something like that, because who wants fun-loving characters around when we could have drama, right? Or maybe he’s alive again.  I lost track.

When Guido made his debut with X-Factor at a press conference, one of the reporters called out “He must be the strong guy!  Every group’s got a strong guy!”  Which led Guido to start calling himself Strong Guy from that point on, but also drew attention to the point that... well, yeah.  Every group does have a strong guy.  Because in the stories most superhero comics lean towards, a strong guy is very handy to have around.  There’s a reason to have them on the team and in the story.

In stories, we sometimes end up with characters that don’t serve a purpose.  Perhaps they’ve got a fantastic voice or a really clever description.  Maybe they’re a kind of character that doesn’t get seen a lot.  Maybe I came up with the idea for them in the shower and just really like how they turned out.

But if they’re not really doing anything to advance the plot or the story... I should probably get rid of them.

Before anyone goes nuts, I admit this is a bit of a broad statement.  There are going to be lots of characters in any story, and some of them are going to have a minimal-at-best effect on the outcome.  The guy serving our food.  That woman guarding the armory.  The fourth person to die in the battle.

Thing is, though, I shouldn’t be putting a lot of effort into someone who isn’t actually going to be doing anything.  All my characters should be propelling the plot and/ or story forward.  If they’re just standing around not really doing much... well, why would I spend a lot of effort on them?  Why give them a name and a backstory and a detailed physical description if all they’re going to do is walk up to the table and drop off three drinks?

This brings me nicely to a potential exception to this statement.  Sometimes we just run into someone interesting.  That one person who stands out because of their wild wardrobe or random pearls of wisdom or... heck, I don’t know, maybe they’re just funny and flirting a lot.  It’s not that uncommon to have this sort of chance, memorable encounter.  Think of the bit player in a movie who stands out in a scene just as much as the main character. Sure they exist, and we all love to encounter them in a story.  Sometimes the reason to be there can just be “this is really cool.” 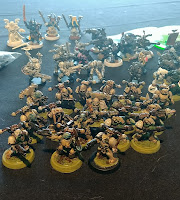 If I’ve got three or four or more characters like this, that’s starting to really cut into my page count.  At just three or four pages per encounter, that’s twelve or sixteen pages of my manuscript that have nothing to do with my story.  It adds up quick.  This is me deciding I’ll keep a few of those little toy soldiers, but just the special ones, and the ones that look good, and the ones that have fond memories, and the rare ones,  and suddenly I’ve put a hundred of them back on the shelf.

If I’m one of those writers who tries to make every single character special... well, there’s a good chance people are going to start getting frustrated with my lack of focus.

Y’see, Timmy, it keeps coming back to that idea of clutter.  Things getting in the way and slowing us down.  It’s okay to a small extent, but once it hits a certain point... we just have to stop everything.  And the people we’re trying to impress with it...  they’ll probably get annoyed with me.  Or flee in terror and call one of those hoarders shows.  Or the literary equivalent of one, I guess.

I may have some of the coolest, rarest, most beautiful characters out there.  But if they’re not really doing anything, I should maybe at least consider getting rid of them.

Speaking of which, next time...

Well, I’m starting a new book, and we haven’t talked about that whole process in a while.  So maybe I’ll talk a bit about drafts.  Unless one of you has something else you’d rather hear about?