Killer Sex Robots and Other Stories

I’m having a really crap day, but fortunately for you, this was already pretty much done. And maybe blabbing on about writing will make me feel better about stuff.  Probably not, but what the hell...

I’d like to babble on about another one of those “this is so self-evident why are we wasting time on it” ideas that... well, seems to come up a lot. 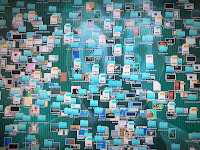 As writers, we get cursed with ideas. Tons and tons of them. Books, comics, movies, epic television franchises, soooo many ideas. And, naturally, we want to use as many of them as we can. Cause they’re all friggin’ fantastic, right?

But, as I’ve mentioned here once or thrice before, that’s not always a good thing, no matter how fantastic my ideas are.  More isn’t always better. Sometimes stories get cluttered with ideas. I want to create a certain kind of character, use this cool idea I saw in a Gizmodo article, explore a few different themes, develop this awesome backstory I came up with, and then wait until you see all the stuff in chapter two!

We’ve all done this. Be honest. If I think I haven’t done this, it probably means I don’t realize I’m doing it right now in my current work.

Now, to be clear, there’s nothing wrong with having a lot of stuff in a story.  My book Dead Moon touches on zombie horror, body horror, sci-fi, action, mystery, and comedy. There’s a lot of talk about sex. There’s some politics. There’s some questions about self-worth and finding your place in the world (or the solar system).

But if you asked me... I’d tell you it’s about zombies on the moon.  Horror and sci-fi.

Let me give you a less personal example. I watched this geekery movie recently that was... okay, let’s just say it was about AI (or was it?  Maybe cloning? I’ll never tell). Anyway, there was a lot in it about the ethics of creating an intelligence solely for a specific purpose (is this slavery??). There was also stuff about the morality of assassination. Plus a lot of assassination-related action scenes. Then questions were brought up about the possible ethical issues when the scientist starts having sex with this thing she created. More so when it turns out the body said scientist made for this AI is the spitting image of her dead husband. Plus there’s a heist element as they plan to rob the CEO of the company. And some torture porn. Arguably some parenting, nature-vs.-nurture aspects, corruption of the innocent bits, too.

Now, all of these could be cool things to bring up in a movie. Hell, any one of them is probably a story in and of itself.  There’s a lot of fascinating character moments that can happen with almost any of these.

But again... what is this story about?

’Cause this AI movie made it about everything. The filmmakers gave every one of these elements equal weight. It was the ethical AI-assassination morality-action-sex issues-heist-torture porn-corruption movie we’ve all been waiting for. Just search for that category on Netflix.

(it’s not on Netflix—the category or the movie)


Is something just a conceit for the story?  Cool.  But to be clear... what’s my story then?  If I’m using clones to tell a long-distance love story, that’s cool.  Super clever. One of you should take that and run with it. But if that’s the case, I probably shouldn’t spend half the book talking about the science behind the cloning.  Likewise, if I’m writing a taut thriller about cloning assassins... maybe there shouldn’t be 250 pages of clone-love in there.

Subplots? Great.  Parallel plots?  Fantastic. Twists that subvert the plot? SOOO COOL! But what is this book about? What’s the dominant idea here? What aspect of the story are we spending the most time with?

Here’s a way to think of it.  There’s a term you may have heard—the elevator pitch. It basically means I should be able to explain my story in one or two sentences, the length of an elevator ride. It comes from the awful idea that I should leap at people when I find myself alone in elevators with them. Because who doesn’t respond positively to that?

Anyway, if I got a chance to elevator-pitch the AI story above, how many of these things do I mention and explain? How many would I leave out? When I’ve only got thirty seconds to tell my story, what parts of it do I not bother telling?  It’s not going to be 100% accurate, sure, but it’s a safe bet my elevator pitch is going to make me really focus on the key things in my story.

And if I can’t focus on them... well, that’s probably telling me something.

Y’see, Timmy, it shouldn’t be that hard to explain what my story’s about.  It can have lots of elements—and hopefully it does—but there should be an overriding idea I can point to and sum up in a few lines.  “It’s about an android assassin who starts to question the morality of his existence, especially when he learns more about his creation.”

Which, alas, is not what that movie was about.

Next time, let’s talk about winding things up.