I touched on something a few weeks back that I thought was worth revisiting.

It’s not unusual for us to set stories in fantastic worlds that are close to our own, or maybe not close at all. Maybe it’s our world but with magic. Maybe it’s a futuristic sci-fi utopia or a historical zombie apocalypse. I’ve talked here once or thrice about the Marvel Universe, and how living there would require an entirely different worldview. 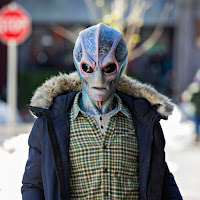 There’s a certain kind of worldbuilding we could probably call  “everything you know is wrong” or maybe “revealing the world behind the world.” It’s one of those stories that starts off as the real world, or maybe a real world, except then our heroes come to learn that there’s a lot more to their world than they believed. We establish that we’re here on Earth, in the real world, and then BAM! Aliens are real, and they live among us! Reality is actually a complex computer simulation.  Secret vampire cabals rule the world.

We’ve all seen some version of this, yes? This moment usually comes right before we start our second act. Now that my characters know what the world really is, they can learn what challenges they’re really up against.

That’s what I mentioned before, but wanted to focus on a bit today. The idea that worldbuilding has to happen in the start of my story. I can fill in details later, but the broad strokes stuff needs to happen early on. Definitely in the first half, I’m tempted to say preferably in the first act.

The reason it needs to happen this early is context. I’ve talked about this a bit before, too. In this case, it’s how we know what’s possible—or what my character thinks is possible—within the world of the story. If we don’t know what’s normal in a story, how do I know what’s supposed to surprise us? I mean, what would be unbelievable in this world? How do I know if my characters are reacting appropriately? If I’m going to keep altering the rules of the world as the story goes on and on, it makes it harder and harder to get invested in the world and the characters.

So if I’m doing some major worldbuilding in act three... it probably means I’m cheating a bit. I’m rewriting the rules in a big way at the last minute. Suddenly, with less than a hundred pages to go, there’s time travel or ghosts or aliens or teleportation or something that puts a whole new spin on everything! And odds are I’m doing it to create some suspense or a new challenge or to get my characters out of a challenge.

Actually, think of it like playing a game. We should have a general sense of all the rules before we really get going. Even if we just handwave over things for now and say “Fighting the basilisk, ehhhh, we’ll get to that one if it ever comes up,” this still tells us there’s the chance of running into a basilisk and there might be special rules for fighting it. So it won’t be a surprise when these rules show up and get explained later. None of us want to play with that person who at the last minute says “Oh, I forgot to mention... I get 100 extra points just for being the blue dwarf.”

But wait, WAIT, says internet guy #23. Hang on! There are LOTS of stories that don’t tell you things up front. That change the rules at the last minute. He was dead all along! They were on Earth the whole time! She’s actually the Viscountess Isabella!

And this is true. Sort of. Third act twists are very common—and freakin’ amazing when they’re done well, BUT...

One of the basic rules of a twist is that it doesn’t violate anything we’ve seen before—it just makes us look at it in a new light. Most of the example twists I just (vaguely) gave don’t change the core premise of their established worlds at all. For example...

SPOILERS!! BIG SPOILERS FOR THE SIXTH SENSE (AMONG OTHERS)!!

When we find out Dr, Malcolm has been dead the whole time, this isn’t new worldbuilding. I mean, we’ve known ghosts are real for most of the movie. We know little Cole can see them. He even flat out told us “some of them don’t even know they’re dead.” The big twist here doesn’t change any rules or limits of the world as they've been explained to us, it just changes how we look at Malcolm and his interactions with it.

Want to use the old classic Planet of the Apes. Or any number of Twilight Zone episodes)? In all of these a key thing is establishing interstellar travel one way or another, so it’s not breaking any rules to say we might be on another planet, or these aliens are from another planet. All of these stories involve the inherent assumption of what planet we’re on. So again, the story isn’t cheating—it’s just playing us because it knows what we’re going to assume about the world we’re being shown.

But if, in his final showdown with Harry, we found out Voldemort was a cyborg alien from the future, that’s breaking the world we’ve established for the past six books. Likewise, if the next season of Picard has him bringing Data back to life using ancient Vulcan sorcery... that just sounds like nonsense on a bunch of levels, doesn’t it?

Anyway, that’s all I’ve got for you.

Next time... well, this Monday’s my birthday. So next time we see each other I’ll be older and wiser. That being the case, I’ll probably have share some of that newly found wisdom with you.