I’m going to be honest with all of you. The clown thing isn’t coming together. I’ve got an idea but I haven’t been able to focus on it enough. My attention’s been split a couple of ways with that big pitch document I told you about and a few other things I can’t tell you about (not yet, anyway). Plus, while you’re reading this, there’s a good chance I’m in the twisty line of cars at the Del Mar Fairgrounds while my lovely partner gets her second shot.

Have you gotten your shots? Faster we all get ‘em, the faster we get to an actual herd immunity. Which means faster we get back to Writers Coffeehouses, conventions, book signings, book clubs... all those things where we get to meet face to face. Get vaxxed!

Anyway. No clowns. We’re putting that one on the back burner.

For now, I’ve got another question from Tantilloon, who decided to push their luck and see what other bits of advice I might have. It’s a bit of a submitting/ publishing question... but it also isn’t.

“I've created some drawings, maps, and renderings of things from the story. Do you think these supplemental materials add value when trying to find an agent?”

This is the main question, although Tantilloon also brought up blogs and playlists. And it’s one of those questions that has the answer in it. Which makes it great for me on days like this where I’m a bit behind.

Really, all of this boils down to “supplementary material.” It’s stuff that, well, supplements the work. Stating the obvious, yeah, but it’s one of those things where I think it’s important to make the distinction. Supplemental material, pretty much by definition, is separate material that adds to my work. But it can do this in a couple of different ways...

First off, it’s really common—I’m tempted to say it’s standard—that we create more than we put into a manuscript. We know details about characters that never get used. We write out whole scenes that get cut. We have diagrams in our head showing where and when and how things happen. This is a normal part of the writing process, for all this background material to exist. And, as I mentioned above, for it not to be in the book. But its existence still adds to the book and enhances it.

For example, I scribbled out a bunch of base diagrams for Dead Moon. I knew how the Caretaker bases were laid out. I had three or four diagrams for —big overall ones and smaller ones that had details for the different streets. And these added to the story because it let me write about Osiris and as if they were real places.

Which brings me to the second kind of supplemental material. Sometimes this behind the scenes stuff I just mentioned (or other, original stuff) gets used for marketing purposes. Little added bonuses to tease people who haven’t read my book and please those who have. Because I think a lot of folks like seeing that other layer of things. To get a peek behind the curtain, or to get parts of the story from a slightly different point of view. And when it’s so easy to spread things across multiple media... why wouldn’t you? Lots of folks release free short stories involving the settings or characters of their books. Sylvain Neuvel did a fantastic (and very educational!) series of videos about rockets and the space race to promote his latest book, A History of What Comes Next. Hell, I called in a bunch of film favors and created some book trailers for the Ex-Heroes books (about four months before they moved to Broadway Paperbacks). I also made up a side-blog about the Kavach building and its residents for 14. And an early chapter that got cut from Paradox Bound became a digital bonus for a PageHabit promotion.

Important sub-note. If you’re actually a fan of my writing, there’s a good chance you haven’t heard of any of this. This stuff is great, but most of the time getting our bonus material seen takes just as much effort as getting our actual work seen.  Which really means my marketing plans were really more like cautionary tales.

And all of this brings us to the third type of supplemental material. I see... well, I don’t know if I should say “a lot,” but I definitely see a number of folks who view the supplemental stuff as part of the whole storytelling experience. They need this other material to understand the story. The readers will find hidden clues to the mystery if they check out those two or three blogs, more details in the lyrics from my playlists, and a better understanding of the nuances of my protagonists’ relationship if they sign up for the OnlyFans account I created.

The catch here is that what I’m describing is less a book and more of  a.. a multi-media experience. Or cross-platform non-linear narrative. Whatever  buzzphrase currently describes this kind of thing. Point is, it’s not a complete, contained book. Not if I have to go here to understand the plot and there to make sense of their motivations and subscribe to that if I want Chapter 16 to make any sense whatsoever.

Y’see, Timmy, complete books are what agents represent and publishers buy. Not most of a book. Not 83% of a book but all the character arcs are right over there on a website I set up. If I’m submitting to an agent or an editor—especially as a first time writer—I need to have a coherent, contained manuscript. If this playlist is necessary to understand something in the book, then it needs to be part of the book.

And if I don’t need it... then it’s probably a marketing tool. Nothing wrong with that, but it means nobody needs to see it until after the book’s found a home somewhere. Maybe not for a while after that, even. Even for an agent, that’s real cart-before-the-horse stuff.  I’m talking about wedding venues and they haven’t even decided if they want to go on a first date.

“But... I mean, come on. Won’t they be glad to know I have a plan to market the book? It has to improve my odds a little!”

Look, think about it this way. A publisher’s either going to have their own plan to market the book (one thought up by their marketing and publicity people), in which case my plan’s very likely irrelevant to them. Or they’re going to be expecting me to take care of all the marketing and publicity myself, in which case it’s still irrelevant to them because I’d be doing it no matter what. 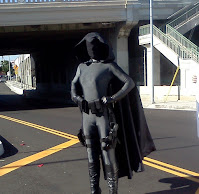 And I feel like I’m babbling now. So to end on a slightly happier note... here’s a picture of my friend Tammy dressed as Stealth for those book trailers I mentioned, They’re still up on YouTube if you go look.

Oh, also--this Sunday at 5:00 (Pacific) I'm doing an online interview with my friend Elena Taylor, talking about writing and publishing and whatever else you might have to ask. It's completely free and open to everyone, just sign up to reserve a space and have your questions at the ready.

Next time, I may have a little worldbuilding tip for you. Or maybe I’ll be answering another question. Only one way to find out...