Does that title sound a little too familiar?
Maybe we should talk about that...
A few months back I read a book that I couldn’t figure out.  It left me completely baffled.  I’m not talking about the plot (granted, I was having trouble with that, too), but the setting.
I honestly couldn’t figure out the world.  At times, it seemed like it was the modern world that we all know and love—granted, with some sci-fi/ fantasy stuff going on in the background.  At other times, it seemed to be a sort of alternate history, post-apocalyptic “present.”  It didn’t help that every character was somehow tied directly into that sci-fi/ fantasy thread, because for all of them this was the “normal” world and they didn’t notice anything different about it.
Why does this matter?
Well, knowing where a story is set helps me, as a reader, to set my expectations and reactions.  It lets me get a sense of what’s possible, or what might be possible.  The setting is an automatic set of guidelines for the reader, for the characters, and for the writer, too.
For example...
A few years back I read an absolutely wonderful essay on Scooby-Doo and secular humanism.  No seriously.  You can read the whole thing here.  The writer made a very interesting point that shows why it’s so key to know what kind of world my story is set in.  He uses it as one link in a larger chain of logic, but for our purposes we can examine it alone. 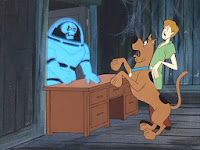 In all the classic Scooby-Doo episodes, the supernatural threat is always revealed to be a fake.  It’s someone in a costume (probably Carl the stuntman or Mr. Bascombe) using special effects of one kind or another for an ulterior motive.  It has to be, because in the world of classic Scooby Doo, ghosts and monsters aren’t real.  That’s why it makes sense for Velma, Fred, and Daphne to act rationally and why it’s funny when Shaggy and Scooby get scared and run away—they’re scared of the fake monsters.
But...
If the supernatural is real (as it is in some of those later stories), suddenly everything shifts.  The rules of the world have changed, so we have to look at the characters in a new light.  Now Velma and the others are foolish for trying to apply logic to inherently illogical creatures and for exposing themselves to life-threatening monsters like werewolves and vampires.  Not only that, Shaggy and Scooby are now the smart ones, because being scared of vampires is a perfectly rational response in a world where vampires are real.
Here’s another one.
I recently read a piece by one of the editors at Marvel comics.  He proudly spoke about how their stories are set in “the real world.”  The characters, their reactions, the world around them...
And I have to admit, my first thought was... what a bunch of nonsense.
(I may not have used the word nonsense.  I tend to be a bit more emphatic with my internal dialogue...)

Let’s consider a few details about the Marvel Comics universe.  It is commonly known that some people can fly.  It’s not exactly secret that magic is real and aliens exist.  Super-powered human mutants are also real and receive tons of media attention.  There’s a large, tropical valley in Antarctica where dinosaurs still live, visible on Google Earth and written about in several textbooks.  Energy weapons are commonplace, as is high-tech battle armor.  There are numerous publicly-known artificial intelligences in the world.  Standing next to detonating atomic weapons can give you superpowers.  Hell, in the Marvel Universe, you can jump off the Empire State Building and there’s actually a halfway decent chance someone will catch you on the way down.
Does this sound remotely like the real world?
Would the people of this world have the same expectations you and I do?  Would they think and react to things the same way?  I live in LA, and when I hear a faint rumble and the building shakes, I normally check Facebook to see if anyone else felt an earthquake.  In the Marvel Universe, I’d probably assume it was superheroes battling a giant monster.  If I got a headache, I’d be checking to see if it was telekinesis or some form of optic blasts.  And then take aspirin.  And then check for telekinesis again, just in case it interacts with drugs somehow. And the thing is, these would be perfectly rational reactions in the Marvel Universe.
Now, one more example.  Harry Potter.  In this world there are wizards, giants, dragons, hippogriffs, goblin bankers, house-elves, gnomes, and much, much more (no aliens, though).  But the thing is, it all exists kind of... off to the side.  The average person in the world of Harry Potter has never heard of Hogwarts and can’t find Diagon Alley.  The magical world rarely overlaps with the mundane one, and we learn there are whole government departments charged with making sure they stay separate.  The real world for them is the real world we all know about, one where there’s no such thing as magic.
Starting to make sense?  If I can’t define my world, I can’t define what is and isn’t possible.  I can’t have characters react appropriately if I don’t know what would be appropriate.
On the flipside, there’s a period show on right now that kind of gnaws at me.  Mostly because it’s set in Victorian London and one of the supporting characters never wears a hat... but also because of the setting.  The main plot revolves around our protagonist attempting to perfect wireless, broadcasted electricity, something Tesla worked on for decades.  Our hero hopes to destroy the fortunes of a group of wealthy oilmen by rendering their investments worthless. 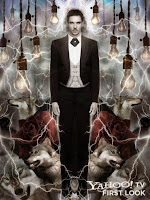 Now, here’s the thing.  We know broadcast power wasn’t invented at the turn of the last century, so if the show ends with our hero succeeding, it means the whole story’s been set in an alternate history.  But if his broadcast power fails, it implies the story’s set in the real world.  But until one or the other happens, I can’t tell you the setting.
Of course some of you may know what program I’m talking about and I’m sure you’re going to bring up the larger point—the vampires.  But here’s the interesting point.  The vampires are irrelevant.  Much like Hogwarts and Diagon Alley, no one knows the vampires exist.
But the broadcast power... that’s in the news.  There were press releases and huge parties.  Broadcast power changes everything.  That’s a world where, from the beginning of the electrical age, nothing needs batteries or wall outlets.  There are countless changes and repercussions if broadcast power is real.
Y’see, Timmy, my fantastic story can still be set in the real world provided the events of my story don’t change the world.  I mean, within the world of the show only a handful of people in London know vampires are real.  It’s not public knowledge.  And today in the modern world we’ve never heard of or seen evidence of vampires in the Victorian era, so that part of the story has an aura of truth and reality to it.
If you want to set an amazing story in the real world, you need to use conspiracy theory logic.    I’ve used this analogy before, and bizarre as it may sound it works.  Yep, the same reasoning used by moon-landing deniers, “9-11 was staged” folks, and the birthers is what makes for a good fiction story. No irony there...
By conspiracy-theory logic, any facts that disprove XYZ are an attempt to hide the truth, thus further proving XYZ is true.  The very lack of evidence is the proof that it’s true.  And if I stumble across a few coincidences that imply XYZ might be true, well, that’s just more evidence XYZ is true.
Didn’t I just describe the world of Harry Potter?
The vampires hide all trace of their existence.  There is no evidence that vampires exist.  Ipso facto (fancy Latin words) my story rings true because it lines up with all known facts.  Follow me?
The world of my story has to have its own consistent logic.  Because if I don’t know my world, I can’t know how characters in my world react to things.  And if I don’t know my characters, well... that’s it.
Next time... well, is there any topic anyone would like covered?  I can probably ramble on about most anything (as this post shows).  Let me know in the comments if there’s something you’d like me to babble about.
And if no one does, I’ll come up with something worthwhile.
Until then, go write.