This IS Ceti Alpha Five!

If you get that title reference, you probably feel an equal mix of pride and shame. Just like I do for coming up with it.

Silly as it may sound, a key part of storytelling is knowing the world your story is set in. I can tell the story of a noble knight on a quest to find the Holy Grail, but depending on the world I set it in, he can be a glorious hero (The Once and Future King) or a deranged madman (The Fisher King). We’d all frown if one of the Bourne books had him stopping an alien invasion and we’d shake our heads if Jack Reacher took on a cult of Satanists that had summoned an actual demon.

One of the biggest ways writers mess this up is to take too long to establish what kind of world they’re in. For example, they’re doing a spoof-comedy, but the first thirty pages have been completely straight. Or (on the flipside) they do establish the world and much later in the narrative try to switch that world to something else. I’ll blab on about that in a minute.

Predator begins with the team landing in Central America and getting briefed on their mission. They head into the jungle, locate the crashed plane, find the enemy camp, and have an awesome gunfight. Then Arnold discovers that Carl set them up and dumped them in the meat grinder. They head back out for the rendezvous... and that’s when they discover there’s something else in the jungle.

We’re, what... half an hour into the film at this point?

Except... that’s not how Predator begins. If you think back, the movie actually begins with an alien spaceship flying past Earth and launching off a small shuttle/ drop pod. We’re told in the first minute of the film that this is, ultimately, a sci-fi story. We may get distracted for a bit by the hail of bullets, but when the title alien shows up it isn’t a surprise... just a bit creepy.

On the other hand, one recent book I read was 100% set in the real world. Everything about it was realistic. The basic idea was two people who had found the last notebook of a dead research scientist who claimed (in his notes) to have discovered a cure for cancer. The cure for cancer. The entire book was about them trying to figure out what the heck they had while half a dozen pharmaceutical companies chased them—all wanting the notebook one way or another. Well, in the end they escape big pharma, sell the notebook to a group of researchers for a couple million dollars, and cancer is cured across the globe.

Yep. We cured cancer everywhere in the last seven pages. Go us.

I also once saw a script that started out as a dramatic comedy sort of thing. Young woman, single mother, trying to make the best of life even though she keeps getting knocked down... we’ve all seen it a few dozen times. That was the first forty odd pages. Then, on page 44, if memory serves (almost 3/4 of an hour into the movie, mind you), we discover that the old man she just helped cross the street is actually the Easter Bunny, who decides to reward the woman with a wish for her random act of Christian charity.

Like any other disruption in the flow of a story, it’s very jarring when a story is set up in one world and then veers off into another one. It’s like discovering that one of your main characters has actually been insane all along. It forces the reader to re-examine what’s come before, and not in a good way. In fact, more often than not, these sudden shifts in tone and world force a story into pure comedy. Again, not in a good way.

Consider this. There’s a classic Saturday Night Live skit which claims to be the famous “lost reel” of It’s A Wonderful Life. In this, just as everyone’s sitting around singing and rejoicing, Uncle Billy remembers that he misplaced the money in the newspaper Mr. Potter took. It only takes a few moments for this realization to turn the celebrating friends and family into an ugly mob, and they march to Potter’s house, give the man a mass beating, and burn his home to the ground. The End. The Simpsons did something similar with a lost final reel of Casablanca. Here Ilsa parachutes out of Laszlo’s plane to be with Rick, saving him from (and killing) Adolph Hitler in the process. The happy couple is married shortly afterwards. The End...?

No, seriously. That’s how they “ended” Casablanca, with the ellipse and the question mark. Which, as Bart points out, leaves them open for a sequel.

So just by (hypothetically) shifting the tone/world of the endings, both of these classic, award-winning films become absurdist comedies.

Now here’s a key thing to remember. You can still have a fantastic story set in the real world provided the events of your story don’t change the world. If I wage a secret battle against lizard men from the center of the Earth and at the end of my story no one knows the war happened, then the world hasn’t changed, has it?

Perfect example—Raiders of the Lost Ark. Not only does this story involve a Nazi plot to seize arcane objects across the globe, it has reputable archeologist Henry “Indiana” Jones finding hardcore evidence that God is real. Think about the repercussions that information would have. If someone went public in the 1930s with absolute, undeniable proof of God’s existence, what kind of world would we be living in today? What kind of story would you be telling? 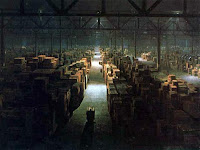 Which is why that evidence never goes public. We’re left with the distinct impression no more than a dozen people know what Dr. Jones recovered from that island, and that he’s been well-paid not to talk about it. And the Ark... well, we all know what happens to the Ark, don’t we?

I really, really hate to use this analogy, but it is perfect. If you want to set an amazing story in the real world, you need to use conspiracy theory logic. Yep, the same reasoning used by the birthers, moon-landing deniers, and “9-11 was staged” folks is what makes for a good fiction story. How sad is that?

Y’see, Timmy, by this chain of reasoning, the untouched real world is undeniable proof the imaginary world of your story is true. Only the BPRD knows what really happened to Adolph Hitler after the Occult Wars, so it’s understandable that most of us only know the publicized version of events. There are a dozen enchantments that keep the magical world of Hogwarts and Diagon Alley separate from the real world, thus the fact that no Muggle has ever seen Hogwarts pushes the idea that the stories about it are true. Only a worthy mortal can lift the hammer of Thor (bonus points if you remember its name—offer not good after Friday), but we all know we’re not 100% worthy so we accept that we’ve never had the chance to lift it. The fantasy world doesn’t change the real world, so that fantasy world is more believable.

So do amazing things in amazing worlds. Just make sure no one finds out about it.

Next time, I wanted to rant a bit about sounding like a professional.