There’s an aphorism about writing I heard a while back—“get your character up a tree and throw rocks at them.” It’s one of those fun, quick statements with a lot of truth behind it. A complex idea boiled down to something simple.

There’s another one, part of Pixar’s rules of storytelling. “Coincidences to get characters into trouble are great; coincidences to get them out of it are cheating.”  Because we’ve all seen that, right? The character who randomly finds the exact thing they need just when they need it.

Put these two together and my character’s picked the worst tree to climb up. Because it turns out that’s the rock-throwing tree! Since our town was founded, people have always thrown rocks up at that thing. The local little league uses that specific tree for pitching practice. Young couples throw rocks at that tree to see if they’ll live happily ever after. And they say if you throw rocks at it under a new moon, you can speak to a lost love one final time.

Okay, maybe going a bit overboard there. It’s kind of silly to believe this one tree has so many legends and habits and traditions of rock-throwing associated with it, right? Especially because some of them, you’ve got to wonder... why? How the heck did this become a thing? Why would all these people one day choose to throw rocks at this tree?

Which is what I wanted to talk about.

We’ve talked about the need for conflict before. If there’s no conflict—or an utterly minor, negligible conflict—I can’t have much of a plot. And without a plot, my characters are just kinda standing around without any. So this idea of throwing stones—of putting lots of obstacles between my character and their goal—is a solid one. We want our characters to have something to do, and we don’t want it to be easy for them to do it.

Kind of like with the rock-throwing tree, we need to feel like there’s a reason behind this. If our character was stuck up in a tree and people just happened to randomly decide “hey, let’s throw rocks at that!”... we’d probably call foul. It’s just not terribly believable. 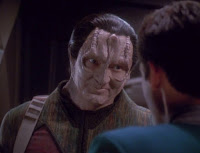 Okay, it might be believable once. Our minds will give a little leeway (especially in fiction) for a single bizarre coincidence. To quote the esteemed philosopher Elim Garak, however... I believe in coincidence. Coincidences happen every day. But I don't trust  coincidences.

If I’m going to have a lot of rocks thrown at my character, I need some solid, in-story reason why they’re being thrown. Because after my characters lose their keys or forget the password or drop the flash drive or run into a third mugger... well, it starts to look less like coincidence and more like weak writing.

Because even coincidences have a reason behind them. Why this person showed up early. Why that battery isn’t charged. Why Dot forgot to bring the incredibly important goober that this entire mission hinges on.

Get your character up that tree and throw stones at them. Throw boulders at them. And handfuls of loose gravel. But know, within the story, why they’re all getting thrown. Is there a real reason for it?

Or is the only person the reader sees throwing stones... me?

In other news, in case you missed it, the A2Q now has a table of contents, so you can find all of it quick and easy. Also, with everything going on in the world I made my usual Black Friday offer a little early this year, so if you’re someone who could use it, please get in touch with me.

Next time here on the ranty blog...

Holy crap, it’s Thanksgiving. How is this year moving so slow and so fast at the same time? The barriers have been shattered! All time is existing at once!

Seriously, though, unless someone’s got a specific, pressing question I’ll probably take the day off and maybe throw some Cyber-Monday gift ideas at you. And next time I’ll talk about binding agreements...

And throw some stones.