Not THAT Kind of Action...

How’s everyone’s week been? Anything interesting going on in the world?

Today I’d like to dissect one of those chestnuts of bad advice that keeps floating around the internet and showing up in different writing-related groups. Well, it’s not so much bad as really misunderstood. Which is what happens when a lot of these things get distilled down to quick little buzzphrases instead of, y’know... explained.

The advice in question is start with action. I’m sure you’ve heard it once or thrice before. I’ve mentioned it here a couple of times and why it isn’t the best rule to follow.

Because starting my story with action doesn’t mean explosions and automatic weapons firing.  We don’t need to have dinosaurs in mech suits fighting vampire kaiju while SEAL team sixteen  (the best of the best of the best) blows up the to take out the ninja lizard men trying to steal the Declaration of Independence. No boxing matches, no car chases, none of whatever other type of wild action scene might grab the reader immediately. 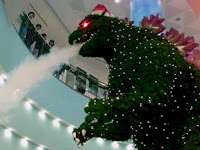 Just to be clear, there’s nothing inherently wrong with any of those things. But it should be clear there’s a lot of genres they won’t work in (although I do think a lot of Hallmark’s Christmas rom-coms could be improved by introducing kaiju). Heck, even in genres where this kind of high energy intro could work, they might not fit in the particular story I’m telling.

Trying to force these high-action openings into every story is the misunderstanding I mentioned up above. It makes for a lot of clumsy openings that often don’t match up with the tone or plot of the actual narrative. When we say a story should start with action, what we’re really saying is that characters should be active from the beginning. A story should start with something happening.

I’ve had a few people point out to me (with a few different tones to their voices) that lots of things count as something happening. Right now I’m typing. And pausing to re-read a bit as I go. And digesting lunch. And breathing. I mean, technically, sleeping is me “doing something.” So is walking from room to room. Taking a shower. Lying in bed staring at the ceiling, deep in thought. Yeah, those are all actions, no question. But none of these make for really compelling openings. They’re not exactly what I’d use to kick off a book.

So we don’t need to begin with gigantic, all-caps ACTION, but we also don’t want to begin with a light breeze making a few strands of my character’s hair drift side to side while she naps.

I’ve been trying to think of a simple way to explain this better, that level of action that falls between explosions and mundane. And the other day I came up with what I think is a pretty solid one. With two small provisos.

So here’s your new rule to replace start with action.

Wakko finding out he’s got a flat tire when he’s heading into work is a change to his life—it’s going to affect his whole day. Same with Dot spilling her coffee and having to stop and clean it up. Phoebe finding out her ex thought she was “comfortably dull” (yes, no matter what they were doing) is going to change her life. And to use an example I’ve mentioned before, Sam Wilson realizing the guy he’s trying to run laps against is Captain is definitely going to make some ripples in his life. 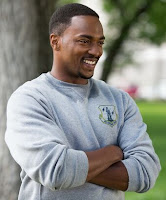 Keep in mind—the big change in Sam’s life comes much later, when Steve and Natasha show up at his place looking for a place to hide and learn Sam has some skills of his own. But the action of that opening scene... Sam’s just met an actual living legend and had a moment of bonding over their experience as returning combat vets. If nothing else ever happened, if Sam and Steve never saw each other again, we still know this moment would’ve had some affect on Sam, for the rest of that day if nothing else.

Okay, here are my two little additions/provisos to this rule.

One is that this life changing event doesn’t need to be connected to my main plot in any way. Or even a subplot. It can be, sure, but it doesn’t have to be. It's more about giving us a first impression of the character. Wakko’s flat tire doesn’t need to lead to the bigger overall story. The opinions of Phoebe’s ex don’t have to tie into a larger arc about relationships. And honestly, if you snipped that morning jog scene off The Winter Soldier and just began with Cap rescuing the ship at sea... what would really change, plot-wise?

Two is a little trickier, but... it’s definitely worth keeping in mind. I’ve blathered on a couple times about the idea that characters should be used to things in their world. To the point that what would be amazing to us might be almost boring to them. With that in mind, I can start with something that might not be life-changing for the character as long as it would definitely be for the reader. Taking a gravity elevator-shuttle to the Moon is normal for and Kurt, maybe even boring, but we can still appreciate the idea of kids bouncing around the cabin as people glide through the aisles and over seats. It’s nothing to them, but it’s something to us.

And one more time, just to be clear, there’s nothing wrong with explosions, car chases, and vampire kaiju. There’s absolutely nothing wrong with dinosaurs in mech suits. But these big action pieces need to work with my story as a whole. They shouldn’t be something I just wrestled into place so I can say my story starts with action.

Look at the opening of your book. Does it change somebody’s life? Because that’s the big goal here, right...?

Next time, I’d like to hit you with a rock.