I do this every year, but I figured with everything going on in 2020 some folks might need some good news a little early. Plus, with the way the post office is going... well, I figured giving everyone an extra two weeks wouldn’t be bad, either.

That said, I’d like to take this almost-holiday Friday the thirteenth to offer you a little hope. With some depressing facts as a lead-in.

If you’re new to the ranty blog or to me and my writing in general, you may not know that I had a prolonged bout of poverty during my path to becoming a writer. I’d been doing okay in the film industry, and then was doing okay as a freelance journalist, but when the economy crumbled in 2008, the magazine I did most of my writing for started to flounder. Within two years lagging paychecks and a few fairly mundane surprise expenses (car repairs, a sick cat, a lost filling) had emptied my savings and maxed out my credit cards. 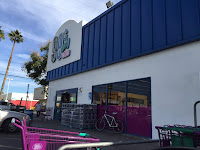 And to be clear, I mean, nothing. My partner and I lived right at the poverty line from 2009 till about mid-2012. In . We shopped pretty much exclusively at the 99¢ Store. Our phone got shut off. We had no internet at home, so we used the library’s wifi for everything, and while we were there we’d “borrow” a roll or three of toilet paper, tucked away in our bags. We didn’t turn the heat on for two winters in a row. I missed out on potential work (and meeting some legends) because I couldn’t afford gas anywhere (which didn’t help things). Hell, for one assignment I had to beg one of my editors to loan me gas money so I could drive to a screening.

Especially at the holidays.

And you feel guilty about it. You spend time stressing about if maybe there was something else you could’ve done. About the people you love who you feel like you’re neglecting. About what people think about you, being so poor you can’t even get something for your significant other or your family.

It’s that feeling all the time. Pretty much from mid-November to mid January. Guilt and dread and shame and self-doubt. Yay! Why don’t we ever hear that holiday song?

Being poor at the holidays absolutely sucks. Believe me, I know. The past seven years have been good to me, but I still get that twist deep in my gut when the credit card reader makes the angry buzz instead of a beep.

All that said... these days I’m in a better position, and I owe a good part of that to all of you. Because for some reason you like these odd stories I tell. And if I can help some of you avoid feeling miserable this holiday season, I’d like to do it.

So here’s the deal. If you’re in that bad place right now, where you can’t afford to give gifts to your family or friends, shoot me a note at my old PeterClines101@yahoo.com address. I’ve still got fifteen or sixteen random books saved from last year (when nobody took me up on this), and I might be able to scrounge up two or three more if need be. I’ll scribble in one and mail it out to you (postage is on me, too). I’ll even throw in wrapping paper if you need it. If you know your gift-target would like a specific book, feel free toask, but I can’t promise anything, sorry (I have what I have). I’ll send them out for as long as the books last.

It’s not much, I know. But it’ll be a gift you can give someone. And maybe you can feel a little less stressed at the holidays.

Again, this is for those of you who need some help getting gifts for others. The people pulling unemployment (or not!), cutting back on everything, and feeling like crap because they can’t afford holiday gifts for family or friends.  It’s not so you can recommend someone in a bad spot who might like a book. You could do that for them—go buy them a book. And buy locally! Support your local bookstores! And comic shops! And toy stores! And state that could flip the Senate (a gift that will keep on giving).

I’m also doing this on the honor system, so if you’re just trying to save some cash or score an autographed book... I won’t be able to stop you. Just know you’re a truly selfish, deplorable person and you’re taking away what might’ve been someone’s only bright moment this season. And Krampus will probably feed you to a squale.