What’s In Your Arsenal?

Y’know, while I was pulling links for this post, I realized something kind of amazing (and I’m glad I caught it).  This is the 300th time I’ve posted on this page.  Three hundred ranty posts about characters and dialogue and spelling and structure. Wow.
I’m kind of surprised we’re all still here.
But let’s get back to it...
Odd fact—I’ve probably fired more types of handguns and rifles than anyone reading this.  You might be a firearm enthusiast, you might be former military, you might be in the military now... but there’s a very good chance I’ve got you beat.  I once compared notes with an Army weapons specialist and it turned out I could name almost twice as many firearms than him that I’d used, including a few obscure ones he’d never even heard of.
The reason why I can do this is all my time in the film industry.  With the different procedural and crime shows I worked on, it was very common to have a new murder weapon every week, along with a red herring weapon and possibly some random thug weapons as well. Pistols, shotguns, rifles, bolt action, lever action, pump, semi-auto, full-auto...  And every one of these that was actually used on screen had to be test fired by me and then by the actors.
Even with some common weapons repeating, over the course of fifteen years... I fired a lot of weapons.

Now, with all that being said, even though I’ve worked with a ton of weapons, I would never consider myself any kind of marksman.  Definitely not a sniper.  Because there is much, much more to being good with weapons then just being able to pull a trigger.  An AK-47 might seem like a ticket to badass-dom, but not if I don’t know how to load it. Or hold it.  Or turn the safety off.  I’ve heard some great (and kind of awful) stories from soldiers about gunfights with people who don’t know how their own weapons work.
I bet a few folks reading this have an acquaintance who buys nothing but the most expensive, top-of-the-line tools yet still can’t put an IKEA bookshelf together.  Most of us have heard stories about some guy who spends a quarter-million on a car and then wrecks it within a week because “the car outperformed the driver.” Heck, we’ve all seen proof that giving a director access to grade-A actors and millions in film technology is absolutely no guarantee of a decent movie.
Y’see, Timmy, having high-level tools doesn’t automatically make me skilled.  They’re two entirely different things.  Sure, I can keep jabbing at that bookshelf with my $300 DeWalt Max XR  20 volt hammer drill, but if I just need to tap in a few finishing nails it’s not going to help much. And the parts the drill would actually work for... well, a Phillips head screwdriver would do the same job.  It might even work better, all things considered.  DeWalt’s are great, but they can kind of suck when you need to work in tight spaces.
Anyway... where am I going with this?
I’d like to share something with you.  As I’ve mentioned once or thrice before, I used to work on a text-based online game, what some of you might know as a MUD.  Because it was text-dependent, it was a chance for some people to really show off their skills.  Or complete lack thereof.  A friend of mine still works there and sometimes she shares things with me.
So, check out this sentence...
(names have been changed to protect the horribly guilty)

"Lashes aflutter like the wings of a satin bird, Phoebe sets glaukosphaerite lagoons on the newcomer, a smirk glissading across twin folds."

WTF...
Now, I was going to try to sift through this sentence and break down all the places it went wrong.  To be honest, I did.  And I had a page and a half of notes, which is a lot more negativity than I want to have here.  So, instead, let me break all of that down into four simple rules for your writing arsenal.
And yes, these would be rules, not advice.

Know what words mean—It doesn’t matter how much my reciprocal saw cost if I keep trying to use it as a butter knife.  An elephant gun is not a sidearm.  And diffuse and defuse mean two entirely different things.
This is the most important of these rules.  If I want to make my living with words, I need to know them intimately.   Not more or less what they mean or a general idea of how they’re used.  I cannot say words are the tools of my trade and then get repeatedly stumped by vocabulary questions on Jeopardy!. I’ve been doing this for many years, full time for over eight now, and I still pick up the dictionary once or thrice a week to make sure I’m using a given word correctly.  Because I have to know what they mean.
This is also one of the worst rules to get wrong because it’s a mistake that’s hard to catch.  I won’t catch it because, well, I don’t know I’m using the word wrong.  My computer won’t catch it, because computers are idiots and will only tell me if a word’s spelled right, not if it’s being used correctly. Which means the readers will probably be the ones to catch it... and it won’t give them a good opinion of my skills as a writer.
Don’t overcomplicate—Stephen King once said that any word you go looking for in the thesaurus for is the wrong word.  I’ve mentioned a few different versions of this rule at one time or another.  I’m not saying my writing can’t have some clever bits to it, but I should never confuse (or equate) overcomplicating my writing with complexity in my writing.
If I have metaphors for metaphors (like using lagoons instead of pools because I don’t want to use eyes), I am pushing my audience away from reading and into analysis.  This is the kind of thing that destroys the flow of my writing.  And that’s the kind of thing that gets my writing set aside in favor of something else.

Know how things go together—Remember that AK-47?  It’s not going to be half as effective after I force a lot of shotgun shells into the magazine.  They’re two powerful items that do not work well together. 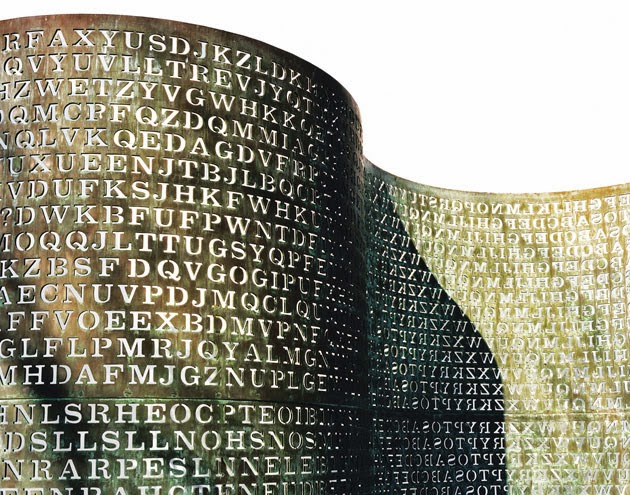 People can’t read my sentences if they don’t understand my sentences.  That "descriptive"sentence up above arguably has five completely different similes and metaphors. It’s spinning in multiple directions. This is when things go past overcomplicated and into full-on incomprehensible.  I need to have a firm understanding of the individual parts, how they'll be perceived, and how they'll work as a whole.

Know what words mean—Did I mention this one already? Well, it’s probably worth mentioning again.  It is the most important of these rules after all.  And the one most people will ignore, because I need to be able to admit I don’t know stuff before I can learn new stuff.

Have a big arsenal of words because you need it and you can use it.  Not just because you think it makes you look cool.  I can spend twenty minutes looking up glaukosphaerite and making sure it’s spelled correctly (because it won’t be in the spellchecker), but I could also just use green and then finish this whole page in that same amount of time.
And more people would understand what I was trying to say.
Next time, I wanted to tell you about something I’ve felt for a while now...
Until then, go write.