I had a post on dating apps all ready to go but... well, the past two weeks have been especially rough for me. On a bunch of fronts. I’m still here at the desk, though. Scribbling away. Being pretty productive, honestly, even though I’d really rather just be drinking, building toy robots, and listening to Lore again from the beginning.

Which got me thinking. The past few years—2020 especially—has been tough on creative folks. It’s been crisis after crisis, and it’s been exhausting on so many levels. Spiritually. Emotionally. Even physically. I don’t know about you, but I feel seriously beat up after 2020. 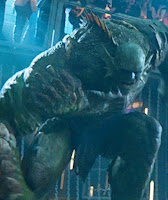 And when you’re already that beat up, every new wound hits that much harder. Bad news is the worst news. Any little bit of criticism is a knife in the back. Self-doubt can swell up into this Hulk-like manifestation of your childhood bully to make everything even worse. Or I guess Abomination-like is more trendy right now. You get the point. It’s friggin’ huge.

Not surprising at times like these, we all feel the urge to walk away for a while. To take a mental health day or three. The desire to put this project down and come back to it when we’re feeling a little less beat up and a little more inspired. Maybe to just spend today—and maybe tomorrow—comfortably playing games on the couch and not thinking about anything.

Because holy crap, there’s a ton of stuff it’d be nice not to think about, isn’t there?

All that said, I just want to warn against something that becomes really tempting at times like these. And that’s waiting for something to make me want to write again. Waiting until the muse pushes me, until I feel inspired again.

Yeah, okay, we all write for different reasons. It might be more of a hobby. It might be therapeutic. But I’m guessing for most of the folks reading this, the hope is to someday make a steady living at it. Financially speaking.

And if I’m one of these folks, I need to accept that writing is work. Most of the time it’s fantastic and fun and creative, but sometimes I need to do it even when I don’t feel like it. Sometimes I need to do it when I don’t want to. I just need to get in there and write another thousand words about this guy going down into a haunted mine. Or that woman trying to find out the secrets her parents hid from her. Or those college students on that boat trip that went... well, less than great.

I’m not saying I need to work twelve hours a day, seven days a week. Neither do you, if I wasn’t clear. It’s 100% understandable to need a vacation or just a mental health day. Real life is out there with vet appointments and grocery shopping and maybe even another human or two we kinda enjoy spending time with. No job should be my whole existence, no matter what it is. And like I said above, it’s a rough time in a rough world. We all need to take care of ourselves and the people we care about.

But also... we need to be sure we’re not using all that roughness as an excuse.

Y’see Timmy, at the end of the day, I should want to write. I should enjoy it. Yeah, some days are less enjoyable than others, like any job, but it shouldn’t be the thing I put off for the third week in a row because I’m just not feeling it. I can’t put things off waiting for the perfect inspiration or a certain mood or a precise atmosphere. If wanting to write isn’t my default state, if the thought of it makes me miserable...

Maybe that’s my brain telling me something.

Anyway, just some random thoughts. Next time, we’ll talk about getting the most out of those dating apps.