My Chronicle of the Plague Months

I finished up the A2Q last week, and for a brief moment I had no idea what I would blather on about this time. Seriously, a complete blank. There’s just so much crap going on in the world right now (as I talked about a few weeks ago) and I was stressing a bit over my own manuscript that I’m working on right now (the non-werewolf one).

So I thought I might talk a little bit about that. The stress and the non-werewolf manuscript. Because maybe you’re stressing about the same thing. Or something closely related. Probably not the fact that your work in progress doesn't have any werewolves. That's a much bigger problem you'll have to deal with on your own.

My new book opens in a bar. The first three chapters are set there (granted, I write kinda short chapters compared to most people). And as I’m heading toward the end of this draft and getting ready to loop around for another look, I’m kinda dreading those chapters.

I mean... is a bar even normal anymore? It was when I started this, but now it feels a little weird. What’s going to be “normal” when my agent and editor see this in a month or two? Do these dozen or so bar patrons—does the whole vibe of the bar—come across differently now? Should they be wearing masks? Should the bartender have gloves? And what does it mean if I write them not wearing masks of gloves. How will people see the book? Hell, how will people see me? I mean, for some idiot reason wearing/not wearing a mask during a pandemic has become a political statement.

How much of the real world should I be incorporating into my writing? I mean, a lot of really smart people are saying things can’t go back to the way they were. Do readers and editors want to see the world that is? The world that was? Should I be incorporating masks and social distancing and hell is the romance angle in this totally stupid now? Can two people have a random meet-cute in a world where most people don’t go anywhere casually? Are people still hooking up in the plague years, or is this scene going to come across as less sexy and more incredibly risky?

If you’re having these kinda thoughts well... join the club. It makes sense, after all. It shows you have a good level of empathy, that you’re thinking about these things and how they’ll be seen by other people.

But thinking about them doesn’t answer the big question. What should we do? How should we—or should we—be altering things in our work to match the world better?

I think what we’re all experiencing right now is a kind of common problem, it’s just rare for all of us to be going through it at the same time, and on this scale. We’re trying to write for the future. We’re trying to guess what readers and agents and editors are going to want to see in nine or ten months.

To some extent, this is always an issue. There are people who find themselves writing political thrillers during major elections. Folks have written books about cutting-edge technology that’s obsolete by the time anyone gets to read it. If you’re a Lee Child fan, you may have heard the story of how a change in the way currency was designed and printed made the entire twist of his first Jack Reacher novel, The Killing Floor, completely impossible. I wrote a book about the American Dream in late 2015/early 2016, and by the time it came out parts of it looked almost foolishly optimistic. These things happen. The world keeps progressing.


Hell, even more hardcore genre books can have this problem. How many sci-fi books and movies are set in a future that we’ve already reached and passed? 2001: A Space Odyssey and its sequel 2010? Back to the Future? Thundarr the Barbarian? A ton of Star Trek? All of these stories involved “future” events and well... we know those futures didn’t happen.

Y’see Timmy, we can’t predict the future. Even the relatively near future. And our readers and editors know this. Things will always happen that might make some part of my book obsolete or impossible. If it doesn’t happen in the process of writing it, it’ll definitely happen at some point. It's inevitable.

I will toss out two small addendums to this.

First, the easy one. If this really gnaws at you, maybe you could incorporate some “current” elements at a lesser level. I mean, here in southern it wasn’t exactly rare to see people wearing masks, especially during flu season or some outbreak. Heck, if you’ve been at an airport any time in the past few years, I’m sure you’ve seen people wearing them there. So it’s not like it would be unnatural to mention masks on a few people, or someone keeping that one alligator-length away from other folks.

Addendum the second. I’ve mentioned once or thrice there are some writers who seriously excel at pumping out really fast, very topical books. It’s a really specific type of market and you need to be a very specific type of writer to do well in it. 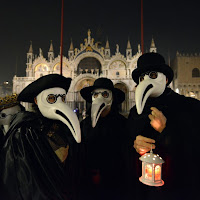 I bring it up because I guarantee you these folks have already written the lockdown murder mystery novel, the “have to venture out during quarantine” novel, the “falling in love over Zoom” novel, the “lost soul finds new purpose handmaking masks” novel, the “unfeeling businessman learns the real meaning of life after a beloved person dies of covid-19” novel, and probably far to many “brave reporter uncovers the real conspiracy behind the lockdowns” novels. Wow, that was a hell of a run on sentence. If Ray Porter narrated my blog, he would smack me upside the head for that one.

My point is, unless I’ve already finished it, I should probably hold off on something that ties directly to current events. There’s a really good chance a lot of writers already beat me to it (in the sense that their novel’s already done). Which means there’s a really good chance agents and editors are already swamped with these brilliant, high-concept ideas that I just thought up off the top of my head and all of you could immediately picture. Even if I go the self pub-route, odds are these other writers have already sewn up that market. Or bled it dry. Maybe both. Whichever of those works best for you.

But my big point still stands. For now, try not to worry too much about this. Make sure your book works overall, that all the big beats work before fretting over small details. Even if some aspect of the world means my book is now 100% impossible, it can still be looked at as a story of the world that was, and it’ll still need to be the best book I can make it.

Anyway... that’s my semi-inspirational, reassuring ramble for this week. Hopefully it helped a few of you. It actually calmed be a bit just writing it out.

Next time... I don’t know. After three months working on the A2Q, I feel a little lost. Is there a particular topic anyone would like me to address and blather on about? Something from the A2Q I could clarify? Just a random question that’s been bugging you? Let me know down below.

And if nobody has anything... well, I’m sure I’ll come up with something exciting.