Well, it’s that time of year again.  Time to cue up that playlist of holiday music and pick out your stack of favorite movies.  Maybe you go a little more unconventional with your choices, maybe you stick to the classics, but whatever your flavor is, I’m sure there’s a lot of them. 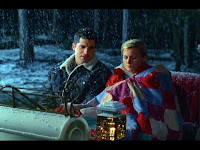 Hell, holiday movies are pretty much a solid, dependable genre at this point.  Just between Hallmark and Netflix, I think there’s forty or fifty new ones just for this year alone.  I worked on years ago and it still gets heavy circulation.  People go nuts about the “plague” of superhero movies, but seriously—Christmas movies are the real machine.
Anyway...
We laugh at a lot of these and roll our eyes because they often feature some kind of painful romance.  And that’s what I wanted to talk about.  Where that awkwardness comes from and why these stories kinda keeps us at arms length rather than pulling us in.
The standard Christmas movie goes something like this.  A young woman (it’s almost always a woman) falls for a guy who’s a few weeks away from getting engaged, married, etc.  The two of them have chemistry, while his girlfriend/ fiancé rages away at her job or as a larval Bridezilla or maybe just as a generally awful, awful person.  Eventually the guy comes to see the error of his ways and our two impossibly good-looking people end up together just in time to kiss on Christmas Eve.
I’ve talked about this general type of romantic triangle once or thrice before, and before we dive in at might be worth going back and glancing over that real quick—it sums up the ground rules of how and why these triangles work.
Y’see, there’s a really basic flaw in how a lot of these holiday movies set up that triangle.  It’s why they always come across as a bit weird and the protagonists always seem a bit... well, wrong.  And I think it’s one of those things that’s really easy for me to avoid once I see it all laid out
Let’s use that basic structure up above for our example.  Our test story, so to speak.  Amy (A) has a meet-cute with Bob (B), who is in a relationship with Kat (C, just to keep you on your toes).  Amy and Bob have chemistry, Kat is bordering on (if not openly) awful and clearly wrong for Bob.  And it’s Christmas because... y’know, that’s when this always seems to happen.
Now, normally in a romantic triangle situation like this, our protagonist would be Bob.  Bob, after all, is the one who needs to make a choice here, right?  He needs to be active and decide if he wants to be with Amy or Kat.

But...
Our protagonist is Amy.  And the only way I can make Amy active in this situation is to make her... well, kinda unlikable.  If she does anything to improve things with Bob—all those standard romance bonding moments like long talks and quiet dinners and heartfelt discussions about shared passions—it kinda means she’s undercutting Bob’s relationship with Kat.  Which is a little rough, morally, no matter what we think of Kat.
And geeeeez, if things get physical to almost any level, well, now they both look bad.  Amy’s making moves on somebody in a relationship.  Bob’s in a relationship and hooking up with someone else.  I mean, how bad does Kat have to be for us to be cool with Bob cheating on her?  And if she’s not that bad, then... well, yeah, he’s a jerk.
And, yes—sometimes odd things happen between people in really specific situations.  Everybody reacts differently to stress and fear and all that.  Firm embraces may happen.  Maybe even a kiss or odd proclamation.  But that’s a reeeeeeeeeeeeeeally fine line.  Scary fine.  It’s so easy for that situation to go from understandable and excusable to what-the-hell inappropriate.
Y’see, Timmy, when Amy’s this point in the triangle, she isn’t the one with a choice to make..  Not a real one, anyway.  She has two options.  She can do nothing (which ends the story pretty quick) or she can try to disrupt Bob and Kat’s relationship.  Those are her only paths, as far as our plot goes, and neither of them is a great one from a storytelling point of view.

I think when writers do this, they’re confusing the outcome with the choices that lead to it.  We’ve all heard “the ends justify the means,” but this tends to ignore the fact that the means I use also determine what kind of end I get.  There are tons of ways Amy and Bob can end up together, but a lot of them can be paths that make one of them—or both of them—characters we don’t really like or care about.  In some cases, we may even be actively rooting against them. Cause they’re horrible people.
Don’t worry about outcomes.  Outcomes are the conclusion of a story.  Think about the path to that outcome.  The choices my character has to make in order to get there.
Because those choices are my story.  They’re my plot.  And if there aren’t any real choices, or they’re all being made by supporting characters, or they’re the wrong kind of choices, or they’re just all bad ones... well...
I shouldn’t be too shocked if people think it’s a bad story.
Speaking of stories, here’ sone last reminder that books make fantastic holiday gifts, and to maybe check this out if you're having trouble affording things this year.
Next time, I wanted to talk a little bit about time.
Until then, go write.