Joyous to all of you celebrating it.  If you’re more the Christmas type, I hope the day was happy and peaceful and Santa got you that one thing that’s been on your mind.  And I hope all of you are looking forward to the upcoming New Year.

Speaking of which... as this year’s winding down I thought it’d be worth going over what got done this year.  I’ve mentioned before, I think, that sometimes people get a really disheartening idea of how much some authors produce on a weekly/monthly/yearly basis because they’ll catch somebody like Chuck Wendig or Victoria Schwab posting about a particularly productive day they had (or Jonathan Maberry posting about, y’know, a day that ends in Y...).  When you’re struggling to squeeze in a few hours a week, it can be kinda soul-crushing to see people who are writing five or six thousand words a day.
So I thought I’d go over all my writing-related activities for the year.  Break down what got done and how long it took.  Keeping in mind, again, that this is my full-time job, so there’s some stuff I consider part of the writing job that might not actually involve writing a specific book.  As we shall see.
Anyway...
I wrote—and rewrote—a good chunk of a book called Dead Moon.  I started it seven years ago and it’s finally coming out in February through Audible.  I think it’s a much better, stronger book than it would’ve been if I’d written it back in 2011.  Partly because I’m a better writer (I like to think so, anyway), partly because I’m gotten to work with a lot of good editors over those seven years and they each pushed me to be a little sharper, a little better.
As you’re reading this, I’m a little over 45,000 words into another book, one that ties together two previous ones I wrote.  Overall, it’s going smoothly so far, although I’ve lost about a week to the flu which led right into the holidays, and also a pulled back early this fall.  I’d wanted to be another 20-25,000 words along at this point, but I’m still happy where things are at.  I’m probably going to do a whole post on this one sometime in the spring, because it’s the first time I’ve really done a book start to finish from a full outline.
Plus I’ve been working on an outline for my next book, too.  Still in the early days, fleshing out a few things, but I’m very excited about it.
I wrote about fifty-five posts here at the ranty blog.  Yeah, the number down on the side bar is a little higher, but a couple of those posts were cartoons or memes or different con schedules.  I’m not sure how many, but enough that I should probably knock at least a dozen off that final number.

Probably worth mentioning that this year I shut down another blog I'd had for a few years. It was mostly about my geeky toy soldier hobby and ways to save money with it.  Truth is, though, I just haven’t had time to put into those paperhammer projects that I used to.  Closing it down took a lot of stress and guilt off my shoulders for... well, not coming up with content for that blog.  So that’s probably something to remember, too.  There are times it’s worth it to stop writing.
Also worth mentioning that this was a pretty appearance-heavy year for me.  I appeared at five different cons, if memory serves, plus a few speaking engagements.  Plus the Writers Coffeehouse, and now the Dystopian/Apocalyptic bookclub at The Last Bookstore.
Finally, a ton of reading.  I didn’t get to read as much as I would’ve liked these past few years, so in 2018 I made it a point that I wanted to read a lot of novels from a variety of authors, and try to read at least one a week.  It was energizing and enlightening and I can’t recommend it enough.  Expand your horizons.  I’m currently in the middle of book 51 for the year, and might even get into 52 this weekend. 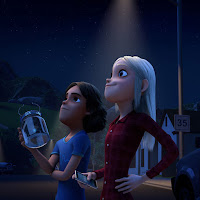 (there was a pile of comics in there, too)
And there’s that.  How this professional writer spent his time this year.  And keep in mind I still had time to binge Lost in Space, Sabrina, and 3Below while also keeping up with my CW shows and The Good Place.
Oh, and move to another city.
Almost forgot that part.
What have you gotten done this year, writing-wise?  Did you hit your goals?  Get close?  Hopefully, if nothing else, it gave you a good sense of where your goals should be.  Did you push yourself too hard, or not hard enough?
There is no right or wrong answer here.  The right speed for you is going to depend on what you want to get out of this and where you're hoping to go with it.  There's no reason for me--or for you-- to compare myself to anyone else. It just matters that I'm getting something done.
Maybe think about that a bit as 2019 rolls closer.
On which note, I’m going to try to get some work done before we lunge into 2019.  Hope the holiday shave been good to you and continue to be so.
Next time, I’ll probably be giving my start of the year spiel.
Until then... go write.