That Figure in Black

Today, I was hoping we could have a quick talk about that mysterious figure across the street.  You know the one.  Over there.  The person in the hat and trenchcoat who’s just standing on the edge of the shadows, watching us as we dig up this old time capsule.  The one who said something cryptic as you walked by.

You know who I mean.

No, seriously.  We all know the character I’m talking about, right?  The one who shows up in the first chapter, spouts a few  statements, and then vanishes for the next three or four hundred pages.  Heck, maybe they don’t come back at all. 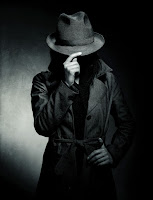 Maybe—and let’s be honest here—maybe we’ve even written a character like that.  I know I have.  It’s okay.  Admitting it is the first step to getting better.

Truth is, characters like this are the one of the reasons so many agents and editors say they hate prologues.  So often, these characters don’t do anything except waste our time building a  false sense of mystery, dropping psuedo-hints that rarely, if ever, amount to anything.  They just... they’re awful.

So... how could we make them better?

Let me ask you this.  Forget the aura of mystery. What if they spilled their guts in chapter one instead?  They’re standing there across the street, then they walk over and just start telling us everything.  I mean, almost uncomfortable amounts of personal information.

What would this character say?

Now, once I know all that... let's look at my original version of this moment.  Is my mysterious figure acting believably?  Naturally?  This is my chance to make sure everything lines up, so my readers—including agents and editors—won’t feel cheated later on.

I’ve talked about something similar to this before—the detective’s speech.  That sometimes it’s worth writing out a chapter I might never use because it’ll help me figure out exactly how things are working in my story.  Because... well, I should know how things work in my story.  And why they work that way.

And why that guy’s sitting in his car across the street, watching us talk.

Next time... Look, I’ll be honest.  Next time might get a little explicit.