My Brush with Greatness

I've been thinking about this all day.  Well, a dozen different versions of this...
About nine and a half years ago I entered an awful phase.  The small-press, first time author looking for blurbs phase.  It’s when you have no credits to fall back on, no industry clout behind you, but you have to somehow get people with both of these things to read your book and say nice things about it.
Needless to say, it’s tough.
Near-impossible.
I, however, had a plan.
Since I’d worked in the film industry, and was still writing about it at the time, it occurred to me that rather than go after recognizable authors, I could go after recognizable actors.  Hunt down some of the cult icons that would mesh with a superheroes-fighting-zombies story.  Their names might not carry a ton of weight in the literary world, but they would with the fans I wanted to reach.
So I called in some favors with people I knew and ended up with a short list of email addresses and phone numbers for certain managers, agents, and small offices.
Alas, it did not go well.

I got no response from most of the emails.  My phone calls were stonewalled.  The best response I got was from Bruce Campbell’s manager, who let me give my spiel and then—very pleasantly and politely, without a hint of malice or snark—told me that Bruce was just too busy to be reading anything at the time.
(Damn you, Burn Notice!  Damn you!!!!!)
I hit the bottom of my list pretty quick.  And it was my biggest long shot.  A comic legend who had an office in LA... an office I’d managed to get the phone number for.
I dialed and ran through the spiel one more time in my head.  The friendly-but-casual-but-confident approach that would get me past the person answering the office phone to the person I needed to speak to, who would then get me to the person I wanted to speak to. Well, I had no illusions about actually speaking to him, but hopefully I could convince that second person to hand off my manuscript to--
“Hey, it’s Stan.”
To be fair, true believers, I’m not 100% sure that’s what he said.  By the time he’d reached the second word I’d recognized the voice.  The voice I’d heard in hundreds of interviews.  The voice that had narrated all those episodes of Spider-Man and his Amazing Friends when I was a kid. 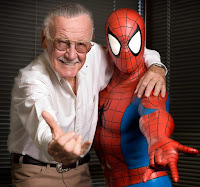 That voice on the phone knocked pretty much every coherent thought I had out of my head.  He was on the phone!  With me!  Right NOW!  I WAS ON THE PHONE WITH STAN LEE!!!
“Hello?”
I was still kind of in shock, but I realized I needed to say something or he was going to hang up.  I still couldn’t get my thoughts in gear, though.  Couldn’t adapt, couldn’t stay professional, couldn’t...
I blurted out my spiel, probably at double time, all in one breath, and ended up asking Stan Lee if I could speak to whoever could get me in touch with Stan Lee.
There was a pause at the other end of the line, then a little laugh, and then “Yeah, just hang on.”  At which point I heard the phone get muffled, handed off, and found myself speaking to someone else who brusquely assured me Stan was far too busy for whatever my request was and click the call was over.
I’m sure he’d forgotten about it five minutes later, but I’ll never forget the brief moments I found myself talking with one of the most influential people in my life.
Well, okay...  babbling at him.  And him taking it good naturedly.
Rest In Peace, Stan.  You were inspirational in so many ways, to so many millions of creators, and I wouldn’t be here today without you.
Excelsior!