Well, it’s that time of year where some ugly truths must be addressed.  Artists only get to make art because they get paid.  Artists get paid when people buy their art.
I’m going to talk to you about buying stuff.
However...
While I do one of these lists every year, I find myself in a weird place right now.  Y’see, I technically haven’t had anything new come out this year.  Which hasn’t happened in... well, about ten years.  I think the last time I didn’t have something new come out—a novel or a story in an anthology or something—was back in 2007. 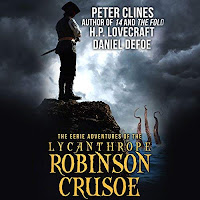 Granted, I do have things out in new formats.  Paradox Bound came out in a wonderful paperback this year.  My second novel ever—The Eerie Adventures of the Lycanthrope Robinson Crusoe—finally came out as an audiobook.  But new stuff...
Look, next year’s going to be crazy.
Anyway, I figured as far as my s own stuff goes... just look at last year’s list.  Or the links above.  That covers just about everything.  Plus, I’m doing my usual holiday deal/promotion with Dark Delicacies—get in touch with them in the next two weeks or so and you can order a personalized, autographed book.  If they’ve got it, you can buy it, I’ll sign it, and they’ll ship it to you.
What I thought I’d talk about instead—sort of combining two annual posts into one—is a bunch of the other books I’ve read this year.  There’ve been one or two I didn’t like, a bunch that were really fun, and a couple that were just friggin’ amazing.
So let me tell you about those.  Then you can go pick them up for somebody special or just add them to your own holiday wish list.

The God Gene by F. Paul Wilson is the latest book in his ICE Sequence series.  It’s a wonderfully creepy story about a missing scientist and evolution.  If you or someone you love likes sci-fi thrillers, this is a great one.  And I think the new one comes out in five or six weeks, so if you like it, there’s barely any wait ‘til the next one.

Kill All Angels is Robert Brockway’s freakin’ masterpiece conclusion to his Vicious Circuit books.  The story of an aging punk rocker and a stuntwoman trying to save the world from Lovecraftian cosmic entities who can unwrite your entire existence.

One of Us by Craig diLouie is a modern masterpiece.  Seriously.  It’s X-Men meets To Kill A Mockingbird, about mutant children growing up in the deep south.  It’s dark and beautiful and—unless something happens in the next four weeks—unquestionably the best book I read this year

Lipstick Voodoo by Kristi Charish is a bit of a cheat on this list.  I got to read it early for blurbs, and it’s not going to be out until early next year.  But if you like the undead, urban fantasy, a bit of naughtiness, and a bit of mystery... you might want to save a gift card for this one.

I kinda stumbled across Copperhead.  It’s a comic book/graphic novel series by Jay Faerber, Scott Godlewski, Drew Moss and it’s just magnificent.  I've seen “western/frontier in space” done many times and many ways, but never as well as this.  It’s fantastic visual storytelling and seriously, Netflix... what the hell?  Why aren’t we all binging this right now?

Damn Fine Story by Chuck Wendig is the only non-fiction book on this list.  it’s a wonderful (and very entertaining) piece about the art of storytelling.  Not writing, but the act of telling stories and narratives and so on.  Chuck says a lot of stuff about character and dialogue and structure that I’ve said here on my ranty blog, but he says it in a much more entertaining way.  It really is a must-have book if you’re interested about any form of storytelling.

The Tiger’s Daughter by K. Arsenault Rivera is about two girls with grand destinies ahead of each of them who decide to forge one together.  It’s a beautiful, truly epic story of love, demons, and women with swords.  In my top five of the year, no question.

Atomic Robo by Brian Clevenger & Scott Wegener is one of those comic series I’ve heard about for years but never read until I got a volume as a housewarming gift.  It’s about a sentient robot built by Nikolai Tesla who now carries on his creator’s work of trying to improve the world while also fighting assorted super-villains and monsters out to destroy it.  It’s ridiculously fun and something for the sci-fi/pulp lover in your life.

The Grey Bastards by Jonathan French is a fantasy novel I first heard about a year or two back (Jonathan and I have the same editor).  I’m not usually much of a fantasy guy, but the idea of this was so clever I had to check it out.  Orc gangs that ride actual hogs and patrol their territories, with all sorts of gang rivalries and politics.  It’s fun, exciting, kinda sexy, and just fantastic.

I Only Killed Him Once by Adam Christopher is yet another series ender.  The final story of Ray Electromatic, the robot detective turned hitman in 1950’s . This time Ray’s on a case that might lead him to the secrets of his past... but first he has to get his current “client” to stay dead.

Girl Like A Bomb by Autumn Christian is another cheat.  This is a fascinating book about what it really means to be your best, mixed with a healthy dose of sex-positivism (new word?  You know what I mean...), and what it’s like to be the person with the unusual superpower that controls all of this.  Unfortunately for you, this is another “save a gift card”  one—it’s up for preorder now and on sale in the spring.

Constance Verity Saves the World by A. Lee Martinez is more fun with the woman blessed (or cursed) to have a life full of excitement and adventure who really just wants to enjoy settling in to her new condo with her accountant boyfriend.  These books are so much friggin’ fun and if there’s any justice in the world we would see them on the big screen.

And real quick, you also can’t go wrong with Heroine’s Journey by Sarah Kuhn, Kill the Farmboy by Delilah Dawson & Kevin Hearne, Zeroes by Chuck Wendig, or any of the Sandman Slim books by Richard Kadrey.  And I may add to that previous sentence in the next week or two.

And there you have it.  A bunch of my favorite things I read this year (even if they’re not available quite yet).  Please feel free to add any favorites of your own in the comments below.
And also, despite all the reference links up above, please think about going to your local bookstore or comic shop to pick up one of these or get it ordered for you.  It may cost you a dollar or two more—and I realize dollars can add up fast this time of year—but you’re supporting local businesses and not the monolithic corporate giants.  That’s something you can humblebrag about until New Year’s Eve, easy.  "Oh yeah--I look for stuff on Amazon, but then I only buy from my neighborhood store."
And also-also—if this is all too much for you, financially, please don’t forget my regular Black Friday offer.
Happy Holidays.
Back to writing-related stuff on Thursday.