Okay as we inch closer to a happy Halloween, I wanted to take a moment to address something I see pop up a lot in horror stories.  Not only horror stories, but in my experience it seems the most common with them.
Plus, as I said, it’s the season...
Remember this story?  A bunch of people get mysteriously summoned to some remote location (often some kind of mansion), start getting picked off by some kind of ghouls or ghosts, and then discover—oh, crap!  We’re the descendants of the people who did this awful thing fifty/ a hundred/ two hundred years ago.  And now these ghosts want their sweet vengeance.

I’ve seen a few variations off this, and you probably have, too.  Phoebe’s perfectly happy to live in everybody’s shadow... until she isn’t. Yakko’s seemed perfectly sane... until it’s revealed he’s been completely mad the entire time we’ve known him!  That statue’s sat quietly in the museum since the 19th century... until sundown today, when it opened a portal to hell.
So here’s my important question for you.
Why now?
Why is this happening now?  What made super-shy Phoebe decide this is the week she has to ask Wakko out to the upcoming dance?  Why did Yakko’s mask of sanity finally slip away?  Why did the ancient portal open in the museum tonight?  Why did the ghost choose this weekend to send out the summons to its deadly party?
Why now... and not a dozen times earlier? Why not six days ago?  Or six months ago?  Or six decades, in some of these cases?
The real issue here is motive.  Why is my character doing this?  And a big part of motive is knowing why they’re performing these particular actions at this particular time.  Even for things like ghosts or ancient portals, something has to be kicking them off.
Let’s look at those ghosts again (it is Halloween, after all).  I mean, those ancestors did their awful thing a hundred and fifty years ago.  There’s at least five generations between them and my characters.  Has everyone been getting mysterious invites out to the old mansion?  How the hell did any of them ever have kids, then?  Or have the ghosts been really incompetent up until now when it comes to reaping sweet vengeance and none of my relatives ever bothered to mention it? 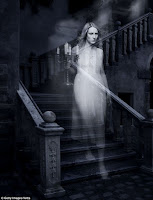 And if mom and dad and grandma and grandpa haven’t been getting invites... well, what’ve the ghosts been waiting for?  Is tonight an anniversary of some kind?  A cosmic alignment?  Did one of the realtors spill an urn of ashes or unlock the attic or decide they’re bulldozing this place on Monday?
I’ve touched on this idea before—plot being active while story is more passive.  Even if the ghost are my antagonists (and dead), they’re still characters with their own story.  What’s happened that’s made them finally spring into action?  Either they’ve been doing it all along—which would imply a history and a bunch of evidence from previous attempts—or something has changed.  Drastically changed, in some cases. What outside force has caused this story to happen now instead of... some other time?
Y’see, Timmy, writing a book—any kind of book—is kinda like solving a crime.  I need to know all the motives.  All the answers to what and why and how and when.  I may not have characters blatantly explaining them within my story, but they should definitely be there if people look for them.
Because if they’re not there...
Well, then I’m writing a really lifeless story.
Next time...
Holy crap.  Next time is November.  The year’s almost over.
But more importantly (for some of you)... it’s NaNoWriMo.
Have a Happy Halloween
And go write.