Quiet moment for Prince while you all sing the next line in your head.
And... moving on.
It being the Halloween season, I thought it’d be worthwhile to blab on about something I’ve referred to once or thrice here as the insanity defense. Like most times you’ve heard this phrase invoked, it’s a cheap cop-out.  While it’s most noticeable in films and television, you can also find it in books, and in several graphic novels. 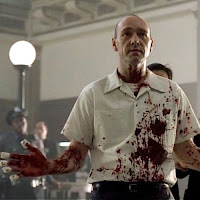 The insanity defense is when our heroes have spent the entire story chasing a killer.  It’s not always a killer, mind you.  Might be a stalker who hoped for the big leagues, weirdo in a clown suit, something like that.  Anyway, they run down clues, have close calls, and spend the whole time trying to make sense, one way or another, of what’s been happening.  And finally, at the end, our mysterious killer is cornered and his secret revealed for all to see...
Alternately, sometimes certain events or moments just have to happen in my story.  It’s been all plotted out and I need a reason for the characters to do this so that and that can happen a bit later.  I also know I need an in-story motivation for these events, no matter how bizarre or unlikely they are.
Faced with these challenges, sometimes I might be tempted to fall back on the easiest solution I can.
I’ll say the character is insane.
Now they don’t need a motivation, right?  He or she is just doing this stuff because, well... they’re insane.
Alas, this is pretty much hands-down the laziest writing I can ever do (not to mention kinda insulting to anyone suffering from actual emotional or mental issues).  All characters need a solid reason to do the things they do, and when I decide to use insanity as a justification for any of my character's actions, abilities, or behaviors, it just shows that I’m too lazy to work out a real motivation.  The plot needs to be driven forward, and there’s no logical reason for this to happen, so I’ll just say someone’s crazy and relieve myself of the need to be logical.  It’s a cheap way to hide my button-pushing.
Just to be clear, madness in and of itself is not a bad thing (speaking from a character point of view, of course).  The Joker.  Renfield.  Hannibal Lecter.  Calvin “Cal” Zabo.  All of these characters are insane to different extents and are all pretty much magnificent either in print or on the screen.
Thing is, the writers behind these characters all realized the key point I’d like to make here.

The Joker believes he can prove that everyone, at heart, is ruthless and psychotic,  just like him.  Renfield believes eating insects and spiders means he’s eating their life-essence and extending his own.  Hannibal Lecter doesn’t consider himself bound by the standards and taboos of the human race, giving him a cold ruthlessness that sometimes makes the Joker almost look normal.   The writers behind these characters didn’t just fall back on “they’re insane.” Each character has an actual motivation for their actions.
A few times here I’ve mentioned my fairly awful college novel, The Trinity.  In said book, the antagonist is insane.  As he sees it, in the book of Genesis, God rewarded Abel for sacrificing a sheep but turned his nose up at Cain’s much larger sacrifice of harvested fruits and grains.  When Cain did spill blood later (Abel’s), God “rewarded” him with a mark that said no man would ever be able to lay hands on him.  Based off this, my villain's determined God wants us all to kill as many people as possible.  A twisted interpretation, granted, but see where it's coming from?  He’s not killing people because he’s insane, he’s killing them because, from his point of view, this is what God wants.  We can point at it and say he’s doing Y because he believes X and expects Z as a result.
There’s an old joke you’ve probably heard that goes like this--one definition of insanity is repeating the same action over and over and expecting different results.  But let’s consider that for a moment.  The implication is that Yakko is choosing to repeat a given action (let’s say, shoving baloney into his pants) because it’s his belief that the outcome of this action will be a certain, predictable result--just not the one he’s getting.  He isn’t just shoving sandwich meat down there for no reason.  He has a motive fueled by what he sees as logical expectations.
Y’see, Timmy, insanity is not a motivation.  It’s the lens the characters are seeing their motivation through.  Madness doesn’t make them irrational, just... differently rational.  To quote another joke, “Just because I’m crazy doesn’t mean I’m stupid.”
Now, there is still a place for that sort of mindless madman (or madwoman) gibbering in the corner, lurking in the attic, or chopping up attractive teens at the old summer camp. But we’re probably going to talk about that in two weeks, as we get closer to Halloween.
Next time, I’d like to talk about the Game of Rassilon.
Until then... go write.