That’s right.  Taking requests and playing the hits you ask for.

Probably one of the most common thing writers hear is people asking about turning ideas into stories.  “Oh, I’ve got a really great idea, I just need someone to help me turn it into a book.”  I get messages like this four or five times a year.  When it’s from friends, I try to be really polite and explain why it doesn’t make much sense for me to help with their idea when I’ve already got far too many of my own to work on.  When it’s someone I don’t even know...
I usually just ignore those messages.
Still, the unspoken question there is a valid one.  How do you go from clever idea to full-fledged book or screenplay?  How does a writer go from “bugs in amber have dinosaur DNA in their bellies” to Jurassic Park?
Let’s talk about that.
Now, as usual, nothing I’m about to say is a hard-fast rule.  A lot of it comes from a talk I had a few Christmases back with writer/director Shane Black (best known for Lethal Weapon, The Long Kiss Goodnight, Kiss Kiss Bang Bang, the upcoming Iron Man 3, and a string of really awful dirty jokes in the movie Predator).  He had a few thoughts on how to assemble a story that I thought were very insightful, and I’m going to use his general framework to address this week’s topic.
Having said that, just to make things less confusing, from here on in I’ll be referring to our collection of words as “a novel.”  It’ll be clear why as we move on.  Depending on what you want to write, feel free to swap “novel” out for screenplay, short story, epic poem, or whatever.
If I’ve got an idea for a novel, I want to look at it in terms of plot and story.  Can it expand into a full plot?  Does it lend itself to a strong story?
Let’s go over each of these terms.
Okay, first we need to understand what the plot is.  If I’m writing a book, the plot is what’s going to be on the back cover.  If I’m writing a screenplay, it’s going to be what they put on the back of the DVD.  Simply put, the plot is the chain of events that make up the novel.  It’s what makes readers need to turn the page so they can find out what happens next.
It’s important to remember that one idea does not make a plot.  “There’s a haunted castle,” is not a plot.  “My partner is a robot,” is not a plot.  “I want to go to the prom with a cheerleader/ quarterback,” is not a plot.  A lone idea is just a plot point, and basic geometry tells us we need multiple points to make something worth looking at.  That something being a novel (or screenplay, epic poem, etc.).
If I’m describing a plot, I’m going to use a lot of conjunctions.  I’ll be using and, but, and or to string all those plot points together.  Take a look at this example...

Indiana Jones is an adventurer who finds ancient treasures and he’s a professor of archaeology at a university.  The government hires him to find the Ark of the Covenant before the Nazis, but the Nazis have a head start.  Indy goes to find his old mentor, but finds out that Abner has died and his daughter has a grudge against Indy.  The Nazis show up and Indy and Marion fight them off.  They travel to Cairo and meet Indy’s old partner, Sallah, but learn the Nazis already have their excavation well under way.  The Nazis try to have Indy killed in the marketplace and he fights them off again, but Marion is killed when the getaway truck explodes.  Indy and Sallah get the medallion deciphered but it turns out there are two parts to the inscription and the Nazis only have half of it.

See what I mean?  Lots of points, and I’ve barely written out half the movie.   It’s also worth re-noting then none of those ideas on its own is a novel.  It’s when they start joining up that we get something that interests us.
This is where a lot of people mess up the whole idea of “expanding an idea into a novel.”  Y’see, Timmy, an idea doesn’t expand.  The plot expands as more ideas are added into it.  It’s impossible to expand “Indy and Sallah get the medallion deciphered” without adding a new element to the mix.  Seriously, try it.  Any attempt is just going to be some artificial wordplay and padding until I bring “it turns out there are two parts to the inscription” into it.
It’s also worth noting another key thing.   For most good novels, the plot is the attempt to do something.  Not necessarily succeeding at something, mind you, but attempting to do it.  Beat the Nazis, save the girl, beat the system, save the clock tower, and so on.  Plot is active.  In that little summary up above, ten of the eighteen points are characters physically doing things.
Listing these points out can also be a hint that my story is getting a little thin on plot.  If I’m really stretching to come up with individual points, or falling back on a lot of inactive, internal points, that could mean my novel is veering into more of an artsy-character range.  If a lot of my points don’t really tie back to the main thrust of the novel, that’s another good sign.  There’s nothing wrong with that, provided I knock the character stuff out of the park.  Which brings us to our next point.
Now, if plot is what goes on around the characters, the story is what goes on inside the characters.  Plot is big and external.  Story is small and intimate and internal.  It’s the personal stuff that explains why the characters are interested in the plot.  And if it’s why the characters are interested, it’s also why the reader is interested.  Plot makes us need to turn the page, but story makes us want to turn the page because we’ve come to like these characters.
A great example of plot vs. story is Silence of the Lambs.  The plot is the search for a missing girl, and some of the desperate decisions and deals the FBI will make to find her.  The story is about Clarice Starling trying to make up for what she sees as an awful failure in her childhood, and how much of her life is shaped by the need to balance that failure.
I’ve said a few times here that characters are key to a successful novel, and that’s because without good characters you can’t have a lot of story.  I can have a ton of plot, but not much else.
Now, because of this, developing an idea into a novel is a little tougher from the story side, because it involves developing characters.  How the characters react to the idea depends on who they are and how this idea interacts with their personality and history.  Which means they need to have personalities and histories.  And a lot of this can just come down to asking and answering questions that relate back to that original idea. 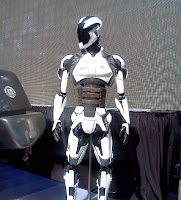 Let’s go with the one I mentioned up at the top—my partner is a robot.  Let’s say my character is Bob.  Did Bob know this partnership was coming or did it get sprung on him?  Does he like being partnered with a robot?  Does he like robots in general?  What kind of partnership do they have?  Is Bob the junior or senior partner?  Why?  Do they work well together?  Does Bob have weaknesses the robot will compensate for (or vice versa)?
The answers to all of these questions expand the story.  Odds are that some of the answers will lead to more questions, too.  And more questions means the plot is expanding.
As above, this can also be a hint that my novel is a little weak on the story side of things.  If I just give quick, inconsistent answers to these sort of questions, my characters are going to end up pretty flat.  Character arcs are a big part of the story, so if my character never changes in any noticeable way, it probably means my novel is emphasizing plot over everything else.  There’s nothing wrong with that—there are plenty of fantastic plot-driven  books and movies—but it does mean I need to have a really solid, engaging plot.
It’s important to notice that story is why so many novels can use the same plot but still be very different.  Alan Moore’s Watchmen has the exact same plot as the classic Outer Limits episode “The Architects of Fear," but they have different stories.  The same with Never Let Me Go and The Island.  While the basic idea is the same, the character tweaks make each of these into unique stories.
Consider this—how much does the story of Raiders of the Lost Ark change if I just do a gender swap on Indy?  Start way back with her relationship with Ravenwood’s underage son.  Would this still cause a falling out between the two professors?  How would the son view this past relationship?  And in the late 1930s, what would it be like for a female professor?  The male students hitting on her in class is a very different image, and would the government men be as enthusiastic when they learn Dr. Jones is a woman?  Our basic plot wouldn’t need to change too much, but all these story elements become very different.
So when you’re looking to take an idea all the way to a full blown novel—or screenplay, epic poem, opera, or whatever it is you write—start with the basics.  Consider your idea as part of a larger plot.  Think of how it could fit into a character’s story.
This week was kind of long and rambling, so next week I might just do something quick.  Whatever pops into my head.
Until then, go write.